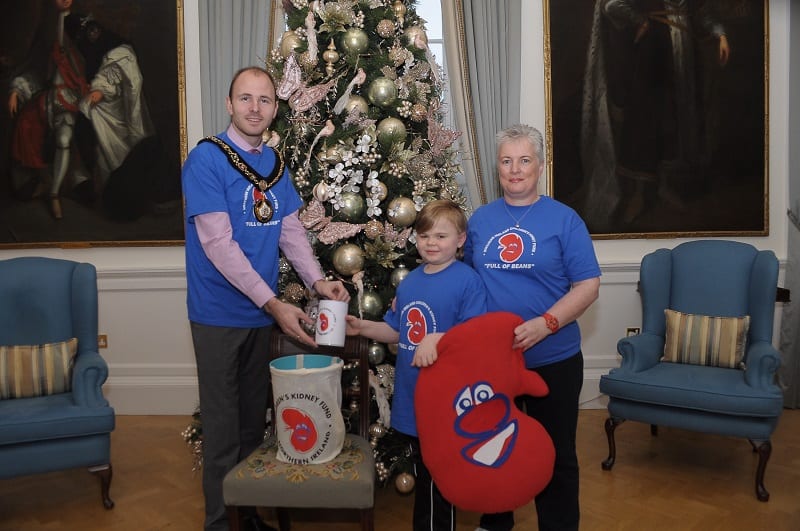 An 11-year-old Armagh boy – who received a life-changing kidney transplant from his mum – is planning a fundraising initiative in the New Year to help others.

Collum Coffey is intending to ‘Doc the Choc’ – giving up his favourite chocolate bars for the month of January.

And he is encouraging other people to do likewise – by donating the price of a chocolate bar once a week for four weeks for the Northern Ireland Children’s Kidney Fund.

Collum – who was diagnosed with kidney failure at birth – hopes to raise enough money to support children travelling to the Transplant Games in Liverpool next year – as well as raising money for two dialysis machines.

Collum has been on dialysis and was tube fed from birth because his digestive system was shutting down.

In April 2012, when he was eight, he had a kidney transplant from his mum, which was successful, but he will be on anti-rejection drugs for the rest of his life.

Giving up chocolate will be a huge sacrifice for Collum. Mum Christina told Armagh I: “Before Collum had his kidney transplant, there’s so much that kidney patients can’t eat and chocolate’s one of those things.

“You can eat these things while you are sitting on a dialysis machine.

“These kids can’t enjoy Christmas like all the rest of us. Every child goes into the shops and says can I have a selection pack and these chocolates and all that. So chocolate’s nearly a bigger thing than Santa Claus. All these children who are on dialysis save up their selection packs and all their Christmas chocolate and bring them into the hospital with them.

“But three or four hours a week – normally four or five hours a week – these kids can sit and eat all their Christmas chocolate and selection packs. The minute the dialysis machine is switched off the chocolate disappears and it stays in the dialysis room until they come back the next day.

“People don’t realise what they are going through. Christmas is not normal for them. Birthday parties, Christmas parties, weddings – all these events. They can’t even go to McDonalds. It’s a way of life so they learn to live with it.”

For all these children it’s not all the same and Collum wants to help others.

“Not everyone’s lucky enough to get a kidney like Collum,” said Christina. “Collum got his kidney from me four years ago this April coming and when you have a perfect functioning kidney that’s doing really well like Collum he can eat anything.

“Most people who have a transplant they all love their favourite food, which for Collum is chocolate and he loves it. He would eat chocolate three or four times a day if I would let him.”

But not in January.

Added Christina: “Collum’s gonna ‘Doc the Choc’. He’s going to give up chocolate for the whole month of January, and every time he wants or feels like a chocolate bar he’s going to donate the price of that chocolate bar to the Northern Ireland Children’s Kidney Fund.

“He’s asking everyone all over the north of Ireland that we can reach to donate the cost of one bar of chocolate once a week for a month – that’s basically four weeks giving up the price of a chocolate bar.”

Christina explained that Collum had had “quite a rough year” but was determined in his fundraising endeavours.

She explained: “Collum ended up with brittle bones which meant that all his bones were ragged and tend not to develop properly and he ended up in a wheelchair for a while because his knee bones had fused together. He went at the end of April and got two knee replacements, two femur extensions, and he’s out now walking about and running about.”

Collum’s mum said her son had attended the Transplant Games this year and wants to help others to go.

“Collum has decided he would like to raise the money and awareness to bring kids over to the Transplant Games next year in Liverpool,” said Christina, who added that he also wanted to try and purchase two dialysis machines.

The fundraising idea actually came about while he was in Musgrave Park Hospital for knee surgery in April.

And the young Armagh boy hopes people will show their support.

Christina said: “We are appealing to anybody and everybody, even just for a workplace that has a volume of staff – staff can do it. We are going to have loads of donation points in and around Armagh and we are hoping to get them further afield too.”

To help, donate to the NI Children’s Kidney Fund, Renal Unit, Royal Children’s Hospital, Belfast or by contact Christina on 07749906957.