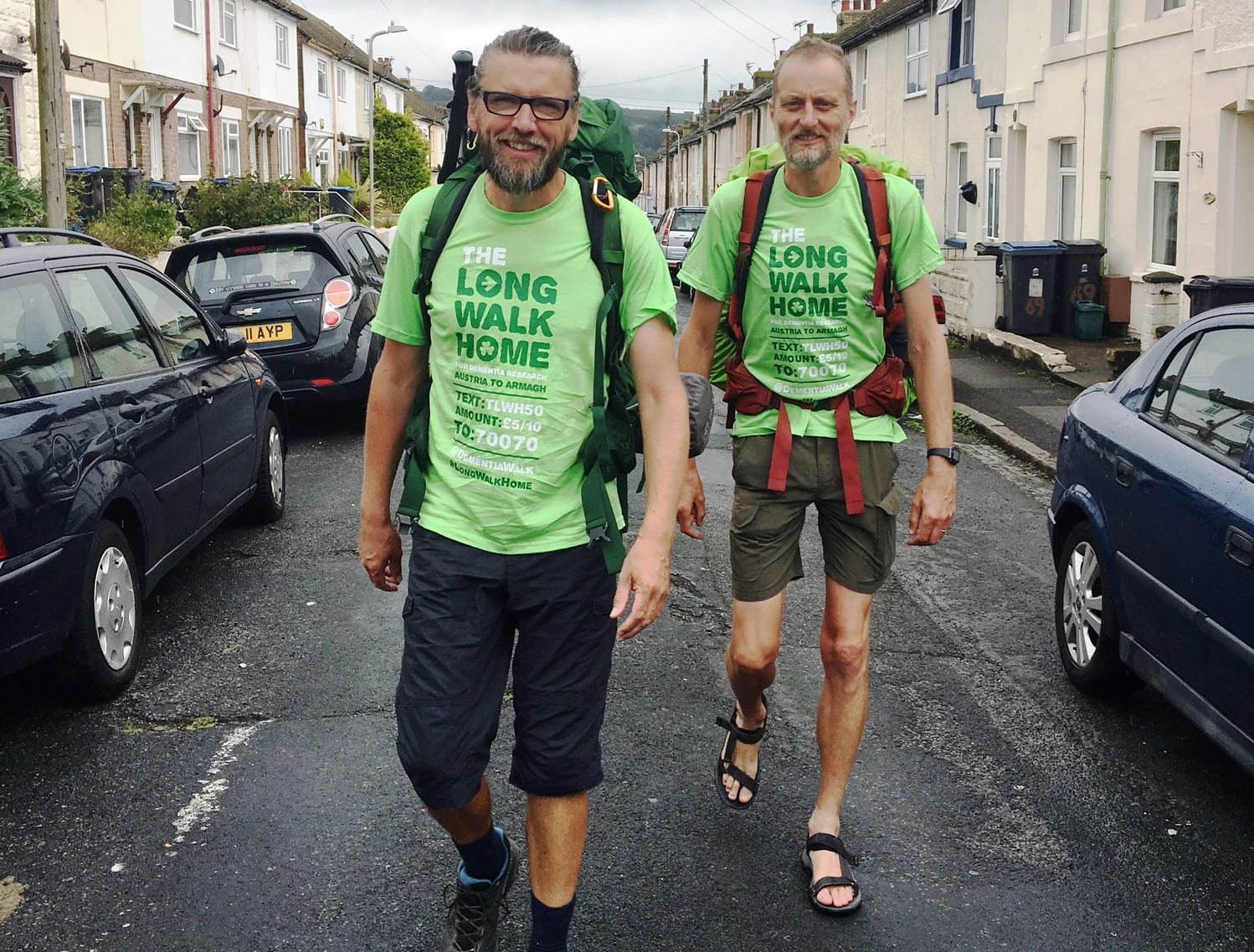 A county Armagh man trekking across Europe to highlight the importance of dementia has arrived in Dover.

‘The Long Walk Home’ – a 2,500km+ Trek across Europe to Highlight the Importance of  Dementia Research Arrives in Dover, England for GB leg

Keady man Eamonn Donnelly and his good friend Sepp Tieber from Graz in Austria have arrived in Dover, England after chalking up over 1500km of their epic 2,500km (1,550 miles approx) expedition across Europe to Northern Ireland to raise awareness and much needed funds for dementia research.

Walking, climbing and camping, totally unaided throughout their trek, the pair recently caught the ferry from Calais to Dover, for the UK leg of their journey.

Over the coming weeks, they will now walk cross Southern England and then Wales to catch another ferry from Fishguard to Rosslare in Ireland for the final home leg to Eamonn’s native home in Keady in County Armagh, Northern Ireland.

It is aiming to increase awareness about the importance of this issue given the exponential growth of the disease in recent year, while also raising funds for dementia research in the UK, Ireland and Austria.

It has enlisted the support of The Alzheimer’s Society in the UK as well as The Alzheimer Society of Ireland, who will both benefit from funds raised by the trek.

While Armagh is still the place Eamonn calls home, he has lived in Austria since 1990 along with his wife and three children. Here he teaches English as a foreign language, but also with Sepp formed the Irish band Boxty which plays all over Austria and further afield.

In the last year, they came up with the idea of ‘The Long Walk Home’, borne out of a frustration about the disease. Eamonn outlines his motivation for the trek;

“The idea for ‘The Long Walk Home’, from my adopted home near Graz in Austria to my native home in Keady, Co. Armagh, featured in many a late-night pub talk, but that’s where it started and ended. When my mother Margaret passed away a few years ago, after suffering from a rare and extremely aggressive form of dementia, the idea took on a whole new meaning and purpose.

“Frustrated and feeling helpless that nothing could be done to alleviate the symptoms let alone cure this cruel disease, it became apparent to me and my family that much more needed to be done to understand and tackle it. ‘The Long Walk Home’ is a very small step along the way to doing just that, hoping to raise awareness and much needed funds for dementia research, while also honouring the life of an amazing wife, mother, grandmother and friend.”

The two men set themselves a challenge to do the trek the old-fashioned way, climbing, trekking and camping all the way across Austria, Germany, France, England, Wales and Ireland. The fact that it has coincided with Eamonn’s 50th birthday also added a particular incentive.

Now seven weeks into the trek and over 1500kms down the journey has been marked by many ups and downs, both literally and emotionally. Having arrived in Dover, the men plan to reach Fishguard around 30th August to catch the ferry to Ireland. They then hope to reach their final destination around 8th September.

They are recording their trek and journey via their website through a written and video blog here. This is where you can also make a donation through a variety of means including online and via Text. They will be supported by the Alzheimer’s Society in a number of key towns across England and Wales to raise further funds as they pass through.