Councillor asked to bring 'hate crime' to attention of PSNI 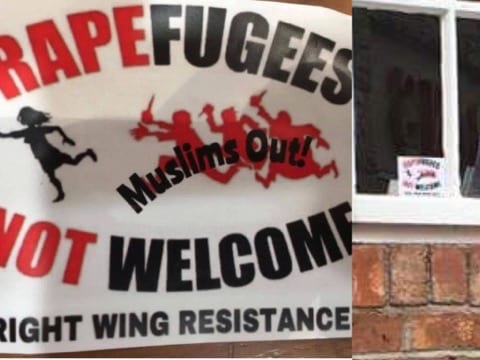 Business owners in parts of Armagh city centre have been forced to remove sick stickers and posters pasted acoss their premises.

Several were spotted in McCrum’s Court, with more at Market Street and Thomas Street.

They bear the sickening slogan ‘Rapefugees Not Welcome’ and the words ‘Muslims Out’.

One business owner, who did not wish to be named, described them as “disgraceful”.

She said: “Someone came into the shop and told me there was a one outside and I went to look. I was disgusted. To think that people are putting these up – it’s just stupid and what does it achieve?

“I have raised the matter with a local councillor and asked that they take it up with the police. This is a hate crime and needs to be investigated.

“This is not the impression that we want people to get from Armagh. This is not what our city is about.”