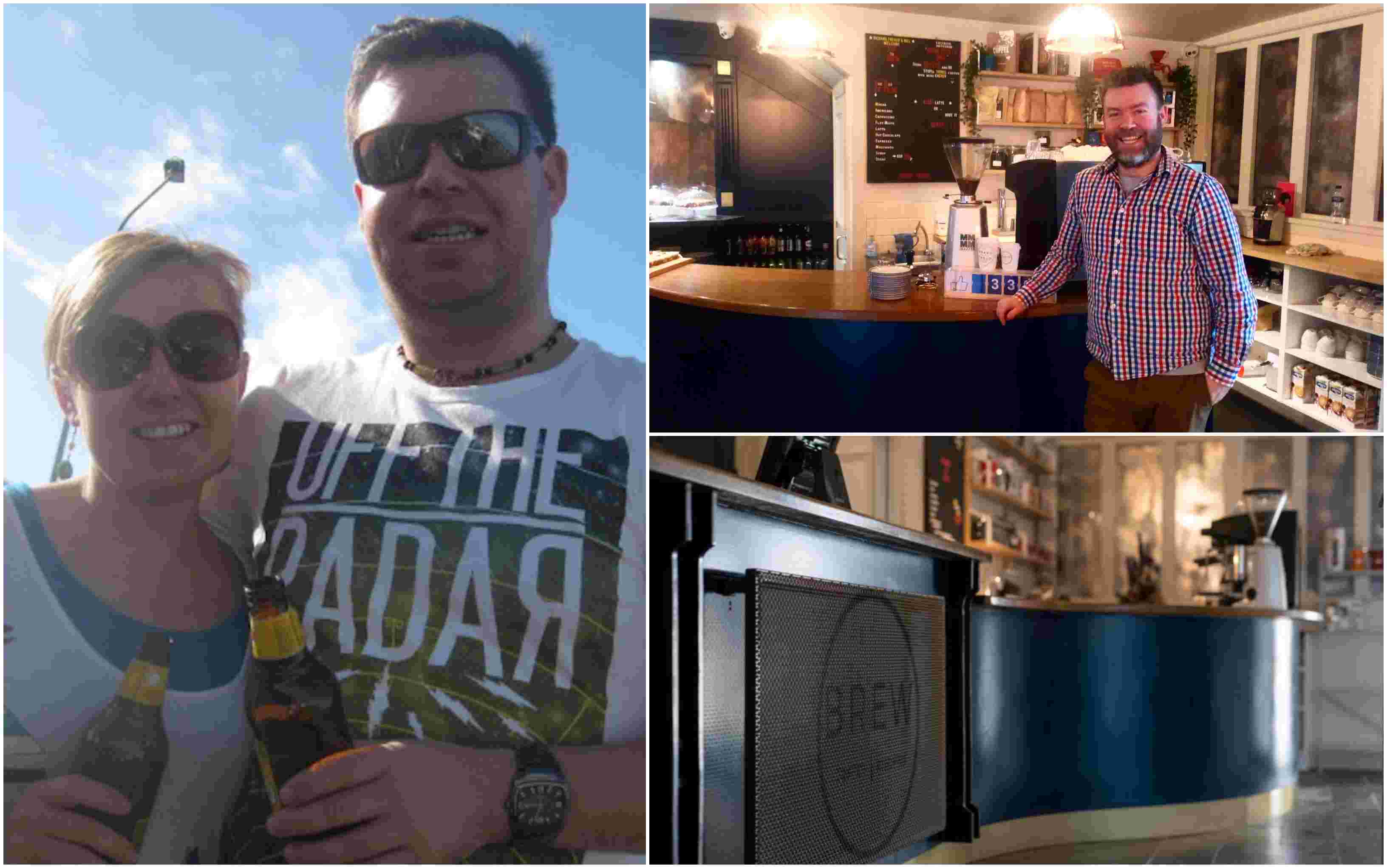 From Armagh to Tasmania, Melbourne to Moy, one prodigal son has brought his worldly experience back with him to create one hell of a cup of coffee.

Richard Allen, co-owner of Brew Coffee, Moy, says: “When I left for Australia in 2000 there was no way I would think I would be back here selling coffee, I probably didn’t even drink coffee back then”.

Born in Armagh, Richard attended the Royal School before taking up jobs as a postman and a petrol pump assistant.

However, around the turn of the millennium, he left the green grass of home to find pastures new, like so many of his fellow countrymen.

Sitting in his urban-styled café of exposed brick and piping, just off the Square, Richard explains to me the many twists and turns which led to Brew Coffee’s inception.

“Around 2000, I left for Australia and I lived there on and off for about two years.

“I went back out in 2005, I met my wife Mel and we lived in Tasmania for seven years before Melbourne for a further three”.

Whilst in Tasmania, Richard worked for a brewery called Boag’s, which would eventually be bought over by the Heineken group.

Speaking of his time on the island, he said: “Tasmania was beautiful, a really stunning place, it’s about the same size as the south of Ireland but only about half a million people live there”.

Richard immersed himself in this idyllic county with long sandy beaches and diverse wildlife.

“The people are generally a bit friendlier than other places I have been.

“They are very much in the same ilk as the Irish they are very laid back and community orientated.”

Working for the brewery Richard had to travel all over the island visiting small country pubs.

“In Tasmania, these were centres for the community because it is such a big landscape.

“I had worked in bars when I was backpacking, but this was the first time I began taking in what made certain places more popular than others.

“I began saying to myself, what are they doing that’s working?”

Richard took up his Australian citizenship as soon as he could and in his own words thought he would never come back.

However, this would all change in what was meant to be a one-year sabbatical.

“I found myself living in the outer suburbs of Melbourne, you don’t know your neighbours you lose that sense of community.

“We both had great jobs; Mel was working in recruitment and I was still working for the brewery, earning good money but we just got caught up in the corporate cycle.”

Richard had taken a promotion to become a key account manager, but he felt that something was missing.

“I’d gone from being on the road to an office job, I just needed to do something different.”

After getting married in 2013, Richard and Mel decided to take a year off and head back to Northern Ireland.

So, with that, they put all their furniture into storage and rented out their home.

“The plan was to come back here do a bit of travelling, reconnect with some family and see how it goes.

“What really happened was we found this lady’s café across the square called Café Marengo.

“She was looking to get out and we just happened to be in a position to take it on.”

With that, Richard’s first venture was born – the Moy Larder – and that stay ended up being two and a half years.

“We didn’t really think we would be here for that long,” he said. “Our house was still in Melbourne being rented out and our furniture was still in storage.

“In my head, I thought we will run this for six months to a year then sell it and maybe make some money on it, the plan was always to return to Oz.”

After selling up the couple stayed put in Australia for just 12 months before deciding to return.

“We enjoyed being back in Australia, we caught up with Mel’s family, but we couldn’t really see ourselves staying there,” Richard admitted.

“I think we underestimated how much we enjoyed village life, Moy’s a really good community – five pubs in the village, people are friendly close to the motorway.”

Upon their return they began looking for property to open up shop, searching from Armagh to Belfast and even as far as Donegal, before ending up back in Moy.

Richard explains that the building had acted as a pub for around a hundred years and had operated under various names, most recently “The Sly Fox”.

However, when he came to take over last year it had been lying empty since 2010.

“A fair bit of work had to go into the place but luckily a friend of ours, Enda Devlin, who has worked on projects all over helped us out with the design.

“He did things with the café that he wanted to showcase, we had some input, the brick was there and the wood panelling, but I came in one day and he had a blow torch to the wall.

“I thought to myself what on earth is he doing”.

The café really is a blend of new and old, from exposed brick which has been scorched to mirror glass panelling.

“We know that if we do that, the rest will follow.”

One thing that sets their coffee out from the many like it is the simple and unique fact they roast their own beans on site.

Mel was the driver behind this, and she is the one who does the roasting.

“When we knew we were going to come back and open our own café, she wanted to learn something new, a skill.

“She took a couple of courses and bought a coffee roaster, a big shiny chrome one.

“That’s her thing, she finds it therapeutic; it’s almost like a hobby for her she loves it so much.”

Richard, on the other hand, would prefer to be at the front of the shop working with the coffee machine.

“We can roast the best beans out the back and then some fella on the coffee machine can make a complete hash of it.

“Our guys are all trained baristas, I suppose years ago, I thought the term barista was a fancy name for a person who works in a café, but it’s definitely not,” joked Richard.

It is all a real family affair with Richard’s brother Trevor also acting as a co-owner in the business.

The café offers a wide-ranging food selection, with inspirations from across the world, but with a focus on local produce.

Richard explains that following Brew Coffee receiving its liquor licence earlier in the year he has launched Tapa’s Thursday in the restaurant.

“Our chef is half Mexican, so she has a very different outlook on food, I think everyone involved in the business has done a bit of travelling.

“A lot of people, like ourselves that have been away and came back, be that university or working overseas.

“They are the sort of customers we are getting through the door.”

The business will be celebrating its first birthday in April and it can only get better from here.

Richard says they have already begun looking at wholesaling their beans to other cafés and restaurants.

They already grind and sell beans for customers to bring home with them, along with equipment for brewing the perfect cup of coffee.

He explained that the name for the coffee Bravo Tango came from the postcode of the Café – BT.

Looking back on the experience Richard stated: “My first job in Armagh was as a postman it has been a great journey and I am glad I left when I did.

“When I left for Australia in 2000 there was no way I would think I would be back here selling coffee, I probably didn’t even drink coffee back then”.