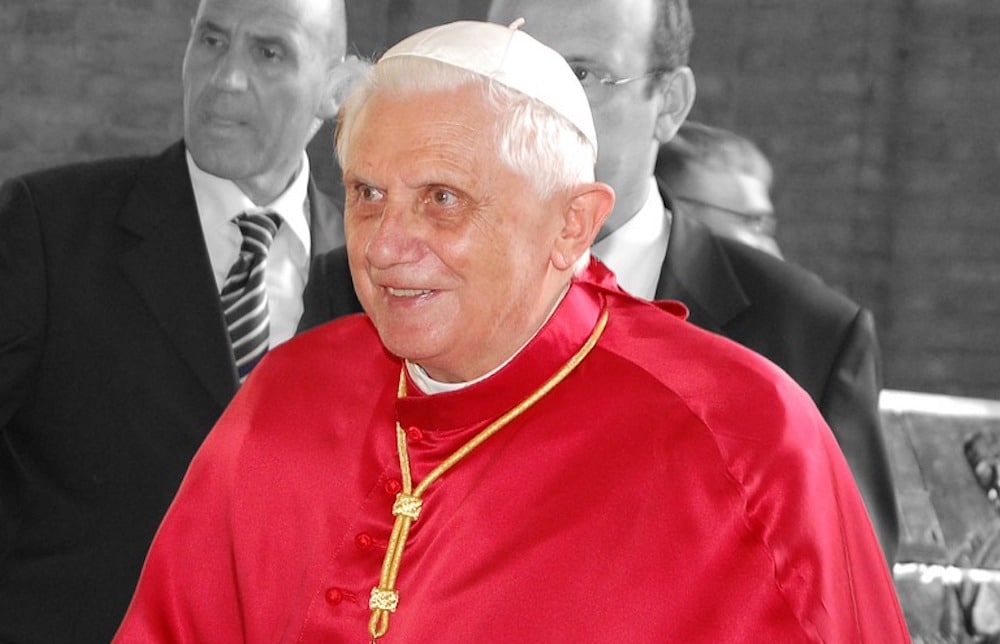 A Book of Condolence will open at St Patrick’s Roman Catholic Cathedral in Armagh following the passing of Pope Emeritus Benedict XVI on New Year’s Eve.

The head of the Catholic Church in Ireland, Archbishop Eamon Martin, said the former pontiff will be remembered for his “characteristic humility and gentleness”.

Benedict led the Catholic Church for less than eight years until he became the first Pope to resign since 1415.

He was succeeded by Pope Francis in 2013.

“I am saddened to hear of the death of Pope Emeritus Benedict XVI,” said Archbishop Martin.

“At this time of mourning in the Catholic Church throughout the world, we remember his gentle soul in prayer, asking God, in His great mercy, to forgive his sins and human failings, while rewarding his generous service and complete dedication to the Gospel and to the Church.

“On behalf of the Irish Bishops’ Conference, and the faithful across Ireland, I extend sympathy to Pope Francis, to the family members and carers of the Pope Emeritus, and to all those in his native Germany and around the globe who loved him and will mourn his loss. Most Reverend Archbishop Eamon Martin gives a speech at the official opening of the Benburb Priory Library and Museum. .MW4456

“On that rainy day in April 2005, when the entire world had its eyes fixed on the new pope, Pope Benedict XVI described himself as a ‘simple, humble worker in the Lord’s vineyard’.

“As Cardinal Joseph Ratzinger he had already been working closely with Pope Saint John Paul II through the final years of the Cold War and the beginning of a new millennium, the fall of communism in central and eastern Europe, growing globalisation and the emergence of an international threat of terrorism.

“During his own pontificate Pope Benedict witnessed powerfully to faith, hope and love – the three theological virtues – about which he wrote profoundly in his encyclical letters: God is Love (Deus caritas est); Saved by Hope (Spe salvi); and, The Light of Faith (Lumen fidei) – which was completed by his successor Pope Francis.

“On a personal level, it was his characteristic humility and gentleness which struck me when I first met him in 2009 while visiting the Vatican as Executive Secretary to the Irish Bishops’ Conference.

“I found him to be calm and softly spoken, kindly and personable, and genuinely interested in the Church in Ireland.

“Having met the Irish bishops in Rome in February 2010, he issued a unique Pastoral Letter to the Catholics of Ireland expressing profound sorrow for those grievously wounded by abuse in the Church.

“The then pope called for urgent action to address the legacy of abuse which, he said, has had “such tragic consequences in the lives of victims and their families”, and which has “obscured the light of the Gospel to a degree that not even centuries of persecution succeeded in doing.

“Pope Benedict XVI’s interest in Ireland goes back to his friendship with the late Archbishop Kevin McNamara of Dublin when both were young theology professors.

“Former students of the Pontifical Irish College, Rome, also remember fondly his visit there as cardinal. He often admired the huge contribution of generations of Irish men and women to the Church, and to humanity, and he took a special interest in the work of early Celtic missionaries like Saint Columbanus to the spread the Gospel in Europe and to Europe’s spiritual identity. He followed closely, and prayerfully, the peace process as it matured.

“Although unable to travel to Ireland for the 50th International Eucharistic Congress in 2012, he delivered the key televised address to participating pilgrims.

“His message then, about the Church as communion, recalled his remarkable 2007 Apostolic Exhortation Sacramentum Caritatis in which he speaks of the Holy Eucharist as a mystery to be simultaneously believed, celebrated and lived.

“Pope Emeritus Benedict XVI was a person of deep spirituality and prayer, an outstanding apostle of Christ. With his great capacity to listen combined with a personal, discreet charm, the late pope was able to win people to Christ wherever he was: during the World Youth Day celebrations, he attracted the attention of thousands of young people; his encouragement for the World Days of the Sick, World Meetings, and his many travels around the world and meetings with other religious leaders, politicians and academics.

“I remembered his commitment to service when I wrote in early January 2013 to accept my appointment by him as Coadjutor Archbishop of Armagh, just one month before he humbly resigned the papacy due to failing health.

“Pope Benedict XVI understood the need and potential for all people of goodwill to work for the realisation of the common good. On social doctrine more broadly, he emphasised that charity must always be rooted in truth in order to be fruitful (see Caritas in Veritate).

“On the eve of his election to the Petrine Ministry, the then Cardinal Ratzinger incisively identified a tendency in society to lapse into ‘a dictatorship of relativism.’ At the same time, his papacy was marked by a commitment to dialogue between faith and reason, between the Church and the modern world, and to ecumenical and interreligious dialogue, as evidenced on his significant apostolic journey to the United Kingdom in 2010.

“In his lifetime, Pope Emeritus Benedict XVI was an outstanding teacher and academic whose impressive intellectual ability, combined with clarity of expression, made of him one of the greatest theologians of our era. For all his intellectual abilities, he always ensured that the faith was not reduced to academic hair splitting; religion, he emphasised, is not a lofty concept or an ethical ideal; it is rather, an encounter with a person, Jesus Christ. His personal writings on Jesus of Nazareth bear witness to his life’s work to share the Good News of salvation that comes through Christ. In many respects he was similar to the early Bishops and Doctors of the Church, combining great clarity of doctrine with pastoral realism.

“In 2011, declaring the opening of universal Year of Faith, Pope Benedict spoke about how, at baptism we enter the ‘door of faith’ and set out on a journey that lasts a lifetime. Now that his earthly journey has ended, I pray that, by the help of God’s mercy, the saints will go out to meet him and welcome him into his heavenly home. Ar dheis Dé go raibh a anam dílis.” He said: “During his visit to the United Kingdom in 2010, Pope Benedict used the occasion of his meeting with the Archbishop of Canterbury, Rowan Williams, to focus on the subject of ecumenism in the context of both greater secularism in wider society and the increasingly multi–faith pattern of belief. For those of us who were present on that occasion in Westminster Abbey, we were fortunate indeed to listen to two European intellectuals and people of deep faith in conversation about the future of European Christianity. It was an unforgettable and encouraging experience.

“On that occasion, His Holiness Pope Benedict also reflected on the work of the Anglican–Roman Catholic International Commission saying: ‘Let us entrust the fruits of that work to the Lord of the harvest, confident that he will bless our friendship with further significant growth’.

“We owe a common debt to him, not least as a Biblical scholar and the unique richness of his exploration of the person of Jesus.

“In the encyclicals Deus caritas est (God is Love), Spe salvi (In Hope We Were Saved) and Caritas in veritate (Charity in Truth), Pope Benedict examined the themes of God’s love, hope and redemption, and the need for an ethical perspective to achieve the common good in global development. As we look around today’s world, these reflections are perhaps more pertinent than ever, filled with a sense of prescience and still calling for response.

“Pope Benedict was manifestly a man of deep spiritual insight combined with a capacity for focused and articulate theological expression. During his life, he combined the role of churchman and theologian with energy, leaving as a legacy a substantive body of published work that stands testament to a Christian scholar of great intelligence and learning.

“His loss will be felt very keenly throughout the Catholic world and my prayers in the coming weeks will be for all who are bereaved and diminished by the passing of a great man and a humble disciple of our common Lord, especially my brothers and sisters in Christ on the island of Ireland.