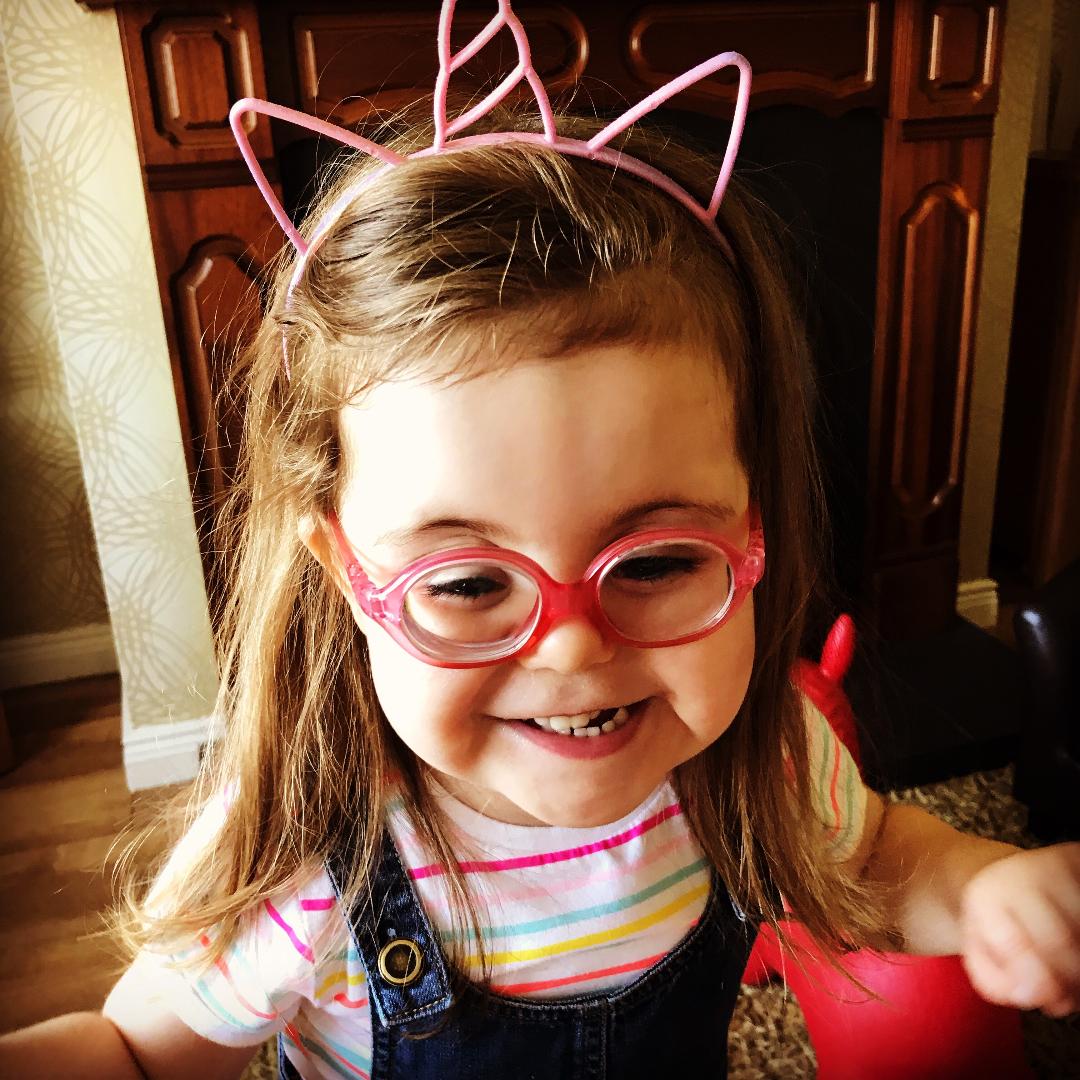 Inset, Ursula is excited about Christmas this year and is looking forward to spending her holidays with mum and dad Connie and Damian

An audio letter from Santa has made Christmas magical for a four-year-old Armagh girl, who was so far undergone 26 operations after being diagnosed with a rare eye condition shortly after birth.

Little Ursula Daly has endured numerous procedures and has been on countless trips to Moorfields Eye Hospital in London.

But all she wants for Christmas is a pink guitar – and an audio letter from Santa Claus!

Mum Connie says her daughter Ursula is so excited for Christmas this year as it’s the first year she is properly aware of who Santa is and with the help of her auntie Clodagh, she sent off her letter to Santa via sight loss charity RNIB.

Santa receives millions of letters from children each year and works hard to respond to every single one – but he knows that often children with vision impairment are not able to read his reply.

Ursula is excited as she knows that Santa has teamed up with the Royal National Institute of Blind People (RNIB) to make sure his letters are available in formats like braille, audio and large print.

Mum Connie said: “RNIB NI have always been a real support to us. Their children’s team are always on the other end of the phone and we really enjoyed going on a residential trip with them as well as parent workshops.. 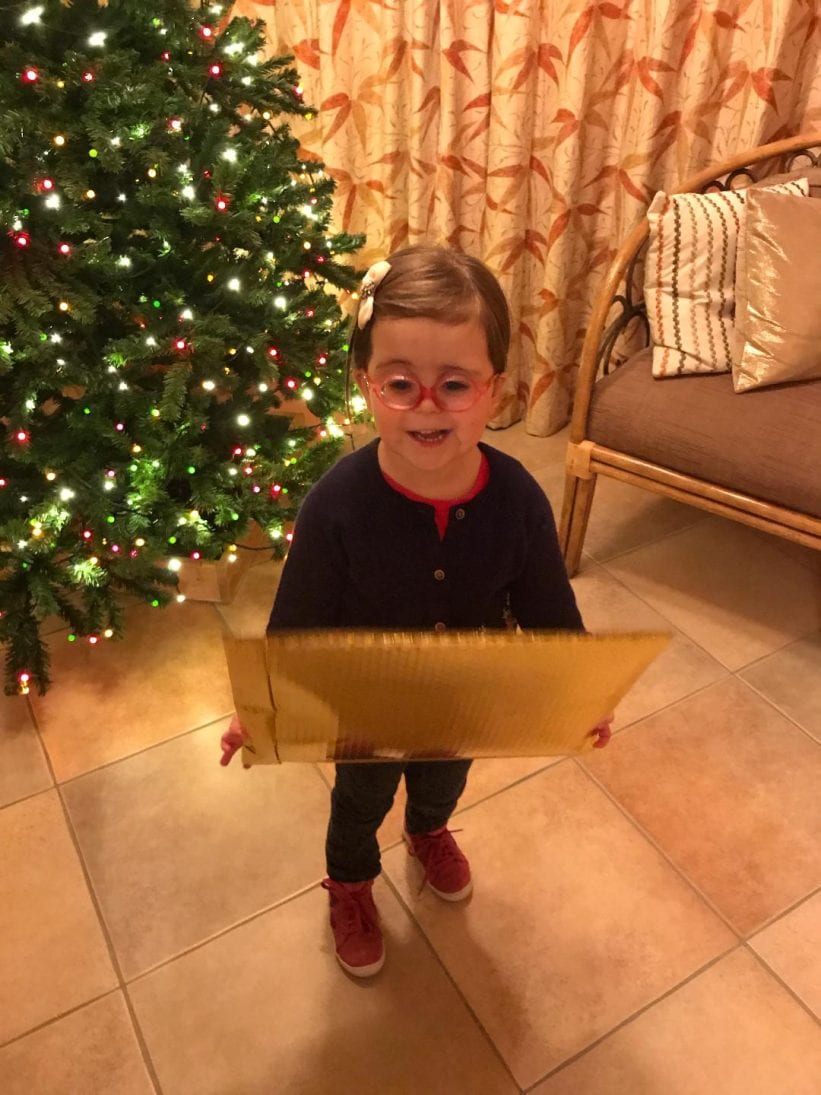 “It’s really helpful to chat to other parents and know that support is out there.”

When Connie and Damian Daly welcomed Ursula into the world, they were delighted, but Connie said she knew something wasn’t quite right with her baby daughter’s vision.

“When she was diagnosed with Congenital Glaucoma at just eight months old, it came as such a shock to us; it was all very daunting and overwhelming as it’s a very rare condition,” said mum Connie.

“Although it is usually a hereditary condition, it was unknown to us as a family. We had a lot to come to terms within a short space of time. Ursula was incredible, right from the beginning.

“She had her very first surgery at just ten months old and she was amazing. She’s so good at wearing her glasses, even when she was a little baby.”

Three years later, and Ursula has had a further 25 surgeries on her eyes both in Belfast Royal Victoria Hospital and at Moorfields Eye Hospital in London.

Connie said: “She has coped brilliantly, not only with the travelling, medication and operations, but with the numerous eye drops she has to get constantly throughout the day.

She said: “It was the day of her first birthday and she had a glaucoma implant put in five weeks previously, but she took a really bad infection. She was rushed straight to the Royal Victoria for emergency surgery and there was a 50/50 chance of losing the eye. thankfully, it went OK.

“Her shared care between her consultant Ms McLoone and her team at the Royal Victoria, along with the care at Moorfields under Professor Khan has been exemplary.”

Ursula still has some useful vision, but she is very short sighted and her peripheral vision has been affected. She wears tinted glasses as she is extremely sensitive to light, but manages everything well. 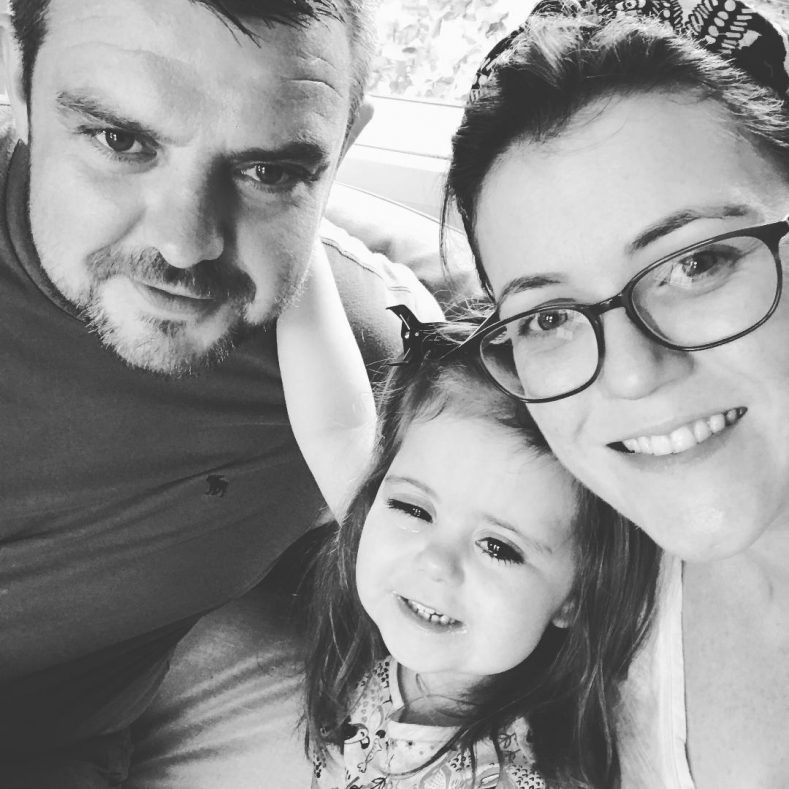 Mum Connie also says proudly that Ursula has started a pre-school she loves which has given her confidence a real boost.

The school itself, an Irish language pre-school called Naiscoil na Caille, has been incredible according to mum.

“Honestly, they were just so on board with everything, right from the beginning. They had training on Congenital Glaucoma from the Sensory Disability Team here in Armagh and I trained them all on how to administer Ursula’s eye drops,” she explained.

“They are so proactive in her care of her, yet they treat her like all the other pupils. They appreciate that with a few simple adjustments, Ursula can thrive. I know she’s in good hands when I’m not there. We’re so grateful to them.”

Connie and Damian have a great support network, not just from both families but also from Connie’s employers.

“My employers have been so supportive, right from the start. They worked around me and reduced my hours and offered me flexible working times. I felt so supported and was delighted to receive a promotion recently. When we got Ursula’s diagnosis, I thought I would have to give up work, but this shows that parents can do this.

“Ursula is very calm, caring, loving, totally courageous and nothing phases her,” said Connie. “She bravely goes through every surgery, has always been so good and never complains.

“She loves dolls and playing with her kitchen and even gives her dolls eye drops and checks their eye pressure, something I managed to catch on video which her consultants just loved.