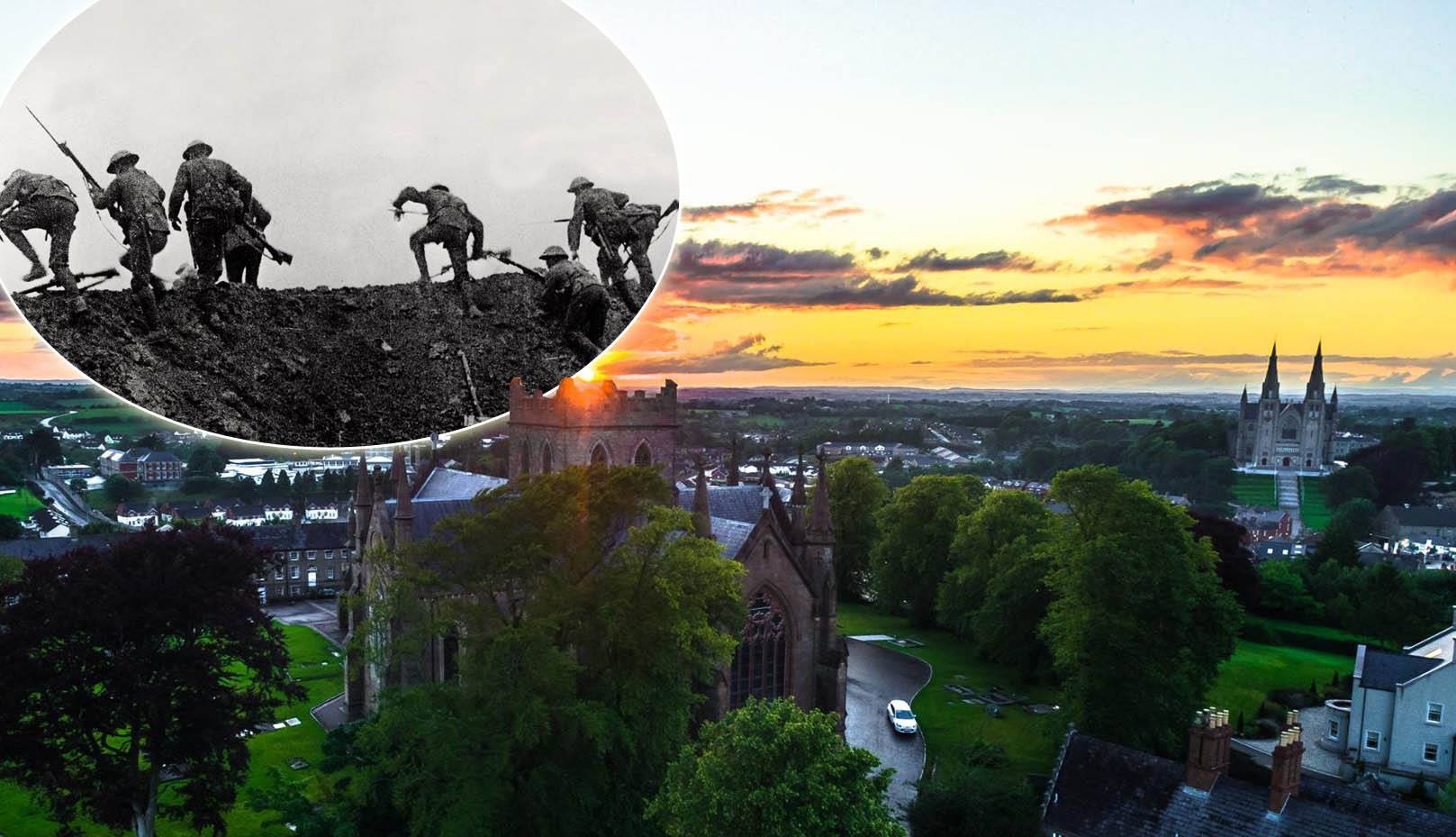 The bells of Armagh’s two Cathedrals will ring out tomorrow morning in memory of the Fallen at the Somme.

Both the Church of Ireland and Roman Catholic Primates have backed a national appeal to mark the centenary of the start of the Battle of the Somme.

Archbishop Richard Clarke and Archbishop Eamon Martin just last week returned from leading a cross-community pilgrimage to the battlefields of the Somme.

Tomorrow (Friday), at 7.30am, it will be exactly 100 years to the minute since the order was given to leave the safety of the trenches and advance into No Man’s Land.

Men, some even having enlisted as boys, fought in the Battle of the Somme, and were scythed down as they went ‘over the top’.

The Battle did not end until November and the loss was incalculable.

Tomorrow morning, Armagh’s two St Patrick’s Cathedrals will honour their memory as part of an initiative being organised by the Royal British Legion in Ireland.

‘A Peal for the Somme’ will be observed at churches and cathedrals, of all denominations, in all four Provinces.

All have been invited to take part by tolling a funeral bell, and both Cathedrals in Armagh have indicated they will do so.

St Patrick’s Church of Ireland Cathedral confirmed to Armagh I that its bells will toll at 7.30am, lasting for a full 10 minutes.

And then, at 11am, St Patrick’s RC Cathedral will toll its bells for a further 10 minutes.

This will coincide with the start of the international ceremonial event at the Thiepval Memorial in France.

This is not the first time both churches have come together to mark centenaries surrounding the First World War.

Almost two years ago, in August 2014, then Primate, Cardinal Sean Brady, and the Very Rev Gregory Dunstan, Dean of Armagh, officiated at a service on the Mall in Armagh, when three Irish yew trees were planted in the area behind the Cenotaph as a memorial to the 10th and 16th (Irish) Divisions and the 36th (Ulster) Division.

The gesture was to mark the centenary of the outbreak of the Great War.

The Royal Irish Fusiliers were drawn from Armagh, Monaghan and Cavan; the Royal Irish Rifles, from Belfast, Down, Antrim and Tyrone; and the Inniskilling Fusiliers from around Omagh, Enniskillen, Derry and Donegal.

The Royal Irish Regiment numbers came mostly from Tipperary, Wexford, Waterford and Kilkenny, with the Royal Munster Fusiliers from Cork, Kerry, Limerick and Clare. The men who numbered the Connaught Rangers were drawn mainly from Galway, Sligo, Roscommon, Leitrim and Mayo, the Leinster Regiment from Offaly, Meath, Laois and Louth, and the Royal Dublin Fusiliers from Dublin, Kildare, Carlow and Wicklow.

The Irish Guards were drawn from all four Provinces.

The huge loss at the Somme is also being observed in special services and events across the borough tomorrow and with the dedication of seats in memory of the Fallen.

The Royal British Legion’s Head of Remembrance, The Right Reverend Nigel McCulloch KCVO, said: “This year we are asking communities to host or take part in events to commemorate those who fell at the Battle of the Somme, which has come to symbolise the tragic scale and futility of modern industrialised warfare.”

The President of the Royal British Legion in the Republic of Ireland,  Major General David O’Morchoe CB CBE, endorses this view, adding: “The sacrifice of these young men, and that of so many communities across this island, is as relevant today as ever but in this centenary year we pay special tribute to their service and their sacrifice.”

The Battle of the Somme took place from July 1 until November 18, 1916 and has come to symbolise the enormous losses and dreadful conditions of the First World War.

Almost every community across the 32 counties of Ireland was deeply affected by the loss of men who had gone to fight at the Somme, especially those areas which saw heavy losses from the ‘Pals’ battalions, which were groups of friends, teammates in sports clubs and colleagues, who had joined together, fought together and often died together.

Lt Col Ken Martin, Chairman of the Royal British Legion in the Republic, said: “The ‘Peal for the Somme’ is intended as a community event to promote remembrance of those of all nations who made the ultimate sacrifice. It is also an important opportunity for an inclusive reflection on the cost of war and the price of peace, and for Ireland to show solidarity with other nations in acknowledging our common losses.”