With approval granted to convert it into 19 stylish apartments, it is now being marketed for sale as a 'development/refurbishment opportunity' 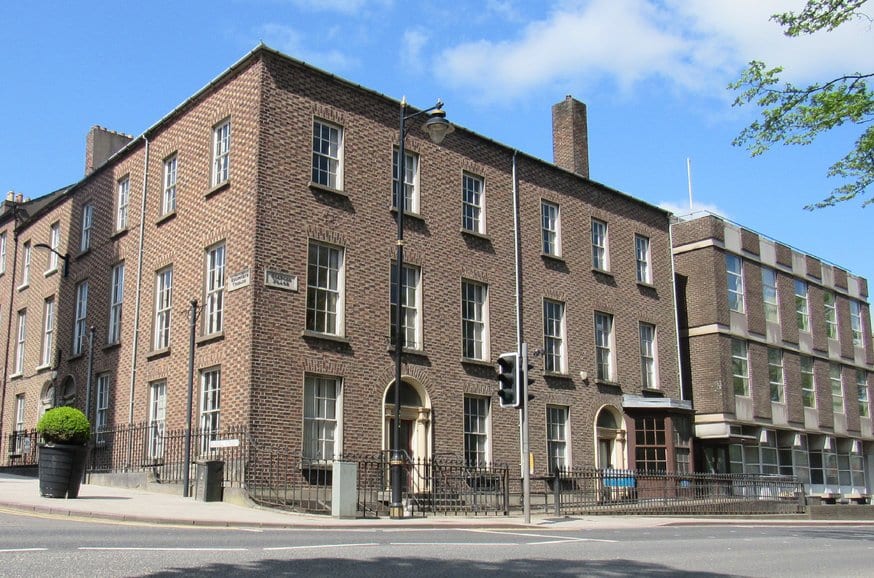 Main image: Gosford Place, and inset pictures showing the front as it is now and impressions for the new-look building containing 19 apartments which were given planning approval last year.

Armagh’s iconic Gosford Place on the Mall has been placed on the market – a year after planning approval was given to convert it into apartments.

The site, on the corner of Mall West and Russell Street, is being marketed by Lisney.

It has, over recent years, had a number of planning proposals brought forward.

The most recent, which it had been hoped would see the expansive building brought back into productive use, was given the nod to proceed by Armagh City, Banbridge and Craigavon Borough Council last spring.

The development was to have included a total of 19 stylish apartments with parking to the rear – for 23 vehicles – and required three separate applications to be submitted. Part of the scheme related to Russell Street and the proposals – as well as requiring full approval – also necessitated Listed Building Consent and ‘DCA’, which is for a demolition within a Conservation Area.

The proposals referred to property at 22 Russell Street and numbers 1 and 2 Gosford Place, and also involved work being conducted to the rear of the Mall Presbyterian Church.

The applications had been drawn up by drawn up by Tregaron Properties Ltd and lodged in November 2020.

Now the building – a former Health Trust HQ – is back on the market for sale. This time it comes up for sale with the added bonus of planning approval for the 19 apartments with, according to the marketing materials, the “potential for an additional unit, subject to formal approval”.

No price is being given at this stage, with details available on application to serious potential buyers.

It is being marketed as a “development/refurbishment opportunity”.

According to Lisney, there is also “potential for further ‘mews’ residential/commercial development on adjacent lands, subject to formal approvals”.

The main block offers around 22,000 sq ft of floorspace, and approval has already been given for grant assistance to support the refurbishment of the ‘Listed’ block of the building.”

Lisney, in marketing the property, advises: “Within this common space to the rear and included in the sale is a range of dilapidated commercial buildings, currently in storage use, and a plot used as a parking area. Subject to formal approval, once cleared this plot provides an opportunity for ‘mews’ style residential/commercial redevelopment.

“The entire main block has been stripped of all previous office sub divisions and is now ready for refurbishment. The upper floors are served by a lift and there is currently a roof garden area with panoramic views over ‘The Mall’ and beyond.” The building underwent major refurbishment and repair works after sustaining serious damage in an IRA bomb attack on the Armagh Courthouse in September 1993.

It did reopen and was utilised by the health authorities but they later left and the offices were put on the market for sale.

Now, back on the market once more, the agent is hoping that a buyer can be secured to bring about the changes which Gosford Place has long been in line for.