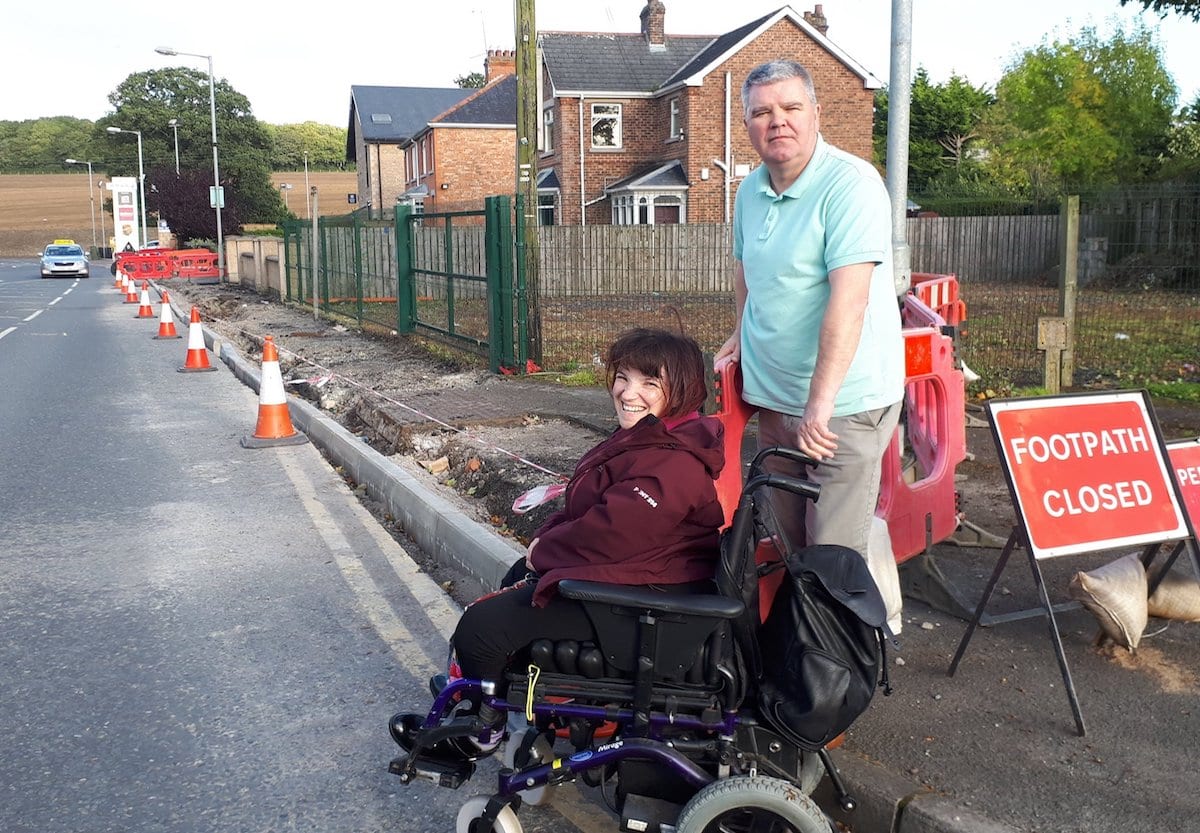 An Armagh wheelchair user has welcomed works which will improve accessibility in the west of the city.

City woman Laura Fagan says the installation of a pedestrian crossing and a section of the footpath widened will make her life a lot easier in the area.

Laura has been a strong force behind the works says the need for these are long overdue.

“It was always such a hassle trying to get into town; no crossing at the Monaghan Road meant longer journeys and having use two separate island crossings on the Keady Road, which are simply too small to cater for wheelchairs or prams,” she said.

“A lot of the time I have had to go on the road as drivers have parked their cars on the footpath, not caring to leave enough room to get by.

“I got in touch with my local MLA Cathal Boylan for assistance and he has been instrumental in getting these works done.

“I’m over the moon the path has been widened and the pedestrian crossing will be put in place. The difference this will make is massive.”

The crossing, which is currently being built near Cregagh Gardens along the Monaghan Road, will greatly improve safety in the area, according to Newry Armagh Assembly Member Cathal Boylan.

“This is a very welcome development indeed,” said Mr Boylan.

“This is an extremely busy junction and residents have encountered difficulties crossing here for quite some time.

“The fact that there are a number of housing estates in the area not only adds to the volume of traffic but also means that road users have been at risk of getting knocked down,” he said.

“This is one of the busiest road junctions on the outskirts of the city particularly at peak times of the day and it was clear something needed to done there so that residents could cross the road in safety,” he said.

“As part of the campaign we requested a meeting on site with Transport NI and then Department of Infrastructure Minister Chris Hazzard which set the ball in motion, however credit must be given to Laura Fagan, who has been campaigning hard to make Armagh more wheelchair friendly.

“Laura has led the way in highlighting the difficulties that are presented to wheelchair users in Armagh, including the width of pathways, motorist’s consideration when parking their vehicles, and the lack of a safe road crossing along the Monaghan Road.”

The MLA also said that motorists had a role to play in improving road safety.

“It’s clear many drivers are not respecting that the road is not just for them,” he added.

“I would appeal to drivers to think of other road users when parking and to slow their speed at busy junctions.”