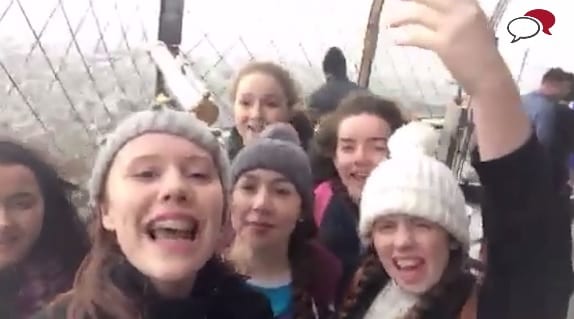 A group of Armagh students had tourists from around the world intrigued as they belted out ‘The Boys of County Armagh’ atop the Eiffel Tower in Paris.

The schoolgirls from St Catherine’s College in Armagh, currently taking part in a French exchange trip, sang the song as tourists took pictures and videos.

Taken at the very top of the world-famous landmark in the French capital, the girls wanted to do something original on what was the college’s 23rd consecutive annual trip to France.

Speaking to Armagh I, Patrice said: “Myself and Aine thought it would be a great original idea to sing this fantastic song at the top of the Eiffel Tower.

“Other tourists videoed us when we we’re singing, that’s why some of us waved in the video, I think we’re probably the first ever to do this?”

The group are being accompanied by teachers Mrs Kirkpatrick and Mrs McMahon.