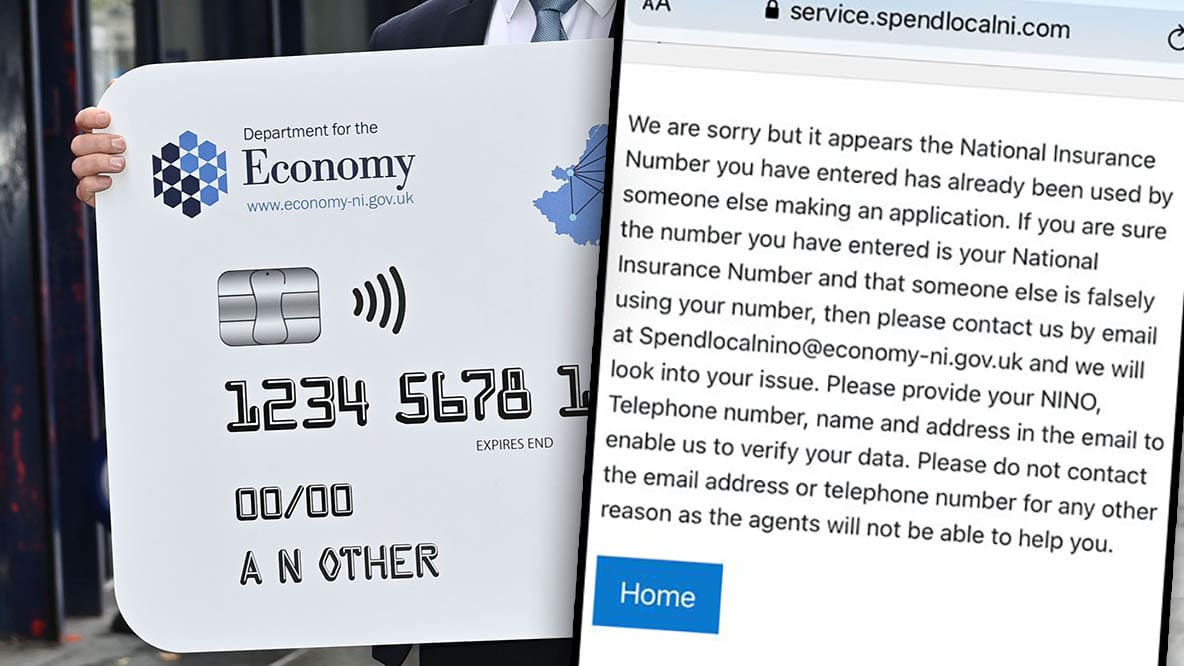 An Armagh man has described the handling of the High Street Voucher scheme as a “monumental b*lls-up” after being told his National Insurance number had already been used when he tried to apply.

And now into the second week with no response from the Department of Economy – which is responsible for the Spend Local initiative – he has questioned the systems in place for administering the cash.

On Monday, the Department said the first 100,000 cards were ready to be issued – one week after the application process opened.

But the Department has since admitted that around 1,000 people had not been able to complete the application process due to their National Insurance number having been used by someone else.

The man says he is angry that a “more robust” application process has not been put in place.

And he claims that those who are responsible for overseeing it should act to ensure those being “discriminated against through others’ stupidity or criminality” will receive their cash.

The man, who did not wish to be named, told Armagh I : “It’s an absolute mess and the Department of Economy is basically saying ‘don’t contact us, we are aware of the issue’. And yet they are giving no reassurances that the matter will be sorted.

“People were able to apply from Monday of last week but my wife and I left it until Wednesday as we knew there’d be a rush of people trying to get through. The system did actually crash so it was obviously not prepared for the demand.

“On the Wednesday, we got the link to submit details. My wife’s went through. She got an automated response to thank her for the application. It said: ‘We will now be carrying out some checks to confirm you are eligible to receive the pre-paid card. This could take some time as up to 1.4 million people have to be checked but don’t worry we will be in contact once we have completed the check on your application. In the interim, please do not contact the Department for the Economy, NI Direct or the card provider as we will be unable to tell you whether your application has been approved as checking is an automated process’.

“That was fair enough. Movement. But then I went to apply and was told someone else had beaten me to it.

“The response I got said: ‘We are sorry but it appears the National Insurance number you have entered has already been used by someone else making an application. If you are sure the number you have entered is your National Insurance number and that someone else is falsely using your number, then please contact us by email at Spendlocalnino@economy-ni.gov.uk and we will look into your issue. Please provide your NINO, telephone number, name and address in the email to enable us to verify your data. Please do not contact the email address or telephone number for any other reason as the agents will not be able to help you’.

“I did exactly what was asked and got an automated response saying: ‘We will investigate your issue and be in touch in due course’.

“That was eight days ago and there has been nothing further and judging by radio debate on the topic the Department is not giving any guarantees it will be resolved.

“Surely if you have to use your National Insurance number it is unique and must tally with your name and address. Are the Department even checking?

“They seem to be blaming people for typing in the number wrong. I tried three times. I checked my National Insurance number on my P60 and each time I got the same response. It’s my number but someone else has used it.

“I would have imagined this would have been a high priority when this happens. This could be a case of someone else wrongly typing in their number and using mine instead. If that’s the case it should – if the process were being managed properly – be easy to rectify. Surely they can type that number into their systems and see the name and address of the person who has used it and follow up on that. If it’s a genuine mistake then correct it.

“If it’s not a genuine mistake then there’s something much worse happening in terms of widespread fraud.

“I would think in either case scenario the Department would have been following this up as a matter of urgency and keeping those who stand to lose out informed. If it’s a criminal enterprise at work then it needs investigated by the proper authorities and the PSNI notified.

“Considering the response to my wife’s application which says checking is an automated process it does not inspire me with confidence that anything will be done.

“The Department for the Economy needs to make a public statement on the matter.

“Are those of us who have been affected just going to lose out? Are our £100 cards already in the post and making their way to the wrong addresses, where perhaps someone is receiving multiple cards?

“This is an equality and discrimination issue too. We have the right to be treated in the same way and receive this same incentive as anyone else and should not be discriminated against through others’ stupidity or criminality. If someone else has made a mistake or acted fraudulently it is not right that others should be penalised.”

The man has challenged local MLAs to ask questions and “inform the people they represent”.

He has also asked that the Department for the Economy respond to those who have flagged the issue and “take their concerns seriously”.

He added: “I like many have worked throughout the whole pandemic. I did not receive any money as a result of furlough or no public sector rewards. Those who did receive that were fully entitled and furlough, I’m completely aware, was necessary to ensure the survival of businesses and try and protect jobs. I’ve no issue with that whatsoever.

“What I have got an issue with is that when, finally, it looks as though there might be a ‘perk’ or some reward – even in the form of this token voucher – I and others could stand to get nothing through no fault of our own.

“I have been working for almost 40 years and my tax and National Insurance contributions have been going out every week. There has never been a mistake when it comes to Government getting its hands of my hard-earned money. But the first time you look like getting something back and this happens. It’s nothing short of a monumental b*lls-up.

“I would be interested to hear when – or even if – the Department for the Economy will fix this problem. Questions need to be asked and answers given now.”

The Department for the Economy, meanwhile, has said it is putting in place a process to allow those affected to “move forward”.

And it insists that there is no suggestion that the situation came about as a result of any illegal activity.

A spokesperson told Armagh I : “There is no indication of fraudulent activity and no application will be approved until the applicant’s data has been verified, including checks against multiple applications. There is no fraud so there is no requirement to report cases to the PSNI.

“To date around 1,000 members of the public (0.1% of applications) have contacted the Department to report that their National Insurance Number (NINO) has already been used and that they are unable to make an application.

“The Department has implemented a process to ensure that those prevented from applying because their NINO has been used can now move forward with their application.

“Each case reported to the Department will be thoroughly investigated and the data verified to ensure only those eligible receive their Spend Local card. The Department will be in contact as soon as possible once this process is completed to allow the application to proceed.

“The application window remains open until 25 October, and providing applicants provide the Department with the right information, everyone affected by this issue will be able to apply and receive their card.

“If someone thinks they have an issue with their NINO they should double-check they are using the right NINO and, if still having access issues, contact spendlocalNINO@economy-ni.gov.uk.”