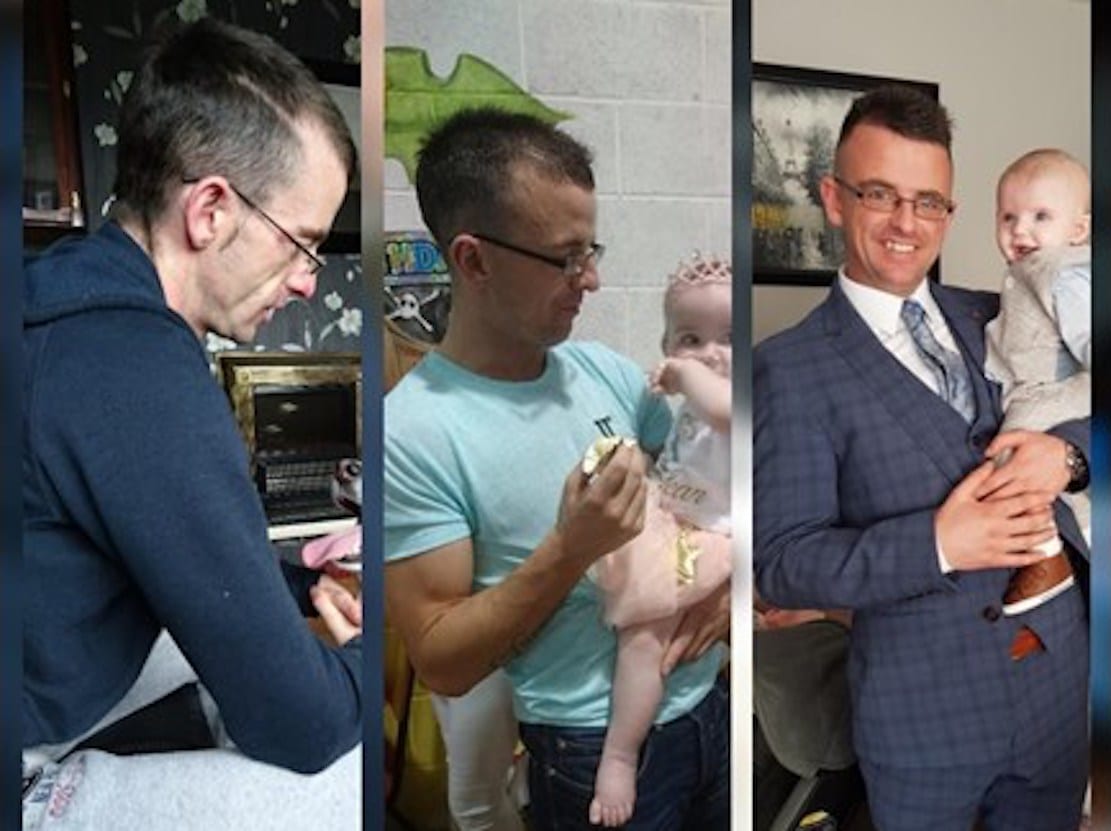 An Armagh man who attempted to take his own life when addiction and mental health problems took over is preparing for an adrenaline-fuelled skydive to raise money for charity.

Conor Crilly, who will take the leap of faith from 10,000 feet on his 33rd birthday, speaking to Armagh I, joked: “I might not see my next one”.

To speak to the father of two you would never have guessed the problems he has overcome and the transformation he has made in his life.

He says the turning point for him was when his partner walked in on a botched suicide bid.

Conor stated: “Twenty months ago I was suicidal; my partner found me in the attic, where I had tied a rope around my neck but luckily it had come loose and instead of killing me, had choked me out and I was left unconscious.

“That was the final straw for me; that was cocaine and alcohol addiction,” he said.

His partner would ring Lifeline, who advised her to take Conor to A&E straight away.

The Armagh man would then be taken to the Bluestone Unit at Craigavon Area Hospital for a nine-day stretch before an shorter than intended stay at Sister Consilios – a rehabilitation centre – in Newry.

“I was at Sister Concilio’s for two weeks, but I couldn’t stick it, I had a wee 10-month-old baby at the time and I was missing her like mad,” Conor recalled.

Adding: “My family were nervous, they thought I would be back on it, but I knew in my own head and I haven’t looked back since.”

Conor struggled with alcohol addiction from a very young age before his later years the addiction to the harder vices kicked in.

Recanting his story Conor said he started drinking when he was 10 but wasn’t caught for about two years.

“I knew I had a problem but that’s what led to my mental health problems, the drugs and alcohol abuse,” he stated.

However, Conor says two major events in his life acted as triggers for him.

The first was the death of his father.

“I lost my father at 14 to motor neurone disease, I watched him rot away, fade away to nothing,” he recalls. “I sort of went off the rails after that, putting my ma’s head in over the years”.

The second, Conor says, happened when he was in his mid-20’s while travelling and working in Australia.

“I was stabbed seven times with a butcher knife and I was very, very lucky to survive.

“I was in a wheelchair for a month and bed bound in intensive care for three and a half weeks, meaning I couldn’t come home.

“Every time I closed my eyes I could see him standing over me with a knife; I kept having these recurring nightmares.”

At his lowest point, Conor weighed just nine stone; nothing mattered to him – in his mind the only way out was by ending it all.

“I was depressed, I wasn’t eating,” he said. “I was feeding myself with drink and drugs just to try and cure it.

“Even with the 10-month-old baby, I didn’t want to live, I just wanted to die, it’s like tunnel vision where nothing else matters.”

But times change, people change, and only for a deeper sense of self-worth, hidden in the recesses of Conor’s mind, he wouldn’t be where he is today.

At 32, Conor is the owner of his own business – a car dealership – and now the proud father of two children, with his partner giving birth to a son just seven months ago.

“People would have crossed the street if they seen me coming drunk up the town, now they will stop and talk to me,” he admits.

Conor says he now tries to help others who are suffering from similar problems and makes it his mission to speak up about mental health issues any chance he is given.

“It’s not so much about the fundraising, I do want to give something back, but it is good to get that message out there and encourage people to talk about their problems.

“I have turned my life around because I admitted my problems and sought help, I just want to encourage others to take solace from my story.”

If you would like to donate to Conor’s skydive you can visit his just giving page here.

If you’ve got a personal story you’d like to tell, please get in touch via email at info@armaghi.com. We also respect your request for anonymity.