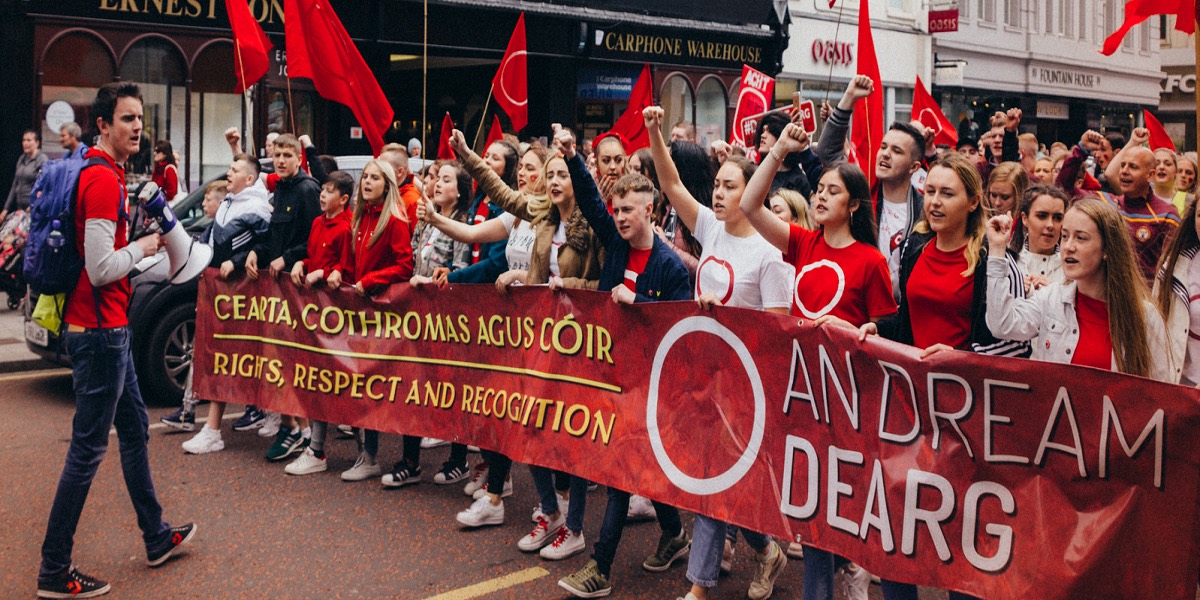 Cairde Teoranta, Armagh’s foremost Irish language and community development cooperative, has announced that they will be arranging coach transport from Armagh City and Lurgan to Cultúrlann McAdam Ó Fiaich in Belfast on Saturday, May 21.

Irish language campaigning network, An Dream Dearg, has planned a huge march and public rally to Belfast’s City Hall – to give voice to the widespread community demand for an Irish Language Act in the north.

The local Irish language community and their supporters are requested to gather at Cultúrlann Aonach Mhacha in the Shambles area of the City for 11am on Saturday morning where a ‘Dearg le Fearg’ themed bricfeasta will prepare campaigners before departure to Belfast at 11.45am.

Families are especially welcome! While the bus will be free of charge, a solidarity donation of £5 is requested in order to cover breakfasts.

Thousands of Irish language activists are expected to descend on Cultúrlann McAdam Ó Fiaich in West Belfast’s Gaeltacht Quarter at 1pm on route to the large public gathering at City Hall at 2pm.

The crowd will deliver a loud message to the authorities that language rights are human rights and that a new generation of Irish speakers will not accept second class citizenship from Stormont or London.

Despite numerous promises to the Irish language community by Stormont Executive parties and the British Government, including renewed pledges under the ‘New Decade New Approach’ agreement that brought the Stormont parties back into office, Irish speakers and their families continue to be denied legislative protection for their rights, first promised under the Good Friday Agreement in 1998.

Campaigners are angry that they have been forced to return to the streets again in their thousands to demand rights and entitlements that are enjoyed by speakers of native languages in Wales and Scotland, but continue to be denied to Irish speakers in the six counties.

Armagh native and representative of An Dream Dearg, Bláithín Mhic Cana, said: “As a parent who is raising my family as Irish speakers, all I ask is that the state recognises Irish as our language of choice – to live my life through the medium of Irish.

“An Ghaeilge is the language we speak together at home, from morning to night, but we can avail of very few public services from the state through Irish. The fact my children see very little visible official Irish in public places also reinforces the isolation and marginalisation of our community of speakers. This is further exacerbated when we are ignored or attacked by Government ministers and elected representatives.

“It angers me that my children and other children are at a disadvantage because of their language of choice.

“Our society is changing and more and more people are choosing to raise their children through Irish. The Irish medium education sector is flourishing.

“Despite the significant cultural and social changes that have taken place in recent decades, the system and the state in the north remains unchanged. The time for change is long overdue and the official acceptance that we can no longer be made to feel invisible or treated as second class citizens in our own country.”