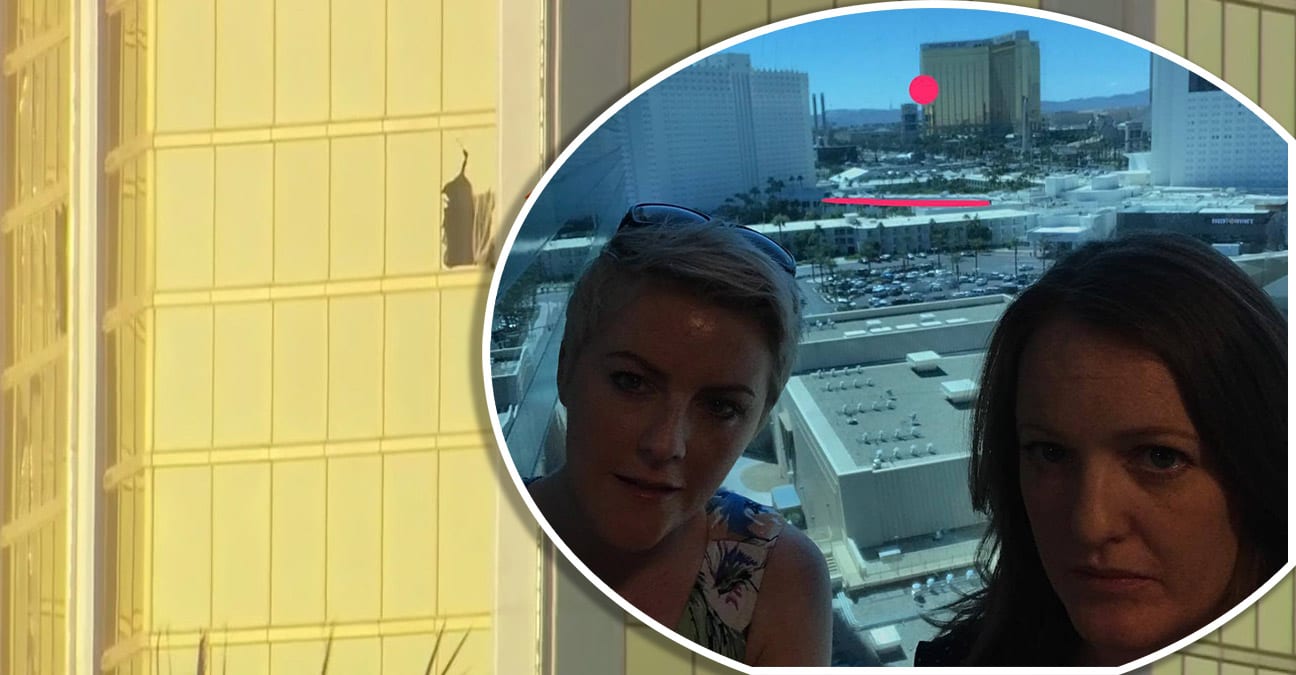 Sinead McGeown and Laura Livingstone are staying at the MGM Grand across from the venue where Sunday night’s concert had been taking place.

Laura has lived in San Francisco for the past 10 years; Sinead was visiting as part of a 10-day trip-of-a-lifetime for her birthday.

The girls had decided to take a two-day trip to Las Vegas to celebrate.

It was the final night of the Route 91 Harvest Music Festival, headlined by Jason Aldean.

Over 20,000 music fans were enjoying the concert when all hell broke loose.

Stephen Paddock opened fire from the 32nd floor of the Mandalay Bay Resort and Casino.

It was the biggest single mass shooting in US history and happened at around 10pm local time.

At least 58 have been confirmed dead and more than 500 were injured.

Police stormed the hotel room where Paddock had launched his murderous attack and found the 64-year-old dead.

Husband and wife, Stuart and Zara McCormick, from County Down, had been at the concert and ended up running for cover and hiding out in the parking lot of the MGM building.

Both Laura and Sinead – who are staying at the MGM – have since met Stuart and Zara, who have been able to change their flights and are planning to fly home today.

Laura told Armagh I of the utter disbelief in Las Vegas at what has happened, the scenes and accounts of carnage and the mood of the people as the dreadful reality of what has happened sinks in.

While they were not directly affected, from their room on the 18th floor of the MGM Grand they have shared with us pictures – taken from that same room – of the hotel vantage point adopted by Paddock.

The pictures clearly show the stage where the shooter opened fire so indiscriminately, where the thousands of innocent revellers stood, totally unaware of the terror and tragedy about to take place.

Laura and Sinead have contacted family and friends to let them know they are safe.

They are hoping to fly back to San Francisco later today, but as Laura explained, some flights have been delayed or cancelled.

The Las Vegas they are leaving behind is a far cry from when they arrived two days ago.

Laura told us: “The mood is somber, lots of people seem sad and perplexed.

“When we arrived on Saturday we met a few people from North Carolina and other states in the US who were attending the festival.

“We know they have kids and families and we have no idea if they are OK, or wounded and in the hospital or dead, and if their bodies still at the scene of the shooting.

“It’s a crime scene now and all the bodies are still down there.

“We didn’t hear or see the shooting. Like many we woke up to hear about it this morning and have been speaking to many people in the hotel today who were at the concert.

“They told us they thought the noise was fireworks or part of the show. Two guys who were in the VIP tent in the picture told us they only realised what was happening when someone dragged a girl who had been shot in the head past them and they tried to get out.

“The people we spoke to today have scrapes and wounds from falling so quickly to the ground and crawling to get out.”

Like the eyes of the watching world, they cannot fathon the mindset or the reasoning or the why behind this atrocity.

Laura added: “The American man who is responsible for this tragedy took his own life by the time the police reached him.

“He has no history of owning guns or terrorist-related activities.

“Just another crazy, senseless person who probably didn’t even need to undergo a background check before he was allowed to buy so many automatic weapons and ammunition.”