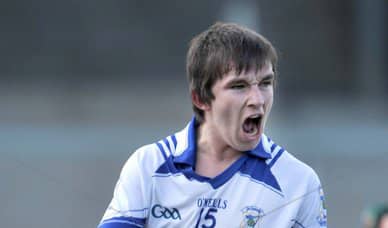 Armagh Harps came into this TMet Senior Football Championship semi-final as strong favourites but it was Ballymacnab who made the stronger start – with Brian McCone slotting over two early points.

After that short period of dominance from the ‘Nab Conor Coulter kicked his side into life with two fine points. A free kick from Gareth Swift then levelled things up.

Karol Loughran gave the Harps a 0-05 to 0-03 lead when he swung over two consecutive scores within two minutes. Loughran’s points were followed up by a goal from the young and exciting Ryan McShane.

Ballymacnab faced going in at half time trailing by a large deficit – but a goal from Gavin McParland followed by a Ryan Kennedy point narrowed the deficit to just three points at the interval.

Harps shrugged off the ‘Nab’s fine end to the first half with a strong response. Two early points for the favourites and a goal from Charlie Vernon on the 38th minute gave Harps a very health 11 point lead. Vernon fisted in after a great counter attack up the right from the Harps.

Ryan Kennedy got Ballymacnab’s first point of the second half, a slick one-two with Jack Grugan before striking a fine point with his left boot.

Charlie Vernon got a stunning score 43 minutes in – the county man cut in from the right, danced past a number of defenders before knocking the ball over. This made it 2-12 to 1-06 in Harps’ favour.

Ballymacnab didn’t fold though, changes were made to help energise the side with Gary McKee and Oisin McGivern coming into the game.

Things brightened for them up as points from Ryan Kennedy, Gavin McParland and substitute Oisin McGivern helped motivate the brave battlers.

Harps were still quite content with their lead and continued to get at the ‘Nab with their frightening pace but Gavin McParland set up an exciting finish to the game when he smashed in a goal from 20 yards to put four in it with three minutes of normal time remaining.

Harps held out strong, a lovely passing move was finished off by Conn Stevenson out on the left. Nippy Swift grabbed the final score in stoppage time. The game finished Armagh Harps 2-16 Ballymacnab 2-10.

Upsetting result for Ballymacnab, but Harps will be bouncing tonight. Neutrals will also be going home quite content because this has set up one interesting Senior Championship Final between Harps and Crossmaglen.