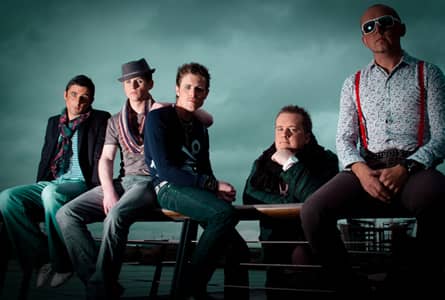 CRAIGAVON Borough Council has been shortlisted in a major Northern Ireland Tourist Board competition – and they need your votes to win!

A quirky video entry, shot by local media company BNL, showcases the borough’s tourist attractions and includes a number of local businesses who have lent their support to the project.

Portadown-based band Microlip (pictured) adapted the lyrics to their song ‘Moving On’ and re-recorded it for the video.

It is a close competition, with only one per cent of the vote splitting Craigavon Council from their main rivals – Derry Visitor and Convention Bureau – with the voting due to close at 5pm next Monday, March 25.

The competition is run by the Northern Ireland Tourist Board to win one of the famous ‘Cow Parade’ cows, ‘Mootiful’.

NITB invited attractions, hotels, tourism organisations and councils from across Northern Ireland to send them a video saying why ‘Mootiful’ should live at their property.

Craigavon Borough Council decided to enter to try and win one of the cows as part of the Portadown 400 celebrations, so it could visit each event and be a great attraction.

The top four videos have been placed on NITB’s website for the public vote and they are Derry Visitor and Convention Bureau, Craigavon Borough Council, Magherafelt District Council and The Navan Centre and Fort, just outside Armagh City.

The voting page – www.discovernorthernireland.com/voteformoo – is live and the public can go on and vote for their favourite and also share on their social media.

Said a Craigavon Council spokesperson: “Please like and ‘share’ as this is counted also. Even if you don’t have Adobe Flash player, you can still vote for Craigavon to win. Voting closes 5pm on Monday and the winner of NITB’s Big Moo will be announced on Tuesday, March 26.”