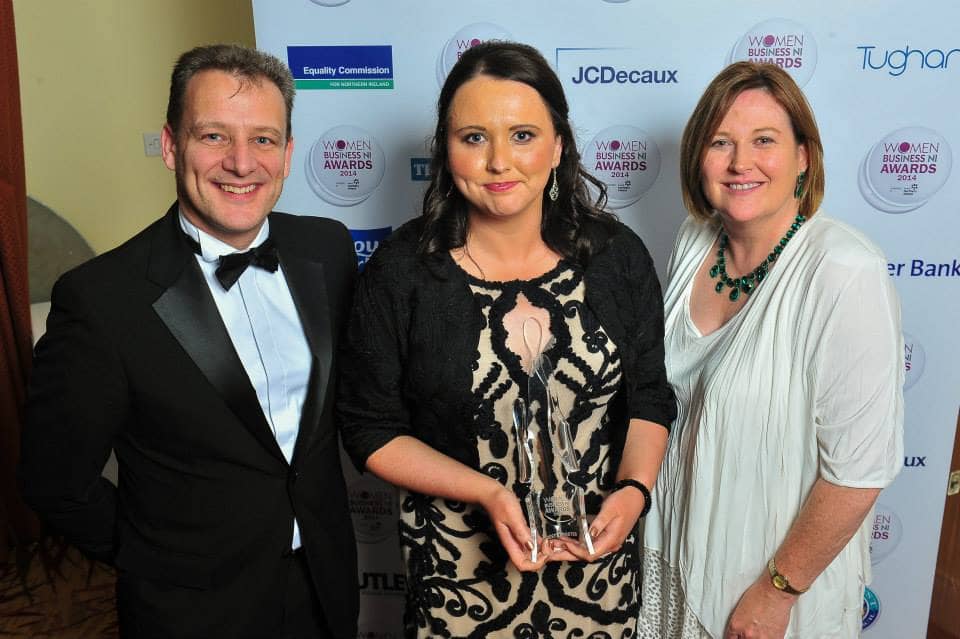 Local Business Woman and owner of The Rug House Clare Vallely has scooped a leading prize at the Women in Business Northern Ireland Awards.

The Awards were held in the Culloden Estate & Spa near Belfast last Thursday evening. 420 guests attended the event which highlighted the hard work and achievements of many business women who make a valuable contribution to the economic life of Northern Ireland.

Clare is a 27 year old graduate from Dublin Institute of Technology where she studied Surveying and Property Economics. Clare was inspired from a young age by watching and observing her father Kieran who was successful man at the Market stalls. Her own business career got underway at a challenging time as Clare decided to set up The Rug House with her brother Paul whilst she was attending University. The Vallely’s launched The Rug House as an online company based in Clady selling rugs on eBay, Amazon and the company website. It has been a unique journey, their first products would have been stock that would have failed to sell at other local stores but Clare and Paul used skills they developed in their upbringing to sell and promote in their own distinctive style.

When the company found itself to be in a strong and stable financial situation, Clare and Paul travelled to Belgium and bought their first container of clearance rugs for £28,000. This was a pivotal step for the company as they made a £70,000 profit within six months – after selling to satisfied customers.

In recent times The Rug House has been creating waves in the local economy opening a new retail outlet in Carnbane Industrial Estate, Newry.

The Autumn and Winter season has been very successful for company with increasing sales and multiple award wins. In September The Rug House won Exporter of the Year at the DANI Awards and this was followed by the Best SME Award at the UTV Business Eye Awards.

Over this period staffing level has increased from 22 to 25 staff with a number of key positions still to be filled including shop and purchasing manager roles.

Clare explained “I am delighted to be recognised but this award is recognition of all our staff and their hard work. This is the busiest period of the year for The Rug House with homeowners investing in new rugs in time for Christmas and our staff have shown amazing commitment and work ethic to deal with the increased workload.”