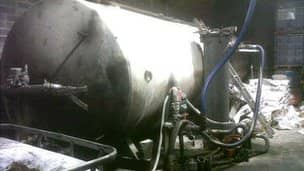 Nearly 80 tonnes of toxic waste have been removed from farm buildings the Cullyhanna area on Tuesday.

Customs said the illegal plant was capable of producing about 24m litres of illegal fuel and evading almost £15 million in lost duty and taxes every year.

The plant was dismantled and waste safely removed.

HM Customs’ Mike Parkinson said: “The volume of toxic waste we uncovered at this laundering plant is staggering and shows the total disregard that these criminals have for the environment.