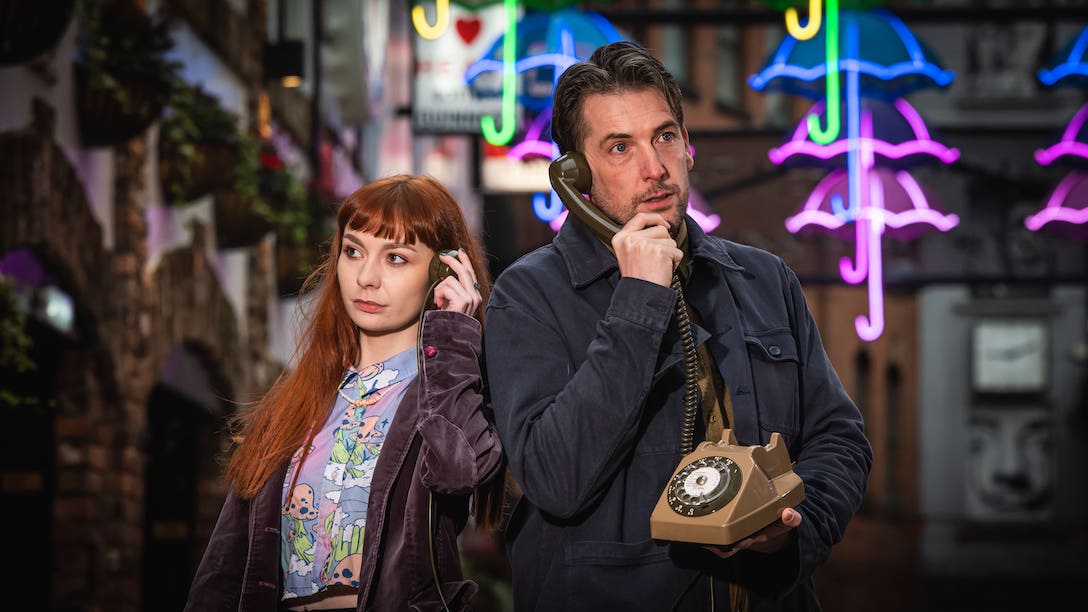 Callings a poignant new political play from Kabosh, following the lives of five gay/lesbian people who sought sanctuary and community through Cara-Friend – a phoneline and befriending service set up in 1974 to support our hidden LGBTQ+ communities, will premiere at the Lyric Theatre, Belfast 15-17 February 2022 followed by a regional tour 18-26 February 2022, during LGBTQ+ History Month (February).

The show comes to Armagh’s Market Place Theatre on this Friday, February 19 and we’ve got a pair of tickets up for grabs. Simply fill in your name and email in the form below to be in with a chance of winning. We will announce our winner on Wednesday.

Created by local playwright Dominic Montague, and directed by Paula McFetridge this compelling piece of queer theatre is grounded in research and conversations with Cara-Friend’s founders and early service users.  Callings tells their stories, of the countless isolated individuals who reached out and found support and strength, from a volunteer at the end of the phone.

Charged with the music of the day, Callings examines the LGBTQ+ experience in the north during the late 70s and early 80s , as queer people navigated the complexities of their social and political marginalisation.   Following the lives of Bridget (Vicky Allen), Helen (Paula Carson-Lewis), Martin (Chris Robinson), Jason (Christopher Grant), and Tommy (Simon Sweeney), Callings explores how these bright and resilient individuals found themselves and each other during oppressive times.

From rallying against the Save Ulster from Sodomy campaign to celebrating the right to exist won through the Dudgeon vs UK trial*, Callings looks at the historical challenges faced by local LGBTQ+ communities, and tells a series of powerful personal stories that will make you laugh, cry, and consider just how far we’ve come.

This project is funded by the Arts Council of Northern Ireland, Belfast City Council and the Garfield Weston Foundation; in association with Cara-Friend NI & Outcomers.

Paula McFetridge, Artistic Director of Kabosh said: “Kabosh is privileged to commission and produce this beautiful new play by Dominic Montague as part of LGBTQ+ History Month, February 2022.  The stories of our local LGBTQ+ communities are filled with fierce resilience, struggle, and political oppression, yet there is much humanity, kindness, and solidarity to be celebrated.  Callings gives us all the opportunity to re-examine our collective queer history, placing it loud and proud centre stage.”

Adam Murray, Community Development Manager, Cara-Friend said: “Cara-Friend is delighted to support our friends at Kabosh as they present the premiere of Callings.   This touching piece of theatre looks back to the 70s and 80s, the early days of Cara-Friend.  Back then, armed with just a phoneline and a make-shift office, our original team of dedicated volunteers changed the lives of gay and lesbian people across the country, night after night, one phone call at a time.  The Cara-Friend helpline, now Cara-Friend LGBTQI+ Switchboard, offers a listening ear to this day, and can be contacted on 0808 8000 390 Monday to Friday 8.30pm – 10.30pm or  visit https://cara-friend.org.uk/ ”