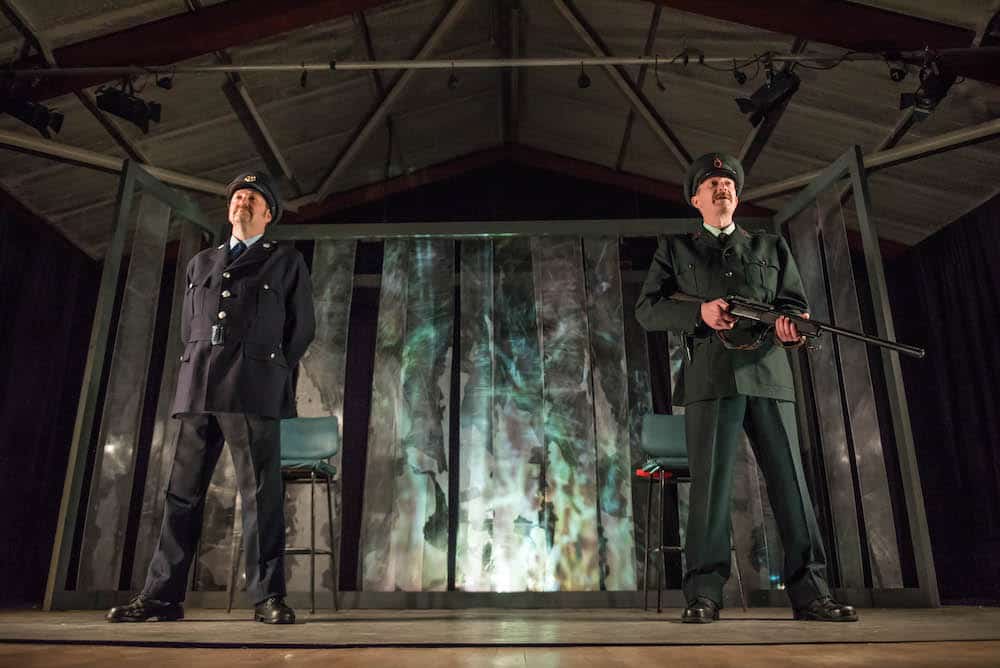 An award-winning play about a developing friendship between an RUC officer and a Garda officer on the border at the height of the Troubles will be performed in Armagh before becoming one of the star attractions at the annual Prague Fringe Festival this autumn.

Green and Blue, produced by Belfast theatre company Kabosh, will be staged at the Divadlo Inspirace Theatre located in the Liechtenstein Palace in the heart of the Czech capital from September 27-October 1, 2022.

It will be the first time Green and Blue has been shown since a highly successful residency at the Edinburgh Fringe in 2019 where it won the Lustrum Award for Best Theatrical Moment.

Paula McFetridge, Artistic Director of Kabosh said they were very excited to be invited to the prestigious Prague Fringe, which is now in its 20th year: “This is a great honour for us. We are delighted to be finally heading after a two-year delay! The play is very relevant at a time when borders in Ireland, Britain, Europe and further afield are such a hotly debated issue. This is a beautifully written play about what it means to be human in extraordinary circumstances.”

The play stars two of Northern Ireland’s finest actors, James Doran and Vincent Higgins, reprising their roles from the original production, which was premiered at Girdwood Community Hub as part of the 2016 Belfast International Arts Festival.

James Doran plays Garda officer Eddie O’Halloran, originally from West Cork, patrolling the Monaghan side of the border while Vincent Higgins is David McCabe, an RUC officer whose experience of patrolling the Fermanagh side is vastly different from his southern counterpart.

Set in 1994, just before the IRA ceasefire, the pair recount their experiences, taking in the history of the conflict in Ireland, how they joined their respective organisations and the day to day life of working in a disputed territory. The play is laced with humour, insight and lots of touching moments.

Despite their different backgrounds, Eddie and David strike up a common bond and begin to learn more about themselves, their similarities as well as their differences. David’s experiences are harrowing, steeped in violence and the threat of violence, while Eddie’s are much more ordinary except for his occasional run-ins with the local IRA commander.

But there is a brooding sense of what happens on one side of the border affects the other side. The two areas share a mutual dependence. With that air of comradeship felt by two people doing the same job, the pair decide to meet in a farmer’s field that straddles the border and find out that the ‘grass is no greener for sure’ on the other side of this invisible divide.

“Every line of the play is loaded, each scene redolent of the overall tragedy of Irish history and its wasted lives. These two ordinary men represent all of us and our place in a divided land. It allows us to glimpse the human beings behind the uniform. It eloquently explores the human cost of man-made borders’ Paula McFetridge said. It was inspired by Diversity Challenges’ ‘Voices from the Vault’: oral histories from former Royal Ulster Constabulary (RUC) and An Garda Síochána officers recalling their experiences as police officers during the Irish conflict.

Gilly Campbell, the Arts Council of Northern Ireland’s Director of Arts Development, said they were delighted to support the Northern Ireland regional tour of Kabosh’s powerful production of Green and Blue.

“It’s also incredibly exciting that Kabosh will be staging Green and Blue at the Prague Fringe Theatre Festival this autumn. It’s vital that our artists and arts organisations are given opportunities to showcase their work to audiences outside of Northern Ireland, helping to shine a light on the talent that is inherent to the region and putting Northern Ireland on the map for all the right reasons,” she added.

Green and Blue will be shown in the Lyric Theatre, September 14-18; Strule Arts Centre, Omagh September 19, the Ardhowen, Enniskillen September 20; the Market Place, Armagh on September 21 and the Old Church Centre, Cushendun on September 22. It will then go to the Divadlo Inspirace Theatre in Prague from September 27- October 1 2022.

There will be a post-production discussion at each of the regional venues and at the Lyric Theatre on September 17.

To book tickets, visit this link.