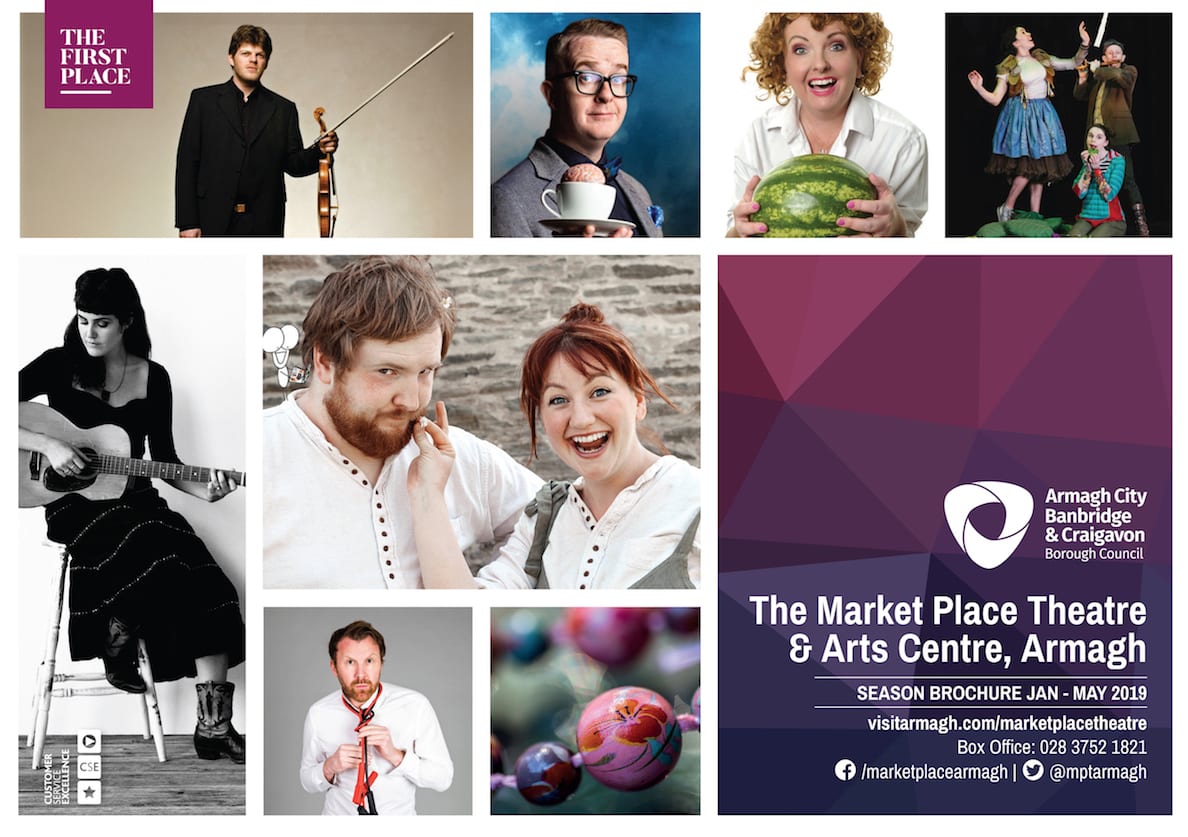 A new programme of events is now on sale for the Spring 2019 Season at Armagh’s Market Place Theatre.

Jam-packed full of drama, dance, comedy, music, kid’s show, workshops and exhibitions, there’s an endless choice of treats to keep audiences flocking to the ever-popular venue. Here’s just a glimpse at some of the entertainment on offer.

Music fans are in for quite a season, with a superb choice of the best in live music experiences.

You can rock the night away on 2 February with the all-star cast of ‘Rock ‘n’ Roll Years & Dancehall Days’, a whirlwind journey through the music of the ’50’s and ‘60’s.

The simply amazing Ulster Orchestra return on 21 February to demonstrate the power and effect of live orchestral music, a very special opportunity to catch a symphony orchestra in the intimate surroundings of your local arts theatre.

Star of Liberty X, Kevin Simm, will perform as Frankie Valli, in the must-see hit show, ‘My Eyes Adored You’ in March – a rollercoaster ride featuring hits like ‘O What A Night’, ‘Can’t Take My Eyes Off You’, and many more.

Lovers of Rock will be delighted when ‘Classic Rock USA’ takes to the stage on 11 April. This is a heart-pumping, drum-beating, pulsating rock extravaganza featuring over 25 hits from Bryan Adams, Jon Bon Jovi and Bruce Springsteen.

As ever, The Market Place will be alive with the sound of laughter, as the best local comedians take to the stage in Spring 2019.

‘The Outright King Of Comedy’, Jason Byrne, is one of the most exciting live comedy performers in the world, and he recommends the audience bring spare pants to his show on 15 March.

Northern Ireland’s very own Colin Murphy, will be back in March with his brand new show ‘Big Time’, an irreverent look at life in our little country.

Audiences can expect the unexpected, as nobody knows what will happen when Conal Gallen brings ‘Back To Front’ to the stage this Spring. One thing you can be sure of though, is to be in fits of laughter from the very start to the very end.

Top drama on offer includes ‘Ruby’ on 21 February, which tells the darker story behind the singing star, Ruby Murray from Belfast.

This powerful drama is accompanied by a soundtrack of original Ruby Murray songs and is produced by Duke Special.

The Irish classic, ‘The Beauty Queen of Leenane’ comes to the Market Place on 9 March, full of brash humour, rich language and inventive storytelling.

Big Telly Theatre Company return in March with a highly inventive blast of theatre, ‘Freak Show’, which tells the true story of people who were displayed as freaks in the 18th Century.

New for 2019 we bring you the magic of the big screen with our film screening nights, starting off with ‘Lost in Translation’ on 24 January.

Bill Murray and Scarlett Johansson star as an unlikely couple that find escape, distraction and understanding amidst the bright Tokyo lights.

Then, adding a bit of romance for February we have the classic Casablanca on 14 February. Later in the season, screenings will include ‘Gangs of New York’, ‘Jesus Christ Superstar’ and ‘Ida’.

As ever, The Market Place will host its hugely popular range of interactive and unique workshops, alongside its live entertainment programme.

This season you can try your hand at pottery, furniture decorating, woodturning, photography, cake decorating, needle felting, art journaling, soap making, and foreign languages, to name but a few.

Details of all events can be found online at www.visitarmagh.com/marketplacetheatre, and tickets for can be booked by contacting the Box Office on [028] 3752 1821.