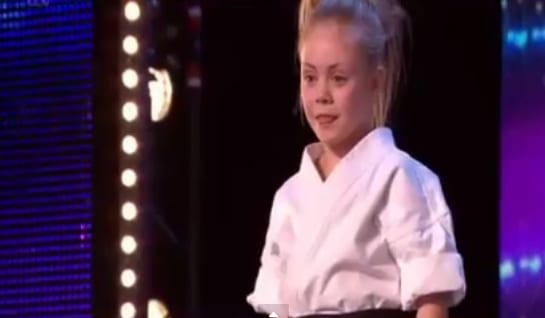 Keady schoolgirl Jessie Jane McParland had the audience on their feet and the judges breathless after stealing the show on Britain’s Got Talent last night (Saturday).

The eight-year-old has already featured in movies and competed on a global stage with her incredible skills in martial arts and kickboxing.

And now the ITV prime time show audience got to see why young Jessie Jane is taking the world by storm!

During an energetic performance she served up an exhilarating show of sword-wielding and leaps and kicks and overhead jumps and the looks on all four judges – Simon Cowell, Alesha Dixon, Amanda Holden and David Walliams – said it all.

Simon, not always the easiest to impress, was simply blown away.

As she completed her high energy routine, the audience rose to their feet, along with all four judges, for a much deserved standing ovation.

“Do you want a job as my bodyguard?” asked an overwhelmed Simon.

Ant and Dec, long-time hosts of the annual talent hunt, were also amazed by the display.

“Best to keep on her best side,” whispered Ant back-stage.

Asked why she got into her chosen field, Jessie Jane told the judges: “I used to do ballet and Irish dancing but I didn’t like it!”

Judge Alesha Dixon told the Keady girl: “You are one to watch in this competition. That was incredible.”

All judges gave the thumbs-up and Simon confirmed to the overwhelmed youngster: “Jessica. Four yeses. Congratulations.”

And as Jessie Jane left the stage, the judges continued to sing her praises, as Simon turned to the others and said: “You wouldn’t mess with her, would you?”

Backstage, and a phone call home from the home-grown star, to report she had “four yeses”.

Now it’s on to the next stage and, we cannot help agree with Alesha Dixon – this is one young star who has a chance to win Britain’s Got Talent.

Armagh I would like to wish Jessie Jane all the best in the competition – amazing doesn’t do it justice!

You’ve done us all proud!