Micro bangers stars of the show on action-packed afternoon 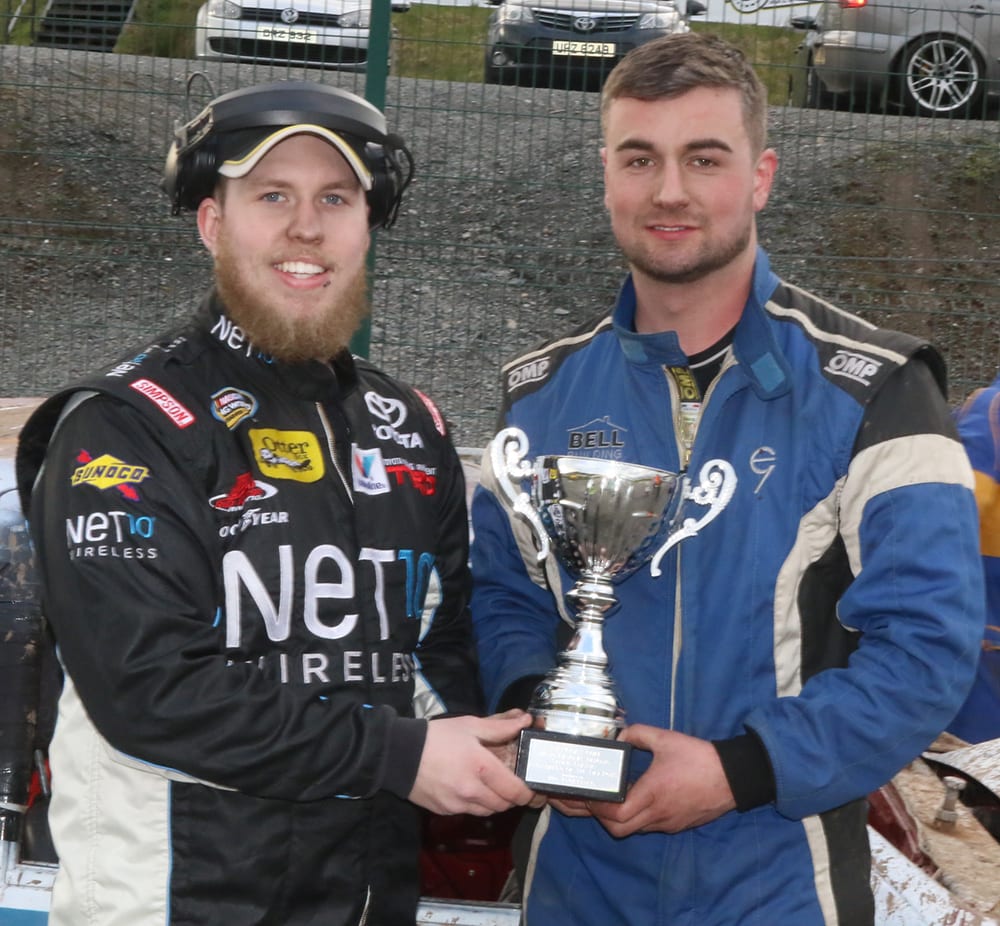 An afternoon packed full of entertainment was served up at Tullyroan Oval on Sunday afternoon, with a huge field of Micro Bangers the stars of the show.

Ballymena’s Karl Smyth raced through the on track chaos to land the Spring Classic victory, but the real winner was the Molly Smyth Moran Appeal as a huge amount was raised throughout the afternoon.

World Stock Rod Champion Marc Morrell also joined the fun too, and right from the off there was action all around the raceway.

William McFaul led the way for much of the distance until he got into trouble on turn three when he slithered into a number of parked cars. Amongst those parked up was Maxwell, and his day was over after a huge hit courtesy of Karl Smyth. Tony Gillespie took up the running but Bell sensationally stormed through to take the win on his banger debut, just holding off World Champion Steven Bolton at the line.

Heat two saw Thomas Brown take a big hit on turn three before Dwayne Lynch had a huge rollover on the home straight, whilst Christie also took a heavy knock by the startline. Leonard Dunn was the early pacesetter before Smyth slipped past to the win in his Corsa.

The Spring Classic Final saw Christie’s car obliterated in a huge wrecking train on turn one, as Smyth, Dunn and Bolton contested the lead.

Usual ProStocks ace Smyth held on to take the win, with Dunn and Bolton filling the podium at the end of a very bruising contest. The meeting ended with a fantastic Destruction Derby, with Bell getting well and truly stuck in and landing some heavy blows, particularly on Sean Rountree.

It boiled down to a fight between Glenn and the popular Rodney Herron, with Herron taking the win after Bell got beached on the sodden infield. Christie took the Best Wreck trophy whilst Bell impressed as he took the Entertainer of the Day Award.

A healthy 16 cars contested the opening 2.0 Hot Rods heat, with Glenn Bell being a busy racer as he contested his usual formula as well as the Bangers.

The going was very slippery in the rain for the opener, with Dungannon’s Jason Devlin coping best to take a welcome victory over Sean Dynes, with Adam Best in third at the head of huge star grade battle.

Jackie Christie took the win in the second heat ahead of a great battle between Thomas Dilly, Devlin and Stephen Emerson, the latter at the wheel of his new car.

The final turned out to be a cracker, with Christie going ahead early until reeled in by Dynes, whilst Bell was closing fast from the red grade.

Stuart Cochrane and Best joined the battle too, before a coming together on the Tullyroan end saw Best and Cochrane eliminated and Dynes given an early bath for his part in the incident. Christie lined up to lead Bell away for the two lap dash to the flag, but his transmission gave up the ghost at the worst possible moment and he was forced out of the restart.

That gave Bell a clear run to the chequered flag, as he took the 2ke Engineering trophy ahead of Emerson and the returning Mark Madill.

James Turkington led much of the distance in a superb opening heat, only for Lee Davison to reel him in late on. Turkington slowed to avoid a spun car on the final turn, with Davison getting involved too and breaking his front suspension.

Lee however was able to wrestle his three wheeled machine across the line to take the victory is sensational style! Turkington again led heat two before mechanical issues saw Greg Hyndman take over up front. Davison was going like a train again though, and sent Hyndman out to the wall as he stormed through for his second win of the day ahead of Sean Mark and Hyndman.

The final was another fine race, and as the laps ran down there was a six strong battle for the lead. Turkington lost out to James Logan for the top spot before Davison bumpered past to complete his hat-trick is superb fashion. Logan, Stephen Stewart and Mark completed the top four of a great race.

The young stars in the Junior Productions were contesting the opening round of the 2ke Engineering Young Guns Series, and they had to contend with a very slippery track in all three races as they followed the Bangers on the race order.

Aaron Ward set a great pace in the opening heat, but the conditions caught him out as he glanced the wall when well clear which finished his race.

Recent newcomer James Stewart took up the running, and then had Matthew Nicholl go down his outside at the same time as Adam McFall got past him on the inside! McFall pulled clear to take the win over Sam McNeice and Drew McKeown. Heat two saw a controlled win for Samuel Percy, as he raced home well clear of McFall and Davy Gurney after a huge scrap for the places.

Aggregate points put McFall and McNeice on the front row for the final, and after some hectic exchanges in the opening laps on a very slippery race track indeed it was McFall who grabbed the lead.

Adam drove a very calculated race to edge clear and take the chequered flag, the trophy and a nice track shop voucher courtesy of the sponsors. McNeice, Irish Champion McKeown and Graham Meek rounded out the top four.

The final formula on show were the Ninja Karts, with the opening heat falling to Max Hobson after he overhauled early leader Ryan Berry.

Hobson repeated the feat in heat two, but this time only after the Race Stewards had disqualified Daniel Stewart for contact during the race. The feature race saw a huge six-way battle for the lead late on, with Stewart swooping around the outside to take a great victory over Hobson and Lauren Berry.