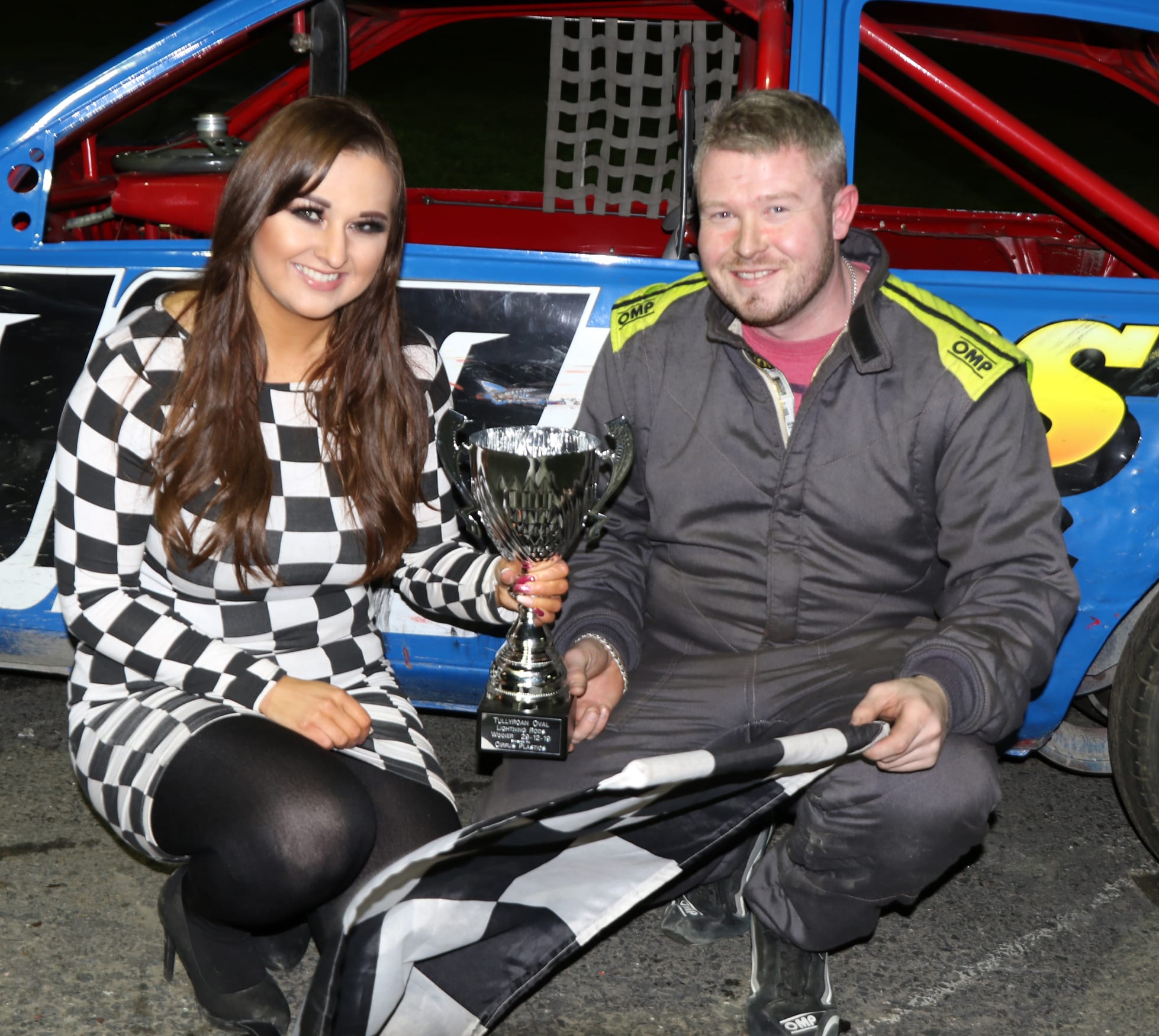 Dublin’s Paul Compelli took the victory in the Van-dalism 2019 title race as the Big Vans produced action galore during the day, whilst Drogheda’s Conor Finegan came out on top of a fine field of over thirty Rookie Bangers.

As always the Big Van Bangers produced entertainment like only they can, with drama galore from the first green flag. Leonard Dunn led early on in the main Van-dalism 2019 race before he was spun out by Rodney Herron. A fast moving Paul Compelli then swooped past to take the lead and the win over Herron and Dunn.

The Allcomers race saw all sorts of carnage as Stevo McGrath did his best to block the track! Herron avoided the drama to take the win over Matthew McKinstry and Compelli.

An absolutely superb Destruction Derby saw Steven Bolton and McGrath dishing out some huge hits as they attempted to destroy the others, with Herron, Daniel Dooner and Keith Winter all well involved too. It was top quality entertainment, with McGrath just taking the win whilst Bolton was crowned Entertainer of the Day.

With over thirty Rookie Bangers on track for their opening heat there was always going to be some fantastic action, with Paul O’Connor showing well out front early on. Matthew Milliken superbly spun him from the lead but lost ground himself too, which opened the door for Michael Hyland to take the win over Conor Finegan and Josh Goligher.

There was a huge track blockage on turn three during the second heat, as a number of drivers were caught out by the slippery conditions. Goligher and William McFaul disputed the lead, with McFaul getting the nod at the flag ahead of Thomas Megarry and Finegan.

McFaul led the final too before getting himself caught up with backmarking traffic late on which saw him eliminated on the Pit Bend. Finegan stormed through to snatch the victory over Peter McKenna-Murray and Aaron Eager.

An excellent out-of-season field of 2.0 Hot Rods took to the track for their opening heat, with Johnny McCloy setting the pace early on. He lost out to Drew McKeown at mid distance as the former Junior Productions multi-champion took the honours over Ryan McClure and Gary Wilson.

Welcome visitor Martin Meenahan led early on in heat two before Michael Woods and then McClure took over out front. McClure recorded a great win over Adam Best and Conor Hughes after Wilson was docked from second for contact.

McCloy showed some great pace in his new car in the final, edging clear and looking odds-on for the win until a late caution period when Adam Best was left stranded on the Tullyroan Bend. With just two laps left the pressure was now on McCloy with the rest now closed onto his bumper. Johnny settled back into the groove but was bumped wide on the final lap by McClure. Ryan took the flag ahead but was docked to third spot for his misdemeanour, handing victory to Allen Cherry. The unlucky McCloy had to settle for second ahead of the demoted McClure and Wilson.

Dermot Tynan led the opening exchanges of the first Lightning Rods heat, before James McKinney swooped past to the victory over World Champ Nigel Jackson and Mark Corry. Conditions were much more slippery in heat two, with Ronan McNally carding a faultless flag to flag win over McKinney and Ally Neill.

Tynan again led the opening laps of the final, before losing out at half way to McNally. Ronan was having a great day at the office as he raced home to complete his double for the day, with McKinney, Neill and Jordan Rochford filling the major places.

Shane O’Connor was the star of both heats for the Junior Productions, leading the opener from start to finish to take an excellent win over Sam McNeice and Sam Percy. Hannah Monaghan led the second heat before O’Connor again showed his class to land his second win of the day over McNeice and Monaghan.

With O’Connor upgraded for the final, Matthew Weir was able to set the early pace from the front and the recent newcomer impressed as he led to beyond the half way mark. Percy was the pick of the star graders in this one, and despite the close attentions of O’Connor, Sam was able to slip through to land a well deserved victory. O’Connor could be well pleased with his afternoon’s work in second, with Weir and McNeice next home.

The 2020 campaign at Tullyroan Oval commences in mid-March.