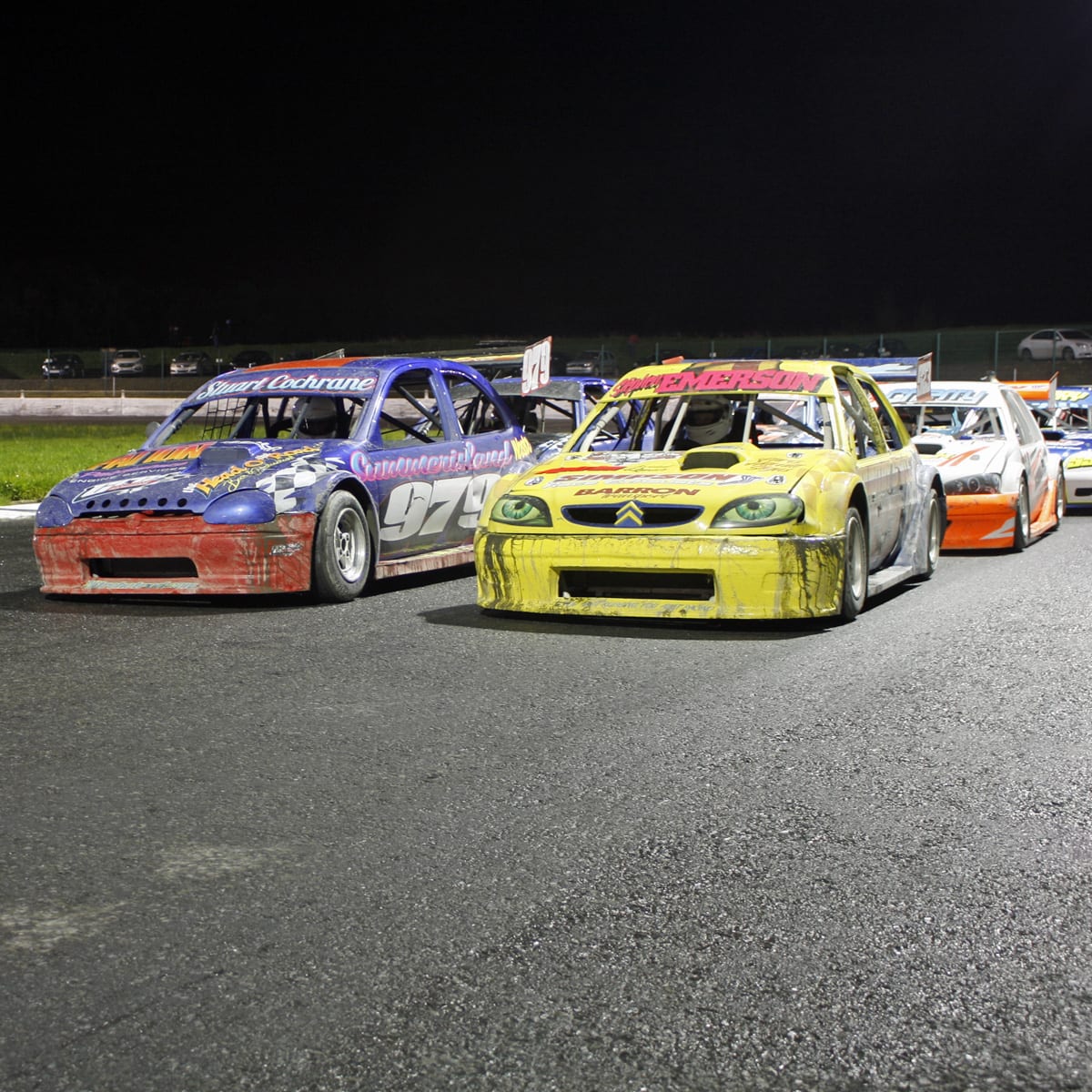 A controversial Irish Championship final for the 2.0 Hot Rods was the feature event for the 2.0 Hot Rods at a blustery Tullyroan Oval on Saturday evening, with Portadown’s Glenn Bell taking the coveted title after first across the line Stephen Emerson was demoted for contact during the race.

Crumlin’s Nicky Lowry was the other big winner as he scooped the 1300 Stock Cars Ulster Championship, with the other victors at the Bell Building sponsored meeting being Karl Smyth (ProStocks), Adam McFall (Junior Productions) and William Donnell (Thunder Rods).

Lined up in points scoring order from the 2017 season, polesitter Stuart Cochrane was the first to show in the 2.0 Hot Rods Irish Championship, the young Portadown ace stretching ahead early on as Stephen Emerson and Adam Best squabbled over second.

They traded places until Emerson got the better of the scrap to chase after leader Cochrane. He soon had Stuart under pressure, with Stephen then barging his way past into Turn Three as they entered the closing stages. Cochrane then got into all sorts of bother and his race was run, with Emerson first under the chequered flag ahead of Glenn Bell who had driven a terrific race from down the grid.

A Steward’s Enquiry followed, after which Emerson was unfortunately docked from the win for contact on Best and Cochrane, elevating Bell to the top step of the podium and the Irish Championship win. Best and Allen Cherry filled the podium places.

The reverse grid Irish Revenge race saw Mervyn Emerson set the early pace, before Bell charged ahead with a great outside line drive to seal his second win of the night. Best found a gap under M Emerson just as Bell got ahead, Adam coming home second with Cherry again completing the top three.

As expected the first 1300 Stock Cars heat was lively and full of action, with a number of caution periods as former Lightning Rods World Champion Winston Weir charged through to take the win over Peter Greer and Nicky Lowry. On what was the final night of points scoring towards the 2017 NI Points Championship, leader Jon McQuillan saw his hopes quite literally go up in smoke with a huge engine detonation which ended his night’s activities. Adrian McKinstry led the opening laps of the second heat, before Lowry scythed through to the lead and the win. McKinstry and Weir filled the top three, leaving Lowry and Weir tied for points for pole position for the Ulster Championship final.

A toss of a coin gave Lowry pole for the main event, and he was soon disputing the lead with McKinstry and Greer. They all had turns out front as the bumpers were put to good use, before Lowry got a break just when it mattered most. He came home to the Ulster Championship victory ahead of McKinstry and Greer. McKinstry’s second place saw him snatch the NI Points Championship win from McQuillan’s grasp.

The ProStocks were also on top form as they contested the Grand Final of the McElmeel Mobility Services Supreme Series Grand Final. Newly crowned World Cup Champion Alan Haugh was paraded to the crowd during the meeting to a rapturous welcome following his big win in Scotland the previous weekend. As the star men squabbled and traded blows in the opener, north west racer Norman Purdy surged ahead to take the win over Mark McLaughlin and Dan Shannon. Purdy again starred in heat two, grabbing his second win of the night ahead of British Champion Adam White and McLaughlin.

On aggregate points from across the McElmeel series, it was Joe Largey who netted pole position for the Grand Final – an excellent achievement in only his first season of racing. Joe quickly pulled clear before White came through to challenge.

Karl Smyth was on a charge from down the field, using the bumper in true Stock Car fashion to move those ahead from his path. He despatched Del McLaughlin which brought out the yellow flags for a caution, closing the gap to the leader on the restart.

Another stoppage followed soon after, and Smyth was right in contention now as both Largey and White were relegated from the top spot. Smyth powered home for a fantastic win ahead of Steven Haugh and Largey after an excellent race.

It was the Grand Final of the 2ke Engineering young Guns Series for the Junior Productions, with Gareth Halliday inheriting the win in the opener after Sam McNeice was docked two places for contact during the race. Heat two saw a first ever win in the formula for Aaron Ward, the former Ninja Kart star withstanding great pressure late on to take the flag ahead of Halliday and Graham Meek.

Meek and Irish Champion Drew McKeown shared the front row for the Grand Final of the 2ke Engineering Young Guns Series, with Meek setting the pace ahead of McFall on what was a tricky track as the rain began to fall on the young stars. McFall was driving extremely well, and he calmly found a gap under Meek to race ahead to the title win. McKeown was docked from second for contact, elevating Halliday and McNeice to join winner McFall on the podium. All three received tyres from the series sponsor for their efforts.

The unusual Vauxhall Vectra of David Baird was a clear winner of a very wet opening Thunder Rods heat, David coming home clear of Gareth Robinson and Ashley Hawe after William Donnell had been excluded for contact. Two early caution periods in heat two wiped out Baird’s early advantage, with star man Robinson excelling as he guided his Astra through for the win after long time leader Hawe his big trouble on the back straight late on.

The feature race final was all about Donnell though, the Larne man showing the rest a clean pair of heels to take a commanding win. Robinson and David Wilson filled the top three, the latter also claiming the NI Points Championship in the process.

Next up at Tullyroan is the annual Gala Night this Saturday October 28th (6pm start). There will be a huge Fireworks Display as well as Irish Championship finals for both the 2L National Bangers and ProStocks. The Superstox contest their NIOvalTV Series Shootout Final, with Lightning Rods and Reliant Robins also on the bill.