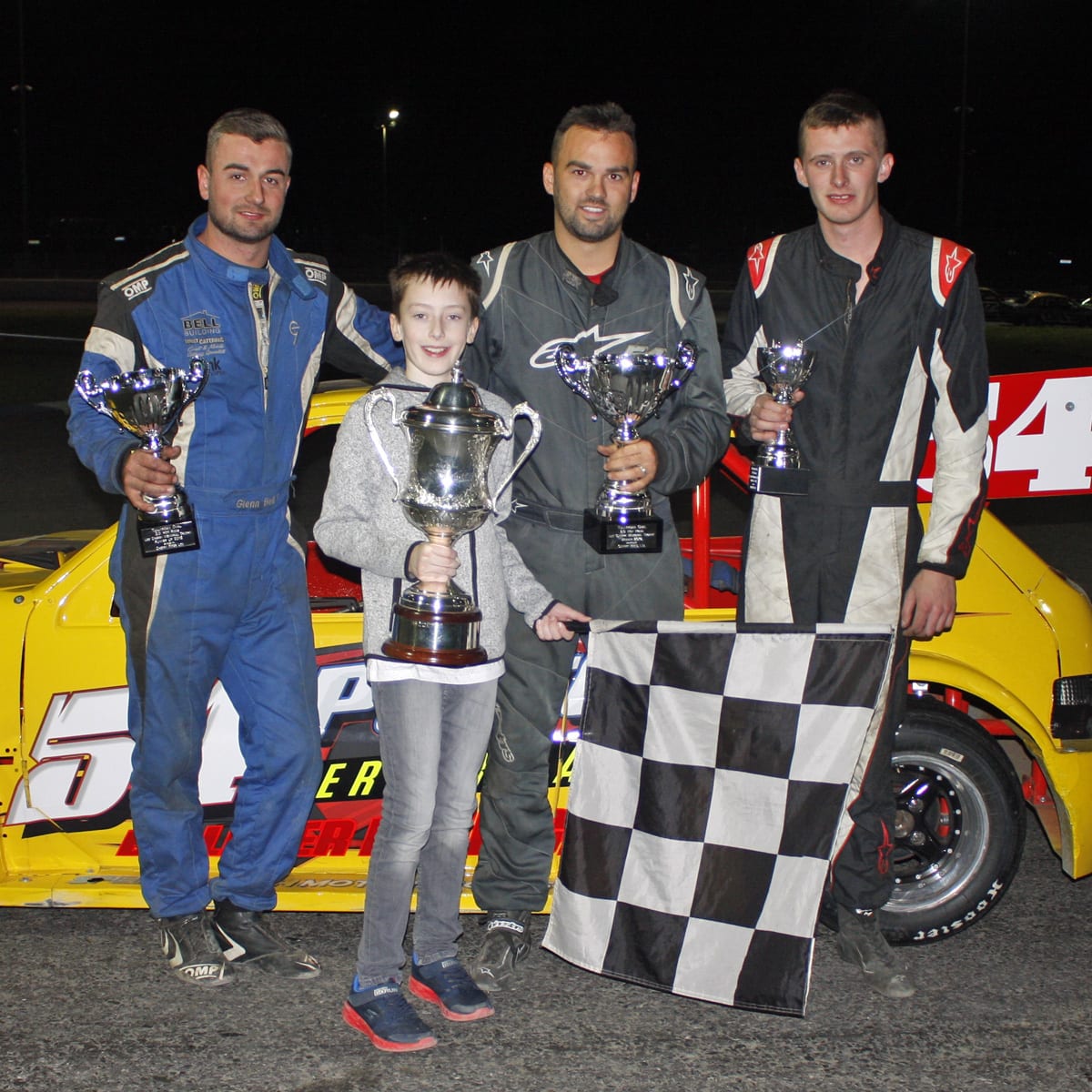 – Adam Hylands (centre) won the Lee Cherry memorial Trophy for the 2.0 Hot Rods leading home Glenn Bell (left) and Ryan McLure (Right) and was presented with the trophies by members of the Cherry family

The coveted Lee Cherry Memorial Trophy was the highlight of Saturday evening’s race meeting at Tullyroan Oval, and it was Portadown’s Adam Hylands who landed the silverware after an excellent performance in the 2.0 Hot Rods.

There was some thrilling action from the 1300 Stock Cars as they contested the Grand Final of the Ryan Wright Signs Iron Man Series which fell the way of Birches star Robbie Wright.

Ballymoney’s Lee McCloy won the special challenge event between the Thunder Rods and Tipperary Raceway’s Premier Rods, whilst the other feature race wins at the Cherry Pipes sponsored meeting fell to Dermot Tynan in the Lightning Rods and James Stewart in the Junior Productions.

Brian Cherry set the early pace in the opening heat for 2.0 Hot Rods ahead of the returning Mark Madill, but it was Allen Cherry who was the man on a mission.

He quickly roared past to the lead and the win, tracked all the way home by Adam Hylands. Heat two was all about Ryan McClure, as he raced clear to take the win over defending champion Glenn Bell and Hylands.

Hylands and Bell were tied on points, with the toss of a coin giving Hylands pole spot for the Lee Cherry Memorial Trophy Final. Bell hung on gamely for the opening few laps on the outside, but he had no answer to Hylands superb pace. The Portadown man drew clear to take the win and the fantastic trophy, with Bell and McClure the placemen.

The 1300 Stock Cars produced some outstanding action as they contested the Grand Final of the Ryan Wright Signs Iron Man Series.

Jamie McCann and Robbie Wright contested the heat one lead into the final bend, their ensuing dust up only allowing Jon McQuillan to sneak through for the victory.

Unfortunately Jon was later loaded up from the whole meeting for a technical infringement, meaning the win went to Wright over McCann. Ryan Stewart was the man who led the final stages of the second heat, before Wright went in hard into the final bend to take a great win.

Aggregate points from across the series lined up the final grid, with Wright on pole position. He was shifted wide by McCann early on before Peter Greer and Michael Logan also got involved as the bumpers flew in and the sparks were flying! Greer, Ryan Stewart and Logan all ended up hard in the wall as the action continued, with Robbie Wright coming home for the win after a fine recovery drive.

His brother Davy Wright took second and Josh McKinstry third, with all three winning tyres courtesy of the series sponsor Ryan Wright Signs. After the superb final Ryan very kindly put up a cash prize for an extra Dash for Cash race at the end of the programme, which fell to Jamie McCann after another action packed outing.

The Thunder Rods were joined by a number of welcome travellers from Tipperary Raceway’s Premier Rods formula for a special challenge meeting.

There was a great array of machinery on display, with David Gurney from Londonderry taking the first heat after holding off a strong Premier Rod challenge early on. Lee McCloy and James Goldie came through for second and third at the chequered flag. The second heat saw a morale boosting win for David Baird, with Gavin Gamble and Goldie next up.

The final saw McCloy and Goldie on the front row, with the duo setting off in that order out front. Goldie looked but wouldn’t commit to the outside pass, with Andrew McLean keeping a watching brief behind.

It was becoming a really intriguing event, with nothing between the top cars and a large band of backmarkers looming ahead as they entered the final stages.

The crowd were kept on their toes right to the end, with McCloy just getting the verdict ahead of Goldie, with a fantastic charge around the outside netting David Wilson third on the line. Joe Fitzgerald received a trophy as the top Premier Rods finisher.

An excellent field of Lightning Rods saw a debut for James McKinney amongst the 21 car grid, and they produced some superb racing all evening. Dermot Tynan set the early pace in heat one but lost out mid race to a flying European Champion Jordan Rochford, who went on to win despite a late race caution period, with Dylan McCann and Scott Cochrane next home.

Novice graders Tynan and McKinney set an excellent pace at the start of the final, with Tynan especially looking very good indeed. Rochford was again making great strides towards the front, and once he got to third was still almost half a lap in arrears.

He quickly got the hammer down and reduced the deficit, slipping past McKinney to go second. With backmarkers between them Tynan was just able to hang on to record a fantastic final victory after a great drive, with Rochford excellent value in second and McKee and Jackson next home.

Aaron Ward drove superbly to win the opening Junior Productions heat, heading home Sam Percy and James Stewart with a great dice in the pack between Adam Weir, Adam McFall and Graham Meek. Stewart took a clear heat two victory over Matthew Nicholl and Sam McNeice, before James repeated the feat in the final to take a great win and earn a rise to the blue grade for the next meeting.

Ward and Irish Champion Drew McKeown were next home after another positive night from the stars of tomorrow.

The latest round of the Superstox NIOvalTV Series and the Ninja Karts Tullyroan Challenge Cup completes the race card.