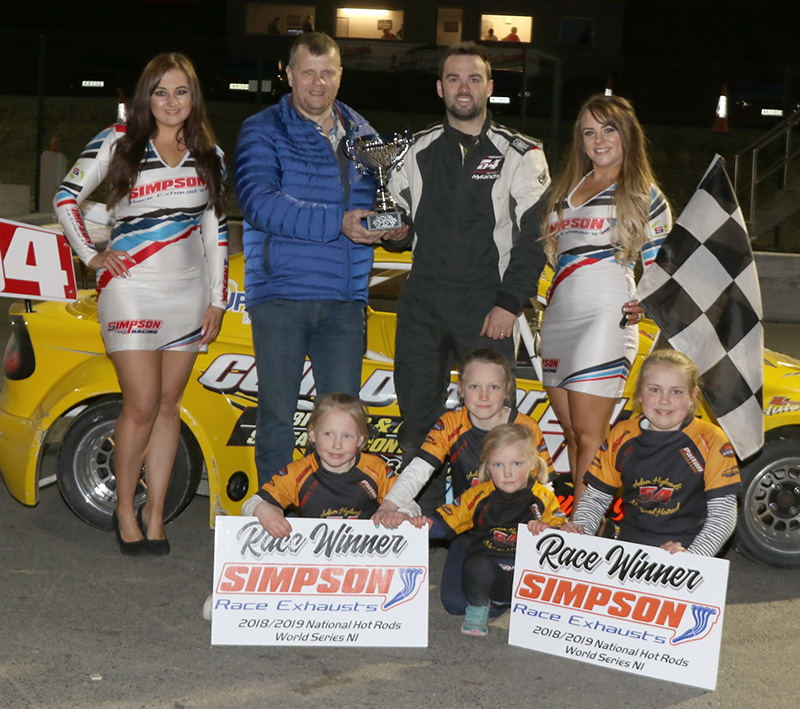 Portadown National Hot Rods star Adam Hylands was on top form once again at Tullyroan Oval on Saturday evening, taking his third feature race win in as many meetings at the circuit in Round 12 of the Simpson Race Exhausts World Series NI.

There were six formulas in action at the DRS Steelbuildings sponsored meeting, with World Champion Lee Davison from Portadown landing the win in the Tullyroan Challenge Cup for Superstox ahead of Scottish visitor Bryan Forrest. Graham Meek took the Junior Productions Tullyroan Challenge Cup win, whilst Randalstown’s Tim Hazlett was victorious in the opening round of the A Percy Auto Body Repairs Challenge Series for Lightning Rods.

The other feature race wins went the way of young Antrim star Leyton Hughes in the Ninja Karts and Dublin’s Paul O’Connor in the Rookie Bangers.

Round 12 of 14 of the Simpson Race Exhausts World Series NI for National Hot Rods saw an excellent entry of 18 cars, with Kenny McCann the first to show in heat one. He lost out to the battling duo of Podge McQuaid and Keith Martin, with star man Adam Hylands chasing them hard. McQuaid hung on to take a morale boosting victory over the impressive Hylands who was showing great pace on the outside line. Heat two saw Ian McReynolds spend many laps out front, before losing out to a sublime outside pass from John Christie. Glenn Bell and Hylands filled the major places.

Having qualified on pole position it was hard to see past Hylands in the final, and he duly pressed ahead right from the off. Bell and Christie kept him honest all the way home, but Adam reeled off yet another final win at his home circuit, his third in as many meetings at Tullyroan this term. Bell, Christie, Keith Martin and Derek Martin filled the places.

The local Superstox drivers were joined by welcome Scottish visitor Bryan Forrest for the Tullyroan Challenge Cup. Ballymena driver Colin Hamill was first to show in heat one in his beautifully turned out machine, Colin leading until challenged by Aaron McNeilly in the closing stages. Aaron went ahead on the final lap only for Hamill to get back inside him exiting the final turn. Colin spun the McNeilly car, but only succeeded in pushing him sideways across the line in a stunning finish! McNeilly took the honours ahead of Hamill and recent form man Jordan Robinson. Paddy Murphy went ahead early on in heat two, before losing out to David Beattie before a caution period when Stephen Stewart found himself stranded and facing the oncoming traffic on the back straight. Beattie led on the restart but hit mechanical woes late on, handing the lead back to Murphy. Paddy withstood a last bend hit from Robinson to take the victory in another great finish, with Forrest sneaking second on the line.

The closed grid start to the Tullyroan Challenge Cup was explosive, with Conor Murphy and Keith McAreavey finding the wall on the Tullyroan Bend. Robinson settled into the lead, with World Champion Lee Davison bearing down on him, tracked by Forrest. Davison made his move with four laps to go, nudging past the leader with Forrest quickly following suit. Bryan just couldn’t get close enough for a last bend lunge, leaving Davison to take a deserved win over Forrest and Sean Mark.

Tim Hazlett quickly established himself out front in the opening Lightning Rods heat, utilising his drop to the blue grade to take a comfortable win over Mark Corry and Nigel Jackson, the latter having had a great run on the outside line. Heat two saw a polished flag to flag win for Ronan McNally, with Martin O’Flaherty and Ricky Shaw next up after Hazlett was docked from third by the race stewards.

Despite his penalty, Hazlett had still qualified on pole position for the Round 1 Final of the A Percy Auto Body Repairs Challenge Series. Jackson made light work of O’Flaherty to go second, and he then chased hard after leader Hazlett. It was Hazlett’s race though, and he powered home to collect the silverware and a nice voucher courtesy of the series sponsors. Jackson was good value in second, with Shaw third after a great drive on the outside of O’Flaherty.

There was a welcome debut for Chelsy Rainey in the Junior Productions as they raced for their Tullyroan Challenge Cup. Irish Champion Adam McFall and Mark Crawford disputed the early lead, which ended in tears when McFall was spun out which later earned Crawford a disqualification. That opened the door for Matthew Nicholl to take the win over James Stewart and Points Champion Sam McNeice. Heat two was another fraught encounter with Stewart this time on the end of a disqualification, as Graham Meek took a clear win over McNeice and Jack Morrow.

Nicholl led the Tullyroan Challenge Cup final away, with Meek immediately on his case at the head of the field. Meek tested Nicholl’s nerve as he swarmed all over his rear end, finally finding a way past with five to go. As Meek pulled clear to the victory, Nicholl was unfortunately railroaded out of contention. McFall came through for a commendable second after qualifying down the grid, with Morrow and Stewart next home.

Leyton Hughes and Rhea McConkey disputed the lead in the opening Ninja Karts heat, which saw the great sight of no less than nine novice graders on the grid. A huge gaggle of backmarkers lay ahead of the leaders on the final lap, and as Hughes and McConkey went to the outside star grader Max Hobson found a way through on the inside line to snatch a very commendable win over Hughes and Odhran Monaghan. Heat two saw Monaghan lead before losing out to the flying Hughes, Leyton then powering home to the victory over McConkey and Monaghan.

Hughes and Monaghan again disputed the lead in the feature race final, with the pair having a right old scrap which allowed Hobson to join their battle in the closing stages. Hughes just held on for a fantastic win, which earns him a rise up the gradings for the next meeting. Hobson came home second ahead of Monaghan, McConkey and Lacey Bevan.

The Rookie Bangers completed the packed race schedule, again producing some excellent action all around the circuit. A great battle developed in the opener between Josh McKinstry, Josh Goligher and Deano McGrath, which fell the way of Goligher when the flag dropped. McGrath took the honours in a bruising heat two, before fellow Dubliner Paul O’Connor raced clear to take the honours in the final. Thomas Megarry and Philip Farrell completed the podium places.