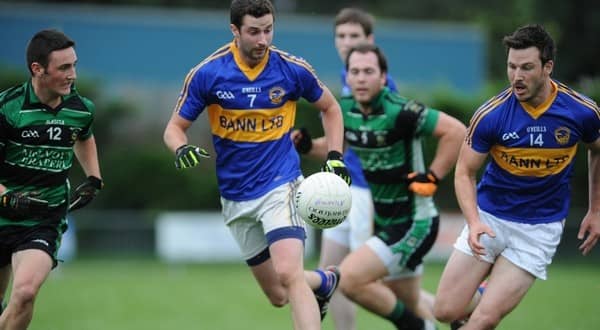 St. Killian’s Whitecross and Maghery finished level in a very eventful match which is sure to trigger a lot of talking points and debates this week.

The game actually started fairly flat with Maghery dominating and stretching into an early six point lead, but things exploded when a full scale brawl broke out just before half time. After sanity was restored both teams engaged in an exciting battle in the second half. Whitecross produced a hearted comeback to tie the game up late on, which means this one will have to be decided from a replay.

It was a nervy start from both teams, with each side giving away possession fairly cheaply and struggling to get the fluidity into their play. The first point came from a free kick which was struck over by Mark Shields from 50 yards.

Aidan Forker levelled things with a close range free and Shea Tennyson put Maghery in front straight after when he gathered the ball and struck over efficiently on the 10th minute.

Mark Shields who had a major role to play for Armagh this year, got his second point with another well struck free kick from the ground.

Maghery began to get into the swing of things midway through the first half. Jack Lavery showed off his powerful pace when he went on a steaming 40 yard run , but he was brought down by the Whitecross defence and the free was converted by Stefan Forker.

Maghery started driving at Whitecross, points from Stephen Cusack and a brilliant left footed volley from Shea Tennyson which nestled into top left corner of the Whitecross goal left the score at 1-05 to 0-02.

Stefan Forker added another point on the 23rd minute. But the gap was reduced after Conor Malone put one over from long range, and Cathal McSherry smartly found space to latch on to a line ball from Malone then struck a score with his right.

Jack Lavery put the deficit back to six with an impressive point. Lavery run at his marker down the right flank and faded from side to side to confuse the defender before casually scoring from a tricky angle.

A moment of madness then broke out just seconds before half time. Maghery’s Aidan Forker appeared to strike Eamon Reavey off the ball, which sparked a huge protest from the Whitecross players and support. This protest triggered off a gruesome full scale fight, with large numbers of players and club members from both teams getting involved.

After things had calmed down both teams went in for their half time break. But when they lined out for the second half referee Steven McKinley acted immediately by punishing both Aidan Forker and Eamon Reavey with a red card for their part to play in the brawl.

The football got back underway and Barry McKeown pulled two back with identical free kicks from 20 yards, to leave the score at 1-07 to 0-06, after 34 minutes.

Just as Whitecross were beginning to look composed and settled they received their second red card of the game. Conor Malone was sent to the line for a second bookable offence.

Maghery took immediate advantage and put the deficit back to five when Stefan Forker struck an impressive point which came off the post.

Colm O’Hanlon who had been introduced for Whitecross just before half time, scored a free kick with his left from the right wing.

Maghery responded with a great team point, a number of attackers combined well with some nice short passing play, and even looked like they were going to work their way in for a goal. But Conor Forker decided to take the point from close range.

On the 42nd minute the game turned completely for Whitecross. Neill McSherry lashed in a peculiar goal from 40 yards. The half forward struck an awkward fizzing shot which carried great pace and unlike many goals from that distance didn’t hit a massive height. It was also difficult to condemn Maghery goalkeeper Johnny Montgomery because he put great effort in to diving for the ball. The awkward loop just beat his massive efforts.

Stefan Forker responded to the knockback with a point from a free, and the impressive Shea Tennyson soon added another to leave his match tally at 1-03.

Whitecross may have been trailing by four but they were certainly showing a lot of hope and hunger after the goal and Colm O’Hanlon scored his second from a free after Mark Shields was brought down.

As the end loomed both teams really put everything they had into the game. Cathal McSherry scored a massive point from a 45 yard free kick. He got his third minutes later with a point from the right wing which the left the score at 1-11 to 1-10 in Maghery’s favour 50 minutes into the game.

The fourth red card was produced on the 52nd minute when Gerard Campbell was dismissed for Maghery, this sending off left each team with 13 players on the field.

Dermot Boyle levelled things with a point from the right and on the 55th minute Barry McKeown put Whitecross ahead for the first time since the 9th minute of the match.

The atmosphere was fantastic with each clubs fans really getting behind their team and driving them on. Whitecross were leading just as injury time was approaching but two free kicks completely turned the game around. Stefan Forker put the first over from a tight angle on the left hand side and the left footed Shea Tennyson converted the second to put Maghery one ahead.

Whitecross never admitted defeat and Mark Shields carried the ball forward before earning a free kick for the trailing team in the very last play. Barry McKeown bravely put the ball over the bar, and the full time whistle immediately followed, as the game finished 1-13 to 1-13.

This game will be the topic of many conversations this week, maybe for the wrong reasons, but let’s not dwell on the negative issues. Both of these teams put everything they had into a game which presented a very exciting and unpredictable ending, and they have to do it all over again next Sunday. The replay will take place in the Athletic Grounds on September 7 at 8pm.