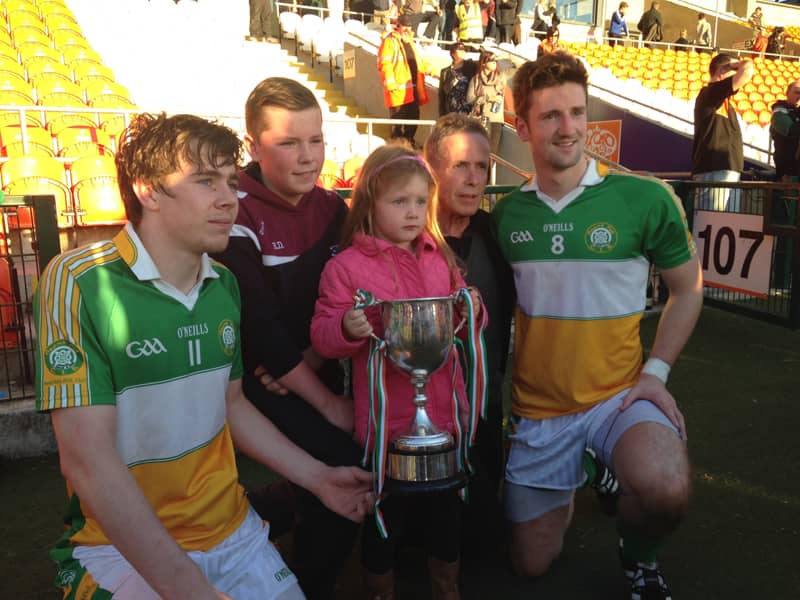 St Paul’s of Lurgan claimed their first Armagh Intermediate Championship in 30 years with victory over Grange this afternoon.

The North Armagh side’s only other Intermediate title came back in 1984 where, coincidentally, Grange were the opposition.

St Paul’s were quicker out of the block in the Athletic Grounds today with a free from Michael Shanks after just 60 seconds.

Shanks added a second point from the dead ball about 50 meters from goal on 8 minutes before Grange opened up their account through Conor Toal on 10 minutes.

Cathal McKenna levelled matters a minute later with a great point, with the hard work being done by full-forward Brendan rafferty. Grange then took the lead with a goal on 13 minutes. McKenna was instrumental in the build-up – his shot on goal deflected into the path of Paraig Rafferty who fisted into the net.

St Paul’s then kicked into action after an encouraging start. Ryan Lawless, Andy Murnin, Daniel mcDonald kicked three successive points before Lawless added another just before the break to leave just a point in it.

Joseph Kerr saw black on 25 minutes which seemed to have contributed to their run of 15 minutes without a score.

However, this game turned in St Paul’s favour just after break when a high ball in was won by Andy Murnin who laid it off to the onrushing Lawless who smashed it home.

Michael Shanks added a free before Niall McParland put four between the sides.

The signs were ominous for Grange at this point but Brendan Rafferty had other ideas. His effort on goal after a great run from Eoin Rafferty bounced over the line to give his side a lifeline.

Cathal McKenna equalised with a long range point before a massive Ehan Rafferty point gave Grange the lead for the second time in the match.

Michael Shanks levelled things up with his fourth of the match.

With 20 minutes remaining, this Intermediate Final took another turn when Murnin was fouled in the area. Niall McParland stood up and cooly dispatched the ball to the keeper’s left.

Lawless added another point for St Paul’s but Micheal McKenna restored the deficit to three less than a minute later.

St Paul’s began to push on and soon added another point following a marauding run down the right from the man in the illuminous boot – midfielder Chris Lavery.

McDonald extended the lead to five points with a free on 51 minutes.

A huge Micheal McKenna point and assist for namesake Cathal brought Grange within a kick of getting something from the game but McKenna’s last act of the game would be a premature one. A second yellow in injury time compounded Grange misery.

There were penalty appeals from Grange deep into stoppage time but referee Paudi Hughes was having none of it as he blew the final whistle soon after.

listen to ‘Shane McConville’ on audioBoom