Ogs through to last four 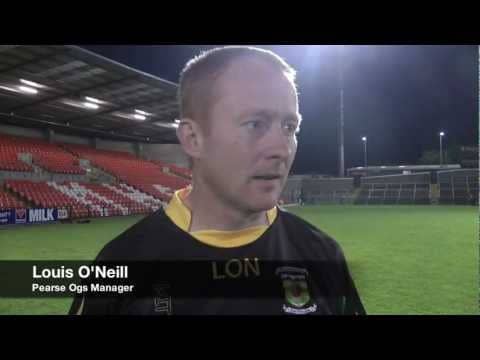 PEARSE Ogs comprehensively dispatched of last year’s county finalists Ballymacnab to book a place in the last four of the Senior Championship.

The Ogs will now face St Patrick’s who themselves were fortunate to beat Culloville the previous weekend.

The game, played on Saturday evening in the Morgan Athletic Grounds, started with both sides trading points early on. Conor Clarke tapped over two early points for the city side before two Rory Grugan points (one free) restored parity.

A Marc Cullen free on 9 minutes put Ogs’ noses in front but once again Grugan responded from the dead ball however this was as close as the ‘Nab were going to get.

Sean Clarke, Chris Rafferty and Conor Clarke all pointed before Andy Mallon surged up the field from centre half back to put his side four in front. The advantage was extended to seven as Tommy Turley, Cullen and Sean Clarke all had efforts sail between the point.

And the game was effectively over minutes before the break when Conor Clarke picked up the ball fifty metres out, slipped it to JP Donnelly who galloped through the centre, before slipping to the unmarked Cullen six yards out – he made no mistake as he buried it past Sean Hughes in the ‘Nab goal.

Gavin McParland responded with a well-struck right footed shot but Sean Clarke cancelled that score out right on break with left-footed score that came from scraps. That left 10 in it at the break.

For Ballymacnab the second half was an improvement but the could have been to a drop of intensity from their opponents. Marc Cullen put 11 between the sides with another free 7 minutes into the second half.

The Ogs then went 15 minutes without registering while the Nab chalked up three scores through Grugan (free), Paul Kennedy and Pauric Gribben. In that time Philip McCone was shown the line.

Sean Moore then ended the mini drought with a gaol. Ronan Clarke bore down on goal but his shot was brilliantly stopped by Sean Hughes, however, the rebound was scrambled in by Moore.

Grugan got his fifth and Ballymacnab’s eighth with just over five minutes of normal time remaining.

Paul Duffy and Ronan Clarke polished off the Ogs performance with a point a piece.