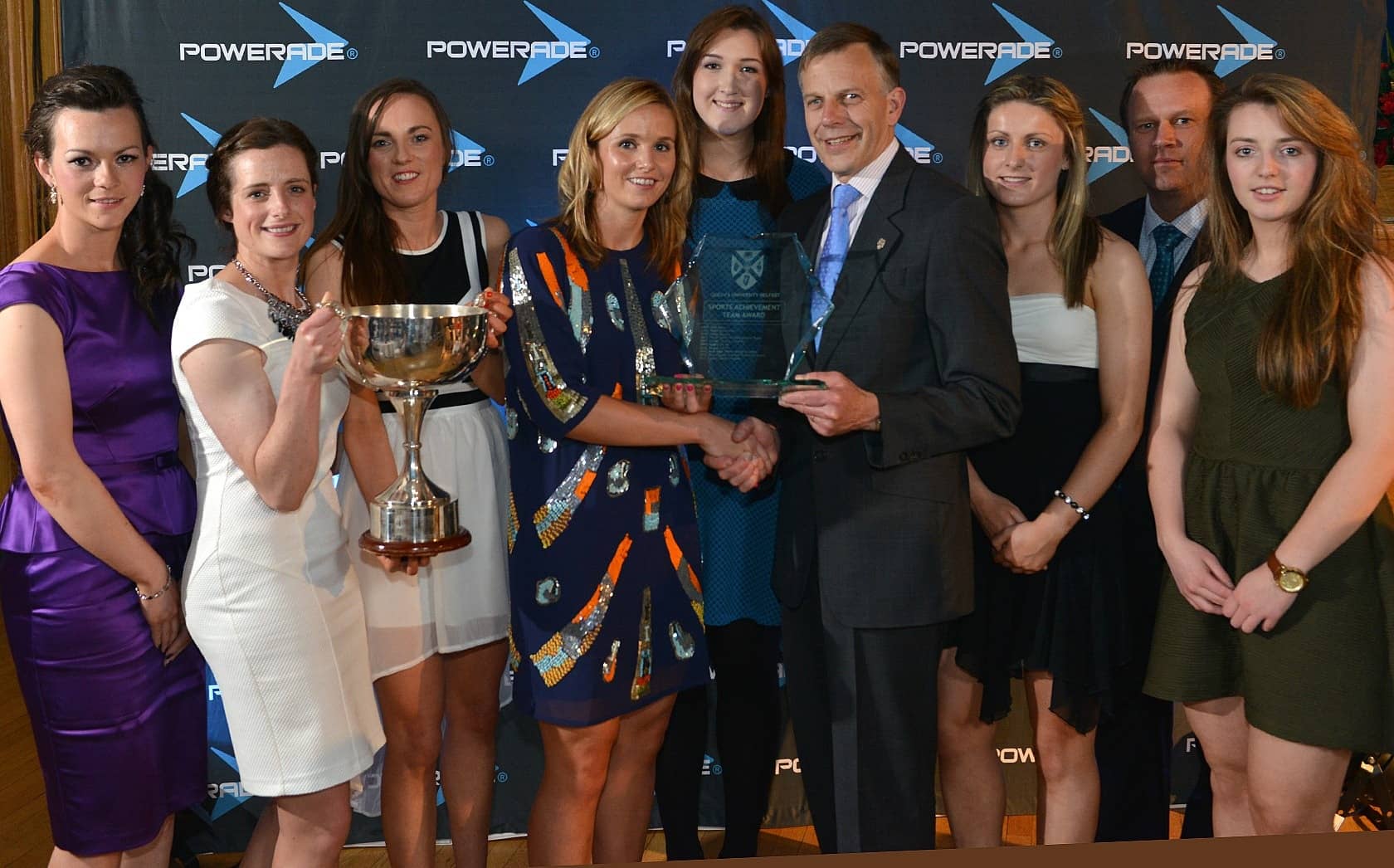 Armagh star Sinead McCleary has been named Queen’s University Sportsperson of the Year after leading their ladies gaelic team to historic success this spring.

In March, the classy Clann Eireann player captained the Queen’s side which lifted the prestigious O’Connor Cup, the female equivalent of the Sigerson Cup as the All Ireland for student footballers, for the first time ever.

Queen’s had never even reached a final before but the vastly experienced McCleary, in the last year of her second degree, led a team containing six Armagh players to a convincing victory over fancied Dublin City University in the decider.

The previous day, the Belfast side had shown considerable character in coming from behind in injury-time of their semi-final with a last-gasp goal from Armagh’s Caitlin Malone before going on to defeat title holders University College Cork in extra-time.

The Queen’s success had a distinctly orange flavour with Armagh manager James Daly in charge of a team featuring his daughter Katy as well as McCleary, Malone, Fionnuala McKenna, Sarah Marley and Danielle Morgan.

Inspirational skipper McCleary, her fellow midfielder Malone and goalkeeper Katie Daly all received student All Star awards while boss Daly described McKenna as the best player on the field in the decisive second half of the final.

Armagh Harps star McKenna scored three points from play in that final half hour as, rather than sitting back on a narrow lead, Queen’s boldy hammered home their advantage and withstood the sinbinning of medical student Malone from Carrickcruppen.

It was an outstanding success for Daly and his players, with McCleary, Malone and McKenna earning particular praise at the time along with Westmeath’s Ruth Kearney, who scored 2-3 in the final.

Their exceptional efforts were recognised at the recent end-of-term Queen’s Blues Awards as the ladies gaelic team deservedly scooped the Team of the Year title and McCleary lifted the individual honour.

Daly himself missed out in the Coach of the Year category but expressed delight that the side’s historic success had earned them the tag of best student side at Queen’s.

“It was a special season for the Queen’s ladies and this award underlines how proud the university is of what was a fantastic achievement – something that hadn’t been done before in spite of the top players who have previously pulled on the jersey.

“As for Sinead McCleary, you have to be pretty exceptional to win the individual award considering the calibre of sportsperson across the board that attend a major university but she’s a special player who definitely deserves this accolade.

“I said when Sinead was named in the National League Team of the Year that she’s the most under-rated ladies footballer in Ireland so I’m pleased she’s getting a bit of recognition.  She’s such a great athlete, a very versatile player and brought real leadership too.”

McCleary and McKenna, who captained Queen’s Freshers to the All Ireland Sevens crown earlier in the season and was named ladies football Fresher of the Year, have been hugely influential figures for Armagh so far in 2013 and they really stamped their class on the O’Connor Cup.

Although the towering Malone has been around the county panel for a number of seasons she has stepped up this year as a regular starter while teenager Daly is in her first term as the county’s first choice goalkeeper.

Picking up an O’Connor Cup medal was a bonus for part-time student Marley, who like McCleary brought battle-hardened experience and maturity to a side sprinkled with freshers, while her role with Queen’s has helped earn Morgan more opportunities with Armagh.

“I’m hugely honoured to receive the individual award considering the number of hugely talented and high-achieving sportspeople who are students at Queen’s, but it too is a reflection of the great team effort which brought us this historic success,” reflected McCleary.

“It was a privilege to captain this team and I’d like to thank every player for their committed contribution and of course our manager James Daly for his tireless, effective efforts to make us successful.

“We did the university proud in winning the O’Connor Cup and in turn we’re very proud to have been awarded Queen’s Team of the Year.  Every player dreams of winning with club and county but, whatever any of us achieve on those fronts, I think this will always count as a special chapter in our careers.”