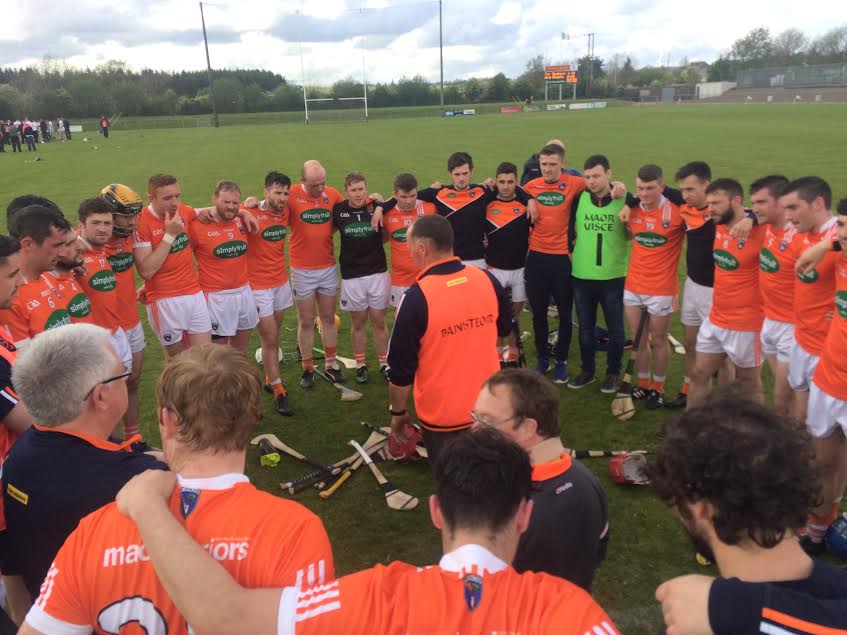 Armagh senior hurlers produced a superb performance in Carrickmore on Saturday afternoon to easily overcome their Tyrone hosts and win a place in their third successive Nicky Rackard final.

The Orchard hurlers roared out of the traps to lead by 1-8 to 0-0 after a blistering opening 15 minutes. Fiachra Bradley hit the opener and Armagh were celebrating after a long David Carvill free dropped in front of goal and evaded the keeper to finish to the net.

Carvill added five further points and points from Dylan McKenna and a long-range free from Nathan Curry left Tyrone shocked at the Armagh pace and hunger, as the Armagh half-back line excelled and mopped up the Tyrone puc outs. Conor Grogan got Tyrone up and running on 16 minutes, followed closely by two Damien Casey frees, but frees from captain David Carvill and Conor Corvan kept the Orchard well ahead.

Then Armagh forward line provided some great inter-play with fantastic work from Cahal Carvill and Danny Magee put Conor Corvan through for another and fresh from his Armagh poc fada title, Nathan Curry hit a monster free to put Armagh 1-12 to 0-3 ahead. Casey and Bryan McGurk mustered up a couple of further scores for Tyrone, but a dominant first half performance was capped off with a Danny Magee point to bring the sides in at the break 1-13 to 0-5.

The second half was. Aren’t underway when The impressive David Carvill added to his tally, but three consecutive scores from Tyrone’s top scorer Damien Caseybrought the gap back to single figures. Two scores from play for Nathan Curry were followed by a lovely score from Ryan Gaffney, who showed tremendous skill to flick the ball over his head out of reach of his opponent and turn and finish between the sticks.

Tyrone were offered a bit of hope with Bryan McGurk taking advantage of a lapse in the Armagh rearguard to finish to the net. Shortly after he could have been celebrating a second green flag but his effort blazed over the bar. A Ryan Gaffney score and David Carvill efforts from play either side of a Damien Casey effort left the score at 1-20 to 1-9.

With Armagh continuing to exert pressure, the Tyrone defence were caught out and gave away a penalty, which was neatly converted by Nathan Curry. Tyrone’s Ryan McKernan and Damien Casey responded, but David Carvill hit another free to leave the score 2-21 to 1-12 with 10 minutes remaining.

A close-in free from Casey was driven at the net but a good stop from Simon Doherty was then cleared up the field by Ciarán Clifford who had a solid game in defence. Casey did add to his tally with a 65 and one from play, but Armagh finished off as they had began as they took control in the final minutes.

A great score from Conor Corvan was followed by one from Ryan Gaffney and the recently introduced substitute, Dean Gaffney, got in the scoring sheet as he hit a point despite facing away from goal.

The game was wrapped up as David Carvill, who had certainly led the way over the 70 minutes as team captain, converted a free after Tyrone’s Stephen Donnelly received his second yellow.

Overall, Armagh will be delighted to win a place in the Croke Park decider for the third consecutive year. They hurled very well, particularly in the first half and showed tremendous desire and hunger during the game. Ciarán Clifford, John Corvan and Paul Gaffney stood out in defence and good performances from Nathan Curry, David Carvill and Ryan Gaffney will please Armagh manager Sylvester McConnell.

Armagh will now face competition favourites, Derry, on June 10 after they comfortably dispatched of the Monaghan challenge 6-17 to 1-12 at Iniskeen.