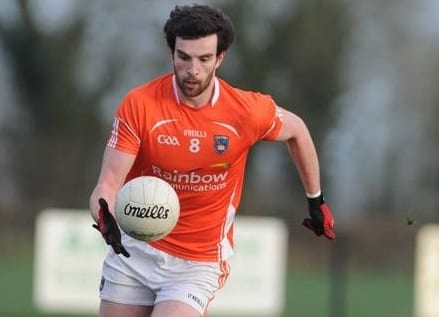 Promotion-chasing Armagh maintained their unbeaten run in this fifth round Allianz Football League Division Three clash at Ennis this afternoon – but there was certainly cause for nerves in the second half.

A totally transformed Clare came out after the break at Cusack Park, and it was obvious it was not going to be all plain sailing for Armagh, as the Banner County had reduced the deficit to just two points after the visitors had led by 10.

But Armagh always have that extra in the bag and, despite being reduced to 14 men, went on to seal victory and keep promotion hopes alive, with Tony Kernan simply outstanding and bagging a brace during an impressive all-round team performance.

The Orchard County knew that two points were going to be crucial in their promotion chase back to Division 2.

Armagh had only been leading Fermanagh at the top of Division 3 on seven points from score difference.

It came after last Saturday’s late equaliser saw the Ernemen take Armagh, now one game away from a place in the league final at Croke Park on April 25, to a 1-10 draw at the Athletic Grounds.

And with Pete McGrath’s youthful Fermanagh beating Limerick 2-19 to 2-9 at Brewster Park this afternoon, it leaves both table-topping Ulster sides just one game away from promotion.

Armagh manager Kieran McGeeney had made no changes to Saturday’s line-up when he revealed his team on Thursday night.

Clare were first to open the scoring with an early point in the first minute and added another courtesy of Jamie Malone five minutes later.

But Armagh were soon in the driving seat and a superb goal from Ethan Rafferty after eight minutes spurred the visitors on, with points following from Andy Mallon and Eugene McVerry and a converted free from Crossmaglen’s Tony Kernan giving the Orchardmen a four point lead.

Armagh were simply coasting along and Aidan Forker added another two points before that man Kernan found the net again and the huge travelling support went wild.

A shell-shocked Clare pulled a point back before Miceal McKenna restored Armagh’s nine-point cushion 25 minutes in.

Goal hero Ethan Rafferty saw himself black carded and Andrew Murnin was introduced, adding his own name to the scoresheet almost immediately to bring Armagh’s tally to 2-7.

Another Armagh point and a converted free for an out-of-their-depth Clare left it 0-4 to 2-8 at half-time.

Whatever was said in the dressing room at half-time saw a very different Clare come out for the second half, with the Banner County adding a goal and five points without reply.

After Armagh’s Andy Mallon picked up a black card, Stephen Harold had a well taken point, Armagh’s first of the second half, to leave Clare within a goal of drawing level. Bad just went to worse from Armagh, who were reduced to 14 men 15 minutes into the half, after Michael Murray picked up his second yellow card. And a well-taken free from Clare left just two points between them.

Tony Kernan added another point before Clare pulled one back.

But there was no keeping that man at bay, and Kernan put the result beyond doubt with another fantastic and well-deserved goal, his second of the afternoon, and the final score of the afternoon four minutes from time.