Armagh hurlers through to All-Ireland final 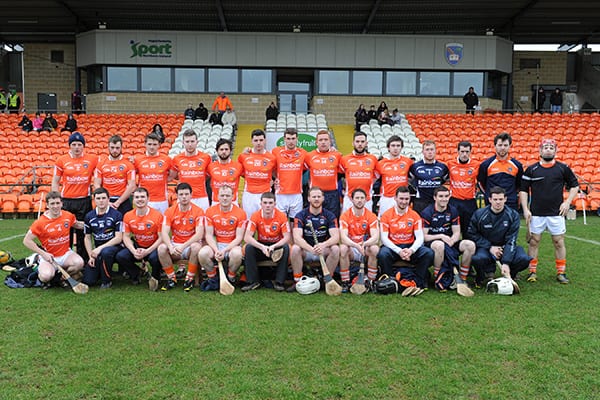 Armagh hurlers have won a place in the Nicky Rackard Cup final, following a good win against Donegal in the Athletic Grounds on Saturday. The Armagh men will face Roscommon, who overcame Tyrone in the other semi-final, on Saturday 6 June in Croke Park.

Nathan Curry got the scoring underway on Saturday with a long-range free, a score that was quickly cancelled out by a converted free from Donegal’s Ciarán Mathewson. The resulting puck out was well-won by Ryan Gaffney who laid the ball off to half back Connor Devlin who took his point well.

Donegal were forced to make an early change with Lee Henderson entering the play and Ciaran Mathewson wasn’t long in hitting his second to bring the scores level again.

Armagh captain, John Corvan, got in on the act to hit a point and when he sent in a high ball, it was won by Eoin McGuinness whose shot on goal crept over the line, in spite of a half block by the Donegal keeper.

Despite conceding the goal, Donegal did not lose their composure and worked the ball up the field, with two successive scores from Mathewson, one from a 65 and the other from a free. Ryan Gaffney got in on the scoring, with two quick points from frees and his club mate Martin Moan hit a good score from play to put Armagh ahead 1-7 to 0-4.

Conor Corvan got his first point of the game following good work from Cahal Carville and Donegal managed to pull one back through Lee Henderson from the dead ball.

With half time approaching, Armagh kept the pressure on and when Conor Corvan went through on goal, it took a great save from Dylan Laverty in the Donegal net to deny him, but Corvan rounded off the half with another point from play.

Donegal opened the second half scoring with Mathewson converting a free, but Ryan Gaffney proved that he was ready to punish any Donegal indiscretion by slotting over two further frees.

The Donegal men however, managed to raise a green flag, when Ronan McDermott who was kept quiet in the first half by Armagh full-back Ciaran Clifford, kicked the ball to the net and he followed this up with a point from play to bring the gap down to 4 points.

Donegal continued to press, but a great block from Clifford soon put an end to the Donegal purple patch, as the ball was worked up the field and Gaffney on hand to slot over a free. Further scores were added by Cahal Carvill and Gaffney from the 65.

Mathewson, Paul Sheridan and Ronan McDermott got scores for Donegal and John Corvan got his second of the game to leave the score 1-15 to 1-10 with 10 minutes to go. Ryan Gaffney added another two 65s to leave his tally at 0-8 for the game and a further two efforts from Donegal brought their score to 1-12.

Second half substitutes David Carvill and Paddy Kelly rounded up the scoring for Armagh to give a comfortable victory and a trip to Croke Park to look forward to.

While Donegal did produce a good spell at the beginning of the second half, Armagh always appeared on top in this tie. Armagh produced a great squad performance with five substitutes playing their part in the win, ten scorers across the field and the full back line keeping the Donegal attack at bay for most of the game.

Speaking after the game, Armagh manager Sylvester McConnell was pleased with his team’s performance and was looking forward to the All-Ireland final on Saturday 6 June.

“A lot of the younger boys did very well and it’s great to have two boys come off the bench to take scores,” he said.

“The most pleasing aspect is that we know there is more in these boys and a Nicky Rackard final is the least that they deserve. The overall aim is to improve the standing of hurling in Armagh and we have received great support in achieving that so far and with the final in Croke Park coming up in two weeks, we look forward to the challenge against a tough Roscommon side.”