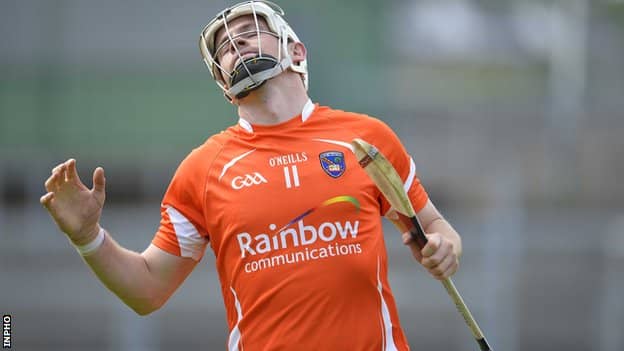 Armagh senior hurlers made it two wins from two in the Conor McGurk tournament on Saturday when they racked up an impressive scoreline against tournament hosts, Queen’s University.

In bitterly cold conditions, Armagh made full advantage of the strong wind in the first half and got a great start with Declan Coulter firing to the net.

While Queen’s hit four points throughout the half, Ard Mhacha hit three times that number, including 0-3 from Declan Coulter,0-2 from Ryan Gaffney, John Corvan and Conor Corvan, 0-1 from Artie McGuiness and Cahal Carville and an impressive long range effort from Nathan Curry.

The second half saw points traded between the two sides with Coulter hitting 0-3, but a goal from Artie McGuiness underlined the control the county men had on this game.

Queen’s added another couple of points, but with just over 10 minutes to play Declan Coulter got his second three pointer to bring the scoreline to 3-16 to 0-8, with the other Armagh score coming through Marty Moan.

As the floodgates began to open, Conor Corvan struck the net twice in four minutes, either side of a Cahal Carville point, and before the final whistle sounded Coulter found space to complete his hat-trick and leave the final score 6-17 to 0-9.

This was another good run-out for Armagh, who have earned their place in the final against Derry, who also won their previous two group games.

Ard Mhacha are due to play Doire in the group stages on Friday 17th January at 7.30pm, before facing the same opposition in the Conor McGurk tournament final on Friday 23 Janaury.