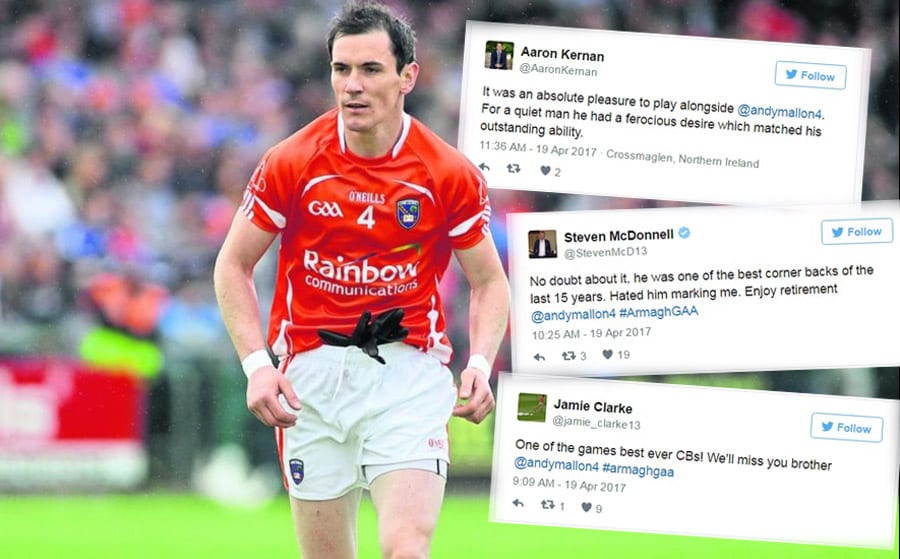 The veteran star and former Pearse Og clubman is hanging up his boots after 13 seasons.

He made his debut for the Orchard County against Donegal in Ballybofey in February 2003, replacing Enda McNulty for that game.

Mallon broke into the star-studded team which had won Armagh’s only ever All-Ireland title in 2002, lining out alongside the likes of Justin McNulty, Aidan O’Rourke and brothers John and Tony McEntee.

He helped Armagh win the National League with a fantastic performance against Wexford in 2005 and it was a season which culminated with him winning an All Star.

Mallon, who lives in Dublin with his family and has enjoyed many highs and lows over his impressive career, was also a huge driving force with Pearse Og over many years.

It was an absolute pleasure to play alongside @andymallon4. For a quiet man he had a ferocious desire which matched his outstanding ability.

No doubt about it, he was one of the best corner backs of the last 15 years. Hated him marking me. Enjoy retirement @andymallon4 #ArmaghGAA

One of the games best ever CBs! We’ll miss you brother @andymallon4 #armaghgaa

What can I say about the gym bud and all round good guy @andymallon4 every game he played he picked up the danger man. Says it all. Legend ????

All the best to @andymallon4 on your retirement from county football.
A great lad and one of the best defenders I’ve played with and against

@andymallon4 was one of the games most honest and genuine corner backs. Never resorted to sledging or bullying. @Armagh_GAA will miss him.

Happy retirement to the Childhood idol and the best defender I have ever played with @andymallon4 ????????????

@andymallon4 Best wishes on your retirement Andy, a true gent and amazing defender.

Had the pleasure of playing alongside this man. One of the best defenders to have played the game! Enjoy retirement @andymallon4 ????????