Craigavon Cowboys look ahead to entertaining game against Wexford Eagles 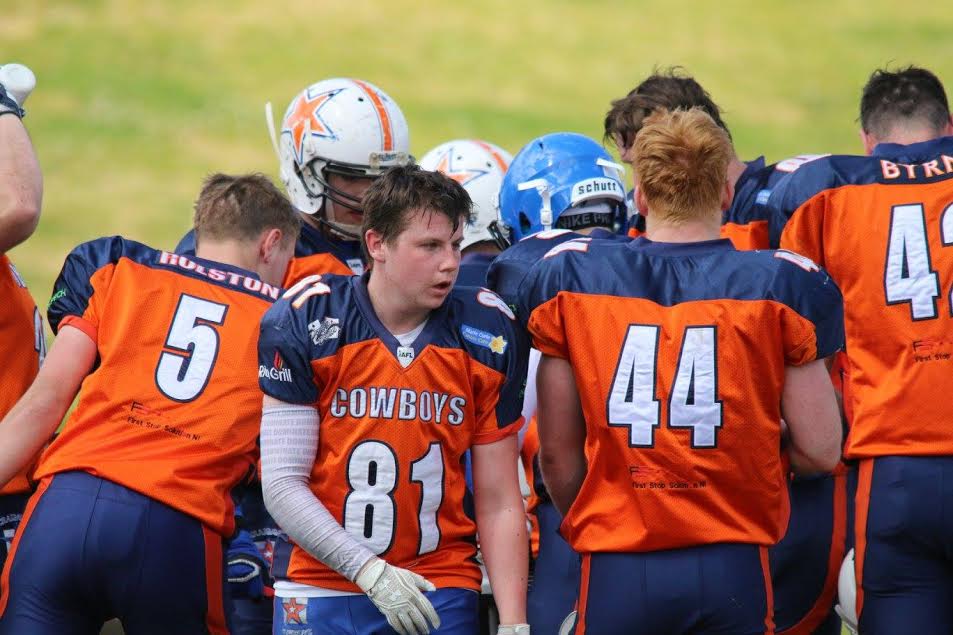 Craigavon Cowboys welcomed an old nemesis in the West Dublin Rhinos on Sunday as the two sides met for the first time outside the SBC.

These games have been very even down the years with usually the home team coming out on top and this match proved to be no different.

The Cowboys approached the game looking to protect an unbeaten record so far while the Rhinos were on the back of an impressive 51-14 win over the SK Soldiers, so both teams were optimistic of taking the W in Portadown.

Both teams started off in stuttering form in their opening drives, being forced to punt with the Rhinos looking dangerous but the Cowboys D bending but not breaking. Then the Cowboys took hold of the game as the offensive line started opening up holes for Andy Herron and Peter Loughran to notch up consistent yards before QB Josh Marchbanks was able to sneak up the middle and stretch the ball into the End Zone.

A missed 2PAT left the game at 06-00 to the ‘Boys and after some tough tackling defence from Jason Duddy and Jo Buchanan the half time whistle blew with the home side in the lead but not comfortable.

The second half started with the Cowboys receiving the ball and they got to work straight away, Herron scorching through some terrific O Line blocking for a 50 yard run which set up Marchbanks to find Ben Fallon through the air for another 30 yard gain.

The Cowboys meant business and slammed the ball home through Shayne Mone as he waltzed through his open lane. Another failed 2PAT left the scored at 12-00 to the Cowboys.

Any Rhino reply was soon halted through a terrific Tackle for Loss by Gavin McConnell and the resulting punt was fumbled by the kicker and recovered by the onrushing Jonny Martin. The Cowboys took full advantage of the field position and ran the ball home through Loughran from 26 yards out. The 2PAT was converted this time as Marchbanks found Fallon open in the End Zone bringing the score to 20-00.

After a Rhinos 3 and out, the Cowboys had one of the highlight plays of the day; Herron found himself in space but looking at three Rhino defenders waiting to swallow him up, a swing of the hips and in a flash he was outside them as all three lay on the ground still looking to the Running Back as he made a 28 yard gain.

The drive stalled which gave the opportunity for the Rhinos to march down the field as they turned to a pass heavy offence, two long pass plays saw them within two yards of the Cowboys’ End Zone but the ‘Boys were not ready to give up a score that easy. Some huge plays from the Defensive Line and Linebackers saw the ‘Boys shut out the visiting offence and force a turnover on downs from two yards out.

The Defence weere not finished there as Gareth McShane managed to intercept a trick play pass and returned the ball to the three yard line.

The Cowboys once again took the advantage of generous field position and pounded the ball in through Marchbanks as the Offensive Line blew up huge lanes and the QB walked into the End Zone. A failed 2PAT brought the score up to 26-00 and that is how the game would finish, a successful day for the Cowboys saw their record extend to 4&0 for the season and a big day for the defence, the second game in a row that the D have not let their opponents score a point.

Next up is a long road game as the Cowboys travel to Gorey to take on the Wexford Eagles in what promises to be another entertaining game.