Tullyroan now looking ahead to biggest weekend of the season 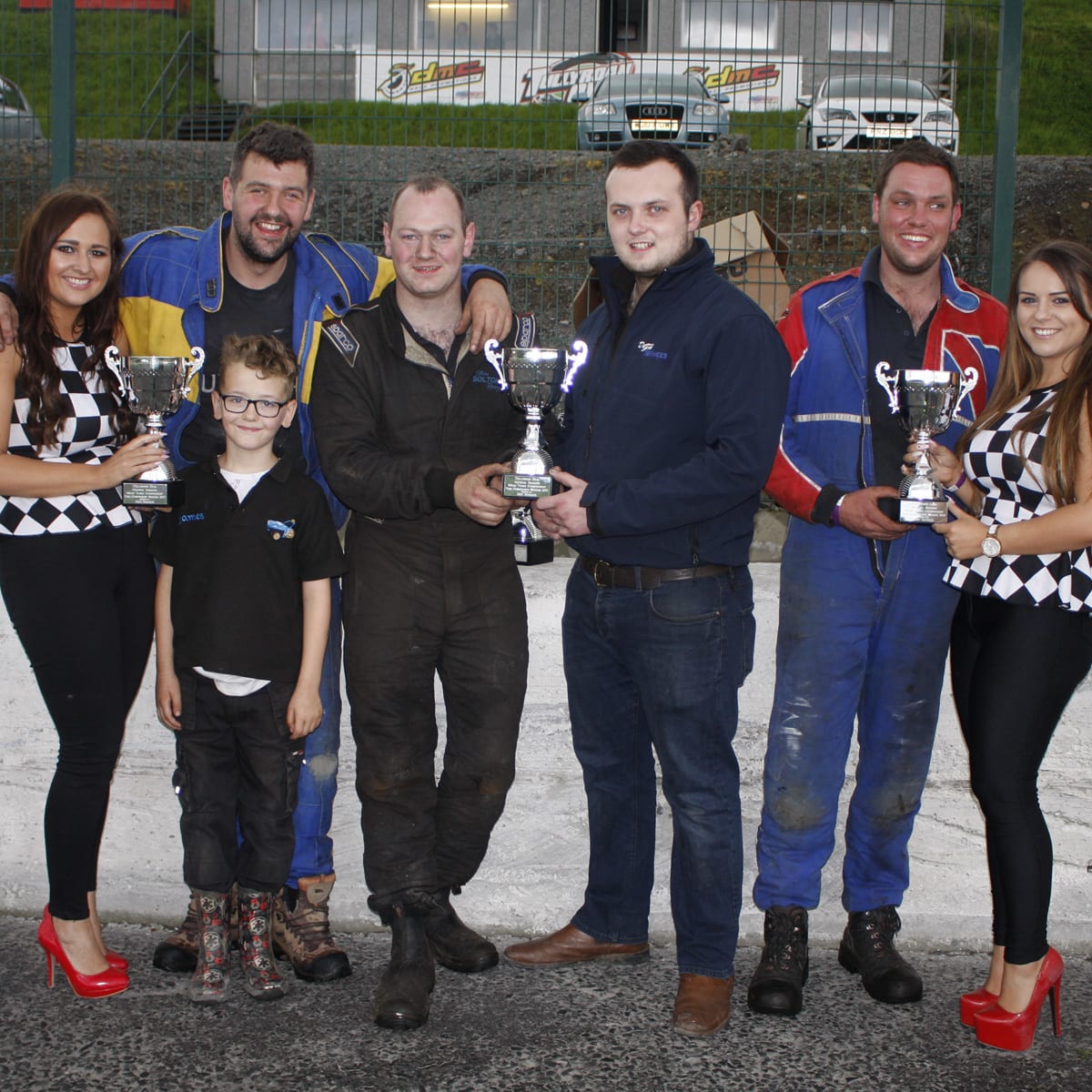 Some fantastic Banger racing was served up to the Tullyroan Oval fans on Sunday afternoon, with an excellent entry for the annual Micro Teams Championship.

Limited to small cars and dominated by Nissan Micra’s and Ford Ka’s, local outfit Team Buckle B came out on top after a thrilling contest, with thanks to a Final and Destruction Derby double for Steven Bolton.

Small cars but big action was certainly true of the Micro Bangers, with two heats, the feature Final and a Destruction Derby to crown the Team Champions for 2017. Bad Company soared into an early points lead when Leonard Dunn raced clear to win a very lively heat one ahead of Steven Bolton and welcome English visitor Craig Cooper.

Even with such a big field on hand, Dunn was able to pull it off again in the second heat, this time ahead of Aaron Clarke and Bolton. Spectacular rollovers for Tom Brown and Cooper punctuated this one, but Dunn  still made sure out front to give Bad Company the overall lead heading into the final.

The Team Buckle aces had Bad Company’s Dunn and Jonny Rutherford in their sights in the final, but Dunn again rocketed into the lead.

Despite Bolton’s efforts and the carnage all around the raceway Dunn held on to take the chequered flag, but was sensationally docked to third by the Stewards for jumping the initial start. Bolton thus inherited the final win ahead of Clarke and the relegated Dunn. Heading into the DD, Bad Company were still ahead of Team Buckle B in the standings, meaning that unless a Buckle car was last car moving then the title went to Bad Company!

Some huge hits quickly decimated the field, with Bolton finishing off Clarke to take the win and the Teams Championship title. Best Wreck fell to Ian Crowley, with Cooper awarded Entertainer of the Day.

Co Waterford veteran Tom Casey was a very welcome addition to the 2.0 Hot Rods as they raced for the Tullyroan Challenge Cup. Stuart Cochrane took the opening heat win ahead of Glenn Bell and Feargal McNally. Heat two saw Bell and then Ryan McClure out front, but when Ryan hit trouble nearing the end McNally was there to pick up the pieces ahead of Bell and Thomas Morrison.

McNally had gained pole position for the final courtesy of points scored, and he led them away ahead of Bell. The National Hot Rods star pressured Feargal all the way to the flag, but try as he may there was to be no way past. McNally rounded out the laps to take a great win over Bell and Cochrane, after third on the road Allen Cherry was demoted for contact.

The dramatic 1300 Stock Cars were on top form as always, with Irish Champion Ivan Elliott bumpering his way past to the heat one win is superb style, finishing ahead of Tommy McCrory and Calvin Blake. Heat two saw McCrory come home well clear to take the flag, but he was adjudged to have jumped the start, and  when the appropriate penalty was imposed that elevated Adrian McKinstry to the win ahead of Blake.

There was action aplenty all around the circuit in the final, with yellow grader Joshua McMullan breaking clear early on.

The upset was most certainly on as the star drivers failed to break free from the pack to run him down. McCrory was the first of the challengers to show, but despite closing in nearing the end McMullan held on for the feature race win. McCrory was good value in second ahead of Blake and Elliott.

Making a rare appearance behind the wheel of his brother’s car, former major champion Alan Haugh showed that he had lost none of his flair with a fine win in the first heat for the ProStocks. He headed home a great battle between William McFaul and Del McLaughlin. Haugh and Norman Purdy swapped the lead in heat two, before a late race caution with Stephen Boyd and Joe Largey stranded on the racing line on the back straight.

The two lap dash to the flag saw McFaul elbow his way past to take a last gasp victory over McLaughlin.

Haugh bumpered past Purdy and Lee Booth to hit the front in the feature race final, before a yellow flag caution for debris on the circuit closed the field right up. British and Irish Open Champion Adam White surged to the front but he was slowing with some sort of mechanical issue in board his Vauxhall.

McFaul saw his chance and closed, going in hard into the final bend to send White wide and slip though for a sensational win. If heat two was last gasp, then the final was even later! White and Karl Smyth filled out the podium places.

Neil Martin took victory in the first heat for the Reliant Robins ahead of Ian Bolton, with John Stewart rolling over as he crossed the line in fourth behind Haley Bevan. Bolton just edged clear of Martin after a great battle to take the heat two victory.

Bolton and Martin shared the front row for the Tullyroan Challenge Cup final, with Bolton having the pace to pull clear right from the off. Ian came home to take the victory over Martin, with Bevan in third ahead of Mark McCartan.

Attention now switches to the biggest weekend of the season at Tullyroan Oval over this coming weekend, September 2nd/3rd.

Racing starts at 4.30pm on Saturday and 1pm on Sunday.