Biggest field of season so far for Lightning Rods 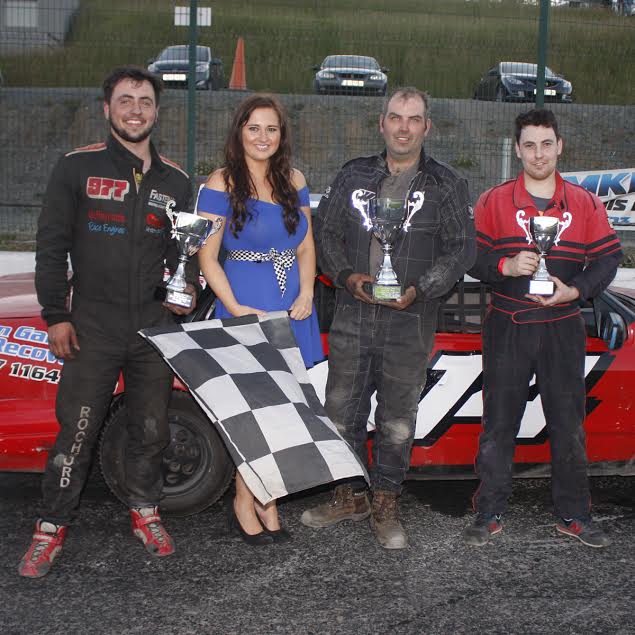 A fine mid-summer’s evening at Tullyroan Oval on Saturday saw some great racing on track, and the big winner was Dungannon’s Ally Neill who romped home to lift the annual Tullyroan Challenge Cup for the Lightning Rods.

The biggest field of the season so far arrived in the pits to do battle for the Lightning Rods Tullyroan Challenge Cup, raced over two reverse grid qualifiers before the final itself would see the top points scorer gain pole position. Ricky Shaw set the pace in the opener from pole position, but Aaron Stewart moved ahead early on to take the win over Mark McCambridge and Mark Corry.

The second heat saw Ally Neill the first to show, before a yellow caution period for the stricken Martin O’Donovan. The restart saw a number of penalties handed out as some were much too eager to get back into action, whilst up front Irish Champion Richard Stewart found a way past Neill to take the victory. Ally held on for second ahead of Jordan Rochford.

Stewart and Rochford shared the front row for the Tullyroan Challenge Cup final, only for Stewart to overcook things into turn one and allow his cousin Aaron Stewart through to the lead.

Things were very slippery underfoot as the drivers were quickly finding out, and a three abreast moment at the end of a breathtaking opening lap saw Neill through to the lead ahead of Corry, with both Stewart’s and Rochford now gathering themselves together but way down the order.

As Corry put pressure on the leader, Rochford’s fightback saw him right there once again in third. Corry then departed the lead pack after a mistake on turn two, but up front Neill held Rochford off all the way home to land the biggest win of his career so far, and in some style too. Rochford, Aaron Stewart, Vince Litter and McCambridge filled the places.

The 1300 Stock Cars also gridded their best turnout of the season so far in the second round of the Ryan Wright Signs Iron Man Series, and they produced some great heavy metal contact. An all action final exploded into life in the closing stages, when Aaron Rainey challenged long time leader Jack Kearney.

Adrian McKinstry came in hard with the bumper too, and down the back straight for the final time they were in the wall and on the grass – in fact they were heading every direction but the right one! Kearney pulled all together to just get over the line first, but unfortunately he was later removed from the win due to a technical issue in post race scrutineering.

That handed the trophy and race tyre from the series sponsors to Rainey ahead of McKinstry and Ivan Elliott. Earlier Thomas McCrory inherited the heat one win after Kearney’s load up, with McKinstry the victor in heat two.

The Rookie Bangers returned for another excellent outing, with plenty of action on track to entertain the spectators. Ben McKenna went ahead early in heat one before Paul O’Connor took up the running. Just when Paul looked home and dry, he collected a spinning Killian Eager and his race was run.

That handed the advantage to Sammy Fisher who took the win over Ger O’Beirne and Rodney Herron’s VW Beetle. Heat two had an early stoppage when Fisher lost a wheel, before Peter McKenna-Murray blasted ahead to take the win.

O’Beirne held on well to take the runner up slot again despite the best efforts of others to stop him.

There was plenty of action during the feature race final too, and that despite a lot of fluid going down on the track which slowed the pace considerably.

Christy Bradley coped admirably with the conditions as he took an excellent win, with Fisher good value in second ahead of Trevor Farrell and Thomas Megarry.

Thomas Morrison set the early pace in the opening 2.0 Hot Rods heat as they chased points in their final World Championship qualifier. At mid distance he succumbed to pressure from Ryan McClure, and McClure sped home to record the win over Adam Best and European Champion Stephen Emerson.

Morrison was again the first to show in heat two, and this time he was challenged by a rapid Stuart Cochrane who was making a quick return to the cockpit having broken his wrist last weekend.

Morrison called on all his years of racing experience to withstand the pressure and take a very welcome win, his first in the formula. Cochrane and Emerson followed him home.

The final was all about Emerson though, the European Champion blasting past Morrison on lap nine to motor ahead and take the silverware ahead of Cochrane and Feargal McNally.

The young stars of the Ninja Karts rounded out the programme, with recent newcomer Max Hobson impressing in the opening heat as he led for much of the distance.

He was pipped at the post however by Aaron Ward, who went past on the run to the flag to take a great win over Hobson and Samuel Percy.

Hobson made no mistake in heat two, racing clear of the field to take his first ever win after a great drive. Daniel Stewart and Corey Stirling filled out the places.

The feature race final over the extra distance was always going to be interesting once Hobson again grabbed an impressive lead early on. The star men were bearing down on him fast, and only for a slight hesitation amongst backmarkers Max could well have taken his first ever final win.

The beneficiary was Stirling, as he swooped past on the final lap to take the chequered flag and the silverware, with Stewart grabbing second ahead of Hobson who was undoubtedly the star of the night.