Work well on schedule for restoration of William McCrum grave 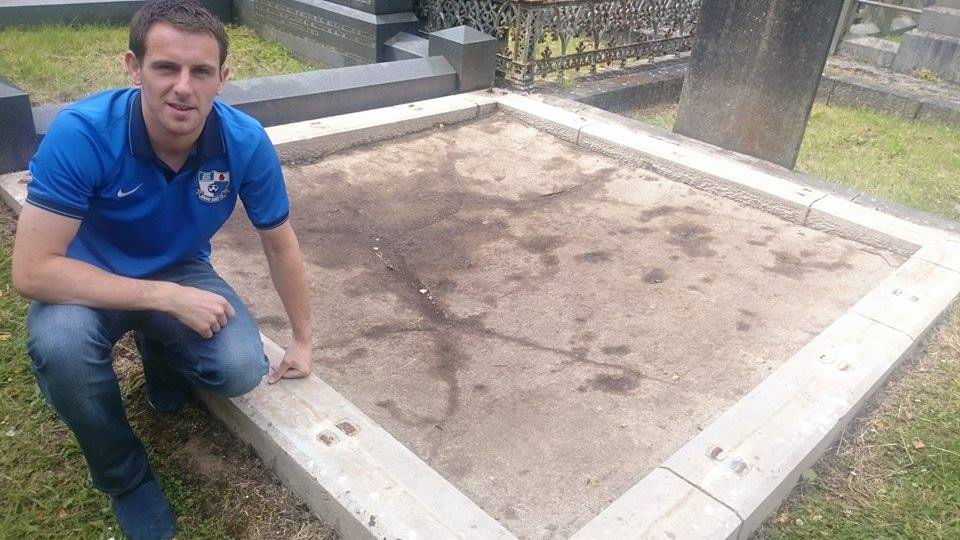 Work is well on schedule for the restoration of the grave of penalty kick inventor William McCrum.

And a special service of dedication will take place on Sunday, August 2, at St Mark’s Parish Church in Armagh.

The grave, which had fallen into a real state of disrepair, lies within the church graveyard.

In February, Armagh I reported that FIFA had agreed to pay to have the grave restored. The decision was made at the IFAB meeting held in Belfast and came just days after the launch of the campaign to raise the estimated £7,000 required.

William McCrum, who came from Milford, as a member of the Irish FA, proposed the idea of the penalty kick in 1890. Down but not out, Northern Ireland football fans in the County Armagh village of Milford decided to see it through themselves – and the determination was unprecedented. It has been a busy time for all involved but they are delighted at how it is proceeding.

The grave surround was taken off to be restored to its original condition, and stones removed and around the grave cleaned up.

Already, as the pictures show, you can see the detail in the surround which had disappeared long ago due to the condition of the grave.

The work is due to be completed before the end of the month and there will be a church service held in St Mark’s in Armagh on Sunday, August 2 at 7pm.

Johnny Jemeson, who was part of the team at the 1982 FIFA World Cup when Northern Ireland reached the second round, will give his testimony.

Philip Johnston, speaking on behalf of Milford Northern Ireland Supporters’ Club, said: “We would like to encourage everyone to come along to the event to mark the celebration of the restoration of the McCrum family grave.

“The Milford NISC a few years back started a campaign to try to restore the grave but, with no support from funding  bodies, we enlisted the help of the Amalgamation of Northern Ireland Supporters’ Clubs who helped secure funding via FIFA.

“As a result, the grave is currently being restored. “It shows just how great our wee country truly is and we can’t thank everyone enough who has made this all possible, especially the AoNISC, who have done so much of the work to help have the grave restored.”

The pictures show Philip Johnston, of the Milford NISC, at the grave; the grave before the work began, with Milford NISC representatives, along with AoNISC and the Rev Malcom Kingston; the grave surround, taken off to be restored to its original condition, and stones removed and around the grave cleaned up; and the work currently done to the surround of the grave, where you can see the detail which had disappeared long ago due to disrepair.