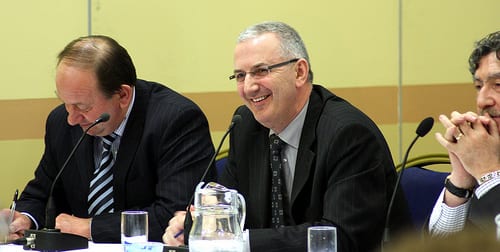 William Irwin has backed the Unionist pact which sees the DUP MLA drop from the Westminster race in order to support Danny Kennedy’s campaign in Newry and Armagh.

Mr Irwin said: “The unionist community has clearly said that it wants to see unionist parties working more closely together. There is far more which unites unionism than divides us and agreed candidates are a demonstration of that.

“The people of Newry and Armagh currently have an absentee MP who receives Parliamentary allowances yet does not turn up to Parliament to do the work of an MP. Sinn Fein take the pay but stay away. The desire to elect someone who will actually do the job they are paid for is something which should unite not just unionists, but many people right across the community.

“I know that those who would normally give their loyal support to the DUP, will in this circumstance, back the agreed unionist candidate in order to give this Constituency representation in Parliament. In a hung parliament after the election, such representation could be absolutely vital to maximise Northern Ireland’s influence.

“Whilst there may be disappointment that agreement could not be reached in some other constituencies, the very real challenge is now to ensure maximum unionist turnout across Northern Ireland and to return the strongest team of MPs to advance Northern Ireland and the Union in Westminster.”