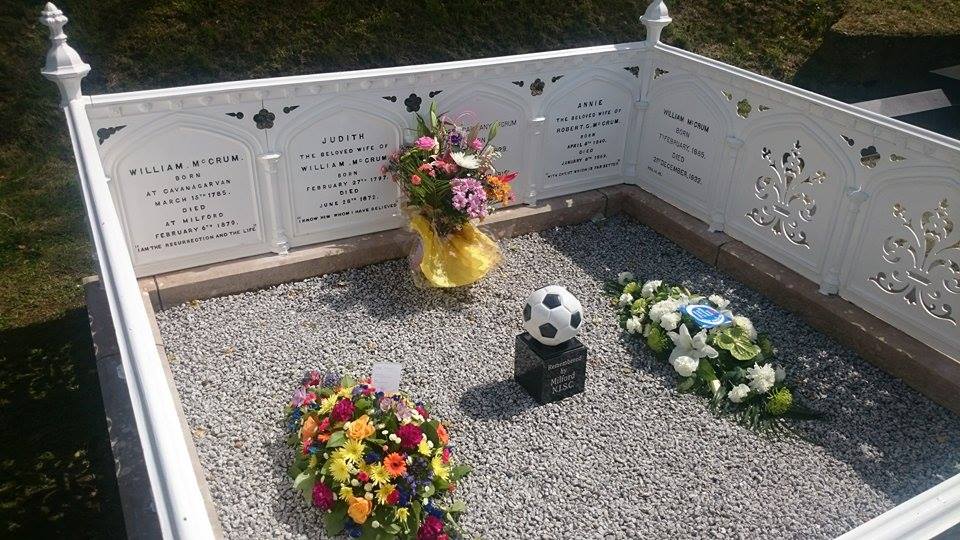 It was a fitting and emotional occasion and marked the end of a lengthy campaign – followed by months of hard work.

And the fully restored grave of penalty kick inventor William McCrum was well worth the effort.

As the pictures show, the members of Milford Northern Ireland Supporters Club have excelled themselves.

Last night, St Mark’s Parish Church in Armagh saw upwards of 180 people gather for a special service to mark the completion of the restoration of the grave.

And outside, in the adjoining churchyard, the actual dedication took place.

Milford NISC, supported by the Amalgamation of NI Supporters’ Clubs, are to be congratulated on their efforts.

Killylea Silver Band played hymns at the service, where guests include Jim Shaw and William Campbell, from the IFA, Johnny Jameson, part of the team at the 1982 FIFA World Cup when Northern Ireland reached the second round, who gave his testimony, and NI international and former Leeds United star Warren Feeney.

A piper then led those present afterwards as they made their way toward the grave.

The grave had fallen into a real state of but much hard work has seen it completely restored.FIFA had agreed to pay for the work. The decision was made at the IFAB meeting held in Belfast and came just days after the launch of the campaign to raise the estimated £7,000 required.

William McCrum, who came from Milford, as a member of the Irish FA, proposed the idea of the penalty kick in 1890.