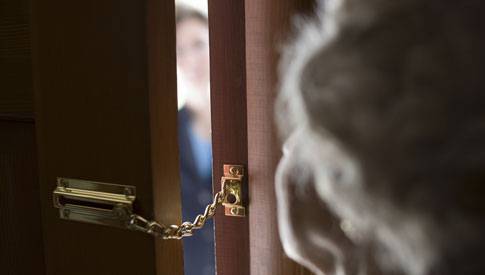 Detectives in Lurgan are appealing for information following two incidents of bogus callers and are urging the public to be vigilant and report any suspicious activity at the earliest opportunity.

Around 5.30pm on Tuesday, 21 April, a male claiming to be from the Water Board, called to a house in Carnany Road, Mayobridge. He attempted to push his way into the house but was prevented by the occupant and family dog.

The man made off in the grey/silver car which was parked close by. It is possible that a further two males were in the car.

The bogus caller is described as being around 5ft 8in tall, of stocky build with short, brown hair. He was wearing a brown top and brown trousers.

In a second incident a man called to a home in Ballyroney Road, Banbridge, around 6.30pm. He claimed to be from the Water Board and asked the female occupant to go to the kitchen and turn on the water to check for sediment. While the occupant was in the kitchen the man ransacked the house.

Detective Sergeant Lisa McClure said: “These crimes target some of the most vulnerable members of our community in their own homes. We are asking all residents to be vigilant – if you see a vehicle which looks out of place or not quite right, please phone us straight away.

If you observe callers in your local area and are not sure of their purpose, phone us straight away.