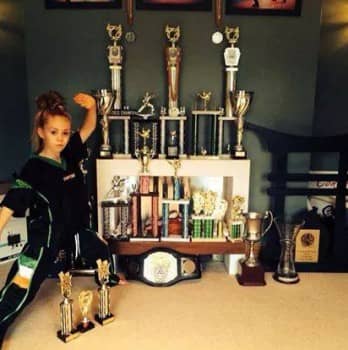 And an eight-year-old Keady schoolgirl and double world champion stole it, quite literally!

Jessie-Jane McParland gave a fantastic display of her kickboxing and martial arts skills on the annual classic.

The Ryan Tubridy-helmed TV outing dishes up a large portion of nostalgia with a super side of wow!

And the kids are always what it’s all about and Jessie-Jane stunned audiences with her prowess and made Co Armagh proud.

Classical pianists, opera singers and a Chitty Chitty Bang Bang turn all featured but, as our Armagh I followers hailed, we feel Jessie-Jane turned it from the Late, Late to the Great, Great Toy Show.

Last night, shortly after it was broadcast, we featured just a seven second clip of the Keady girl’s appearance and the reaction was huge!

Over 40,000 people have since viewed that little clip of the fearless Jessie-Jane and over 650 have so far shown their approval by hitting ‘like’ on the post.

The comments gave an indication of the great pride that the local community has in this star of the future!

One wrote, “Best thing on the toy show last night”, while another commented, “Fantastic performance – stole the show”.

Yet another posted: “I think Santa needs to be well stocked up when he visits Keady…or else..”

We at Armagh I could not agree more with all the sentiments expressed.

Jesse Jane McParland is a remarkable young lady and a huge star in the making.

Jesse-Jane has earned herself the name of ‘Golden Dragon’ and is becoming something of a stand out figure within the world of martial arts and kickboxing.

She had been actively training ahead of the WAKO event – the Cadets and Juniors World Championships – which were held in Rimini, Italy, in September.

The people of her home town of Keady, so rightfully proud of her global success, were staged a special homecoming in the centre of the town!

At only eight years of age, it’s hard to know what lies ahead or where her success will take Jessie-Jane.

Check out the video below and you will get an idea why this young girl has the world at her feet!!