Update due on vital restoration of Moneypenny’s Lock 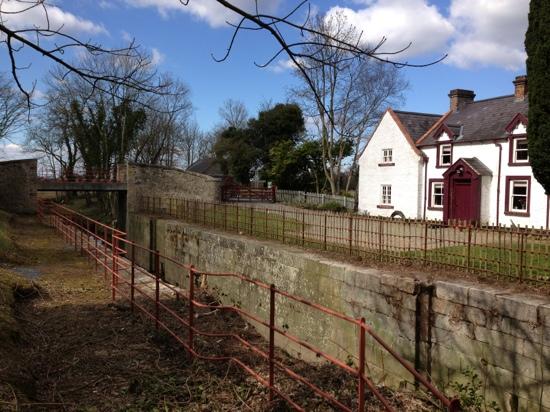 An update on plans to restore Moneypenny’s Lock – the last of the 14 locks on the Newry-Portadown Canal – will be brought back to Armagh City, Banbridge and Craigavon Borough Council in June.

An application for funding to aid the restoration work, which is estimated in excess of £56,000, has been made to the Heritage Lottery Fund.

Sometime after the canal was abandoned in 1949, the lock gates at Moneypenny’s became impossible to open due to the build-up of silt on the upstream side. To remedy this problem, which was exacerbating flooding upstream, the lock gates were destroyed using explosives.

But, unfortunately, this also completely destroyed the lock cill.

When volunteers from the Inland Waterways Association of Ireland (IWAI) were clearing away vegetation, they uncovered a major undermining problem with the stonework of the lock.

It was determined that the removal of the cill in the 1950s had led to serious erosion of the bed of the lock, which now left the stone walls undermined and in a vulnerable condition.

The lock is both a Scheduled Monument and falls within the boundary of the Listed Buildings on site.

And, as owner of the designated lock chamber, the council has the responsibility to protect it and to prevent its degradation.

The Newry Canal is actually considered by Rivers Agency to be a ‘designated drain’ and any works to the structure of the canal need to be considered in terms of their possible effect on drainage and flooding.

To mimic the effect of a restored cill, the IWAI volunteers installed a temporary sandbag cill and, while it lasted, this demonstrated that a restored cill would not have any adverse effect on water levels on farmland upstream.

This information was invaluable as it provided the data to Rivers Agency which then enabled them to give their consent.

In 2014, an engineering consultant was appointed to carry out a survey of the lock and to define a method for re-instating the cill and lock bed.

The report was completed in April 2015 and gives recommendations for repair and some estimated costings for the work.

The consultant had liaised with both Rivers Agency and NI Environment Agency, both of which have indicated their consent for the work to take place.

The cost of replacing the cill and the associated remedial works has now been estimated at £56,650.

Officers submitted a preliminary application to Heritage Lottery Fund who have promised on whether they feel the project is feasible for them to fund.

When more information is obtained on this, a further report will be brought back to Committee in June.