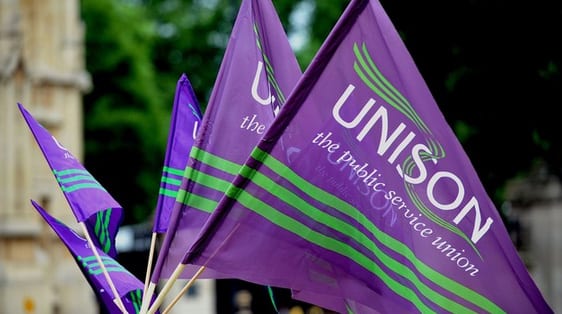 Tens of thousands of union members across the Province will go on strike tomorrow in one of the biggest days of industrial action ever seen here.

Schools, health and social care, public transport and emergency services will be among those affected by the public sector workers’ walk-out.

And the extent of the strikes, in protest at budget cuts and job losses, is unlikely to be fully known until the morning.

Among the unions participating are Unite, UNISON, NIPSA, GMB and INTO and they are aiming to for a show of strength by members never before seen in the Province, with services hit right across the board.

It relation to schools, it will be up to principals to decide if schools will close.

It is expected that in some cases they will only be kept open for senior students who are sitting senior examinations.

Many more, in the region of 500 across the Province, will remain closed.

The action will not only hit teachers, but everyone from canteen staff to school bus drivers.

The Southern Education and Library Board in Armagh said that it expects school transport will operate as normal with minimal disruption.

But a spokesperson said: “There remains the possibility that some home to school transport services will not operate.

“Where there is no service in the morning, this will also apply in the afternoon; and parents will need to make alternative arrangements to get their child/children home.

A number of services will NOT be operating tomorrow and we have listed these at the end.

Unions have agreed a protocol in relation to emergency situations and this will apply to both the Northern Ireland Ambulance Service and NI Fire and Rescue Service.

It is expected that there will be no response to cases which are considered urgent but not classified as life-threatening.

The Department of Health had said that extensive planning had been taking place to keep disruption to patients and clients at a minimum during the planned day of action.

A spokesperson said arrangements have been put in place to “ensure that critical services will be maintained” and that “cover will be provided for emergency services and activities”.

The spokesperson said:”This will include some outpatients, inpatients and the most vulnerable who require care in a community setting and in residential and children’s homes.

“There will be cancellation of non-critical planned procedures and appointments.

“While every effort will be made to maintain services as far as possible, it is likely that patients and clients may experience delays on the day.

Translink NI tonight remainded customers that action by the Unite and GMB trade unions means that all train and bus services will be cancelled.

It takes effect with cross-border travel from later tonight (Thursday).

Ciaran Rogan of Translink said: “I would like to apologise to all our passengers who will be inconvenienced by this strike action which is unfortunately beyond our control.

In relation to schools’ transport, Mr Rogan added: “We are in touch with the Education and Library Boards to find out if schools are open on Friday and to discuss options for transport.”

Libraries, MOT centres, and jobs and benefits may also be hit and, as with the case of schools and hospitals and health facilities, the onus is being put on individuals to check first.

NIPSA, Northern Ireland’s largest public service trade union, tonight made a final call to around 40,000 of its members in civil service departments and related non-departmental public bodies, health and social care sector, education boards (including schools based staff) and libraries, to participate in the strike action.

“Early indications are that the strike will be heavily supported, sending a clear message to the NI Executive and to the Westminster Government that there is widespread anger at the impact of the austerity policies being forced upon the people of Northern Ireland.

“NIPSA requires an unambiguous commitment from the NI political parties which will have MPs elected to the Westminster Parliament that they will use any leverage they have to force an adequate public expenditure settlement for Northern Ireland which doesn’t visit misery on those who rely heaviest on public services.”

A series of pickets are being planned, including at the Armagh Jobs and Benefits Office, from 7.30am onwards.

Other pickets locally will include at Tower Hill in Armagh, Craigavon Area Hospital, Daisy Hill Hospital in Newry, and Lurgan Hospital, the Southern Education and Library Board headquarters on the Mall, Lurgan Jobs and Benefits Office – between 7.45 am and 11am – Portadown Health Centre, Portadown Jobs and Benefits Office, the Probation Board in Portadown, and the Rivers Agency’s Craigavon Depot at the Seagoe Industrial Estate.

The Irish National Teachers Organisation, which has over 2,000 members alone in the Southern Education and Library Board area, is planning pickets and marches across the Province tomorrow.

The main march will take place in Belfast, assembling at Writers’ Square at 12noon, leaving at 12.30pm and arriving for a mass rally in front of City Hall at 1pm.

While there is no planned rally in Armagh City, there will be a rally assembling at Daisy Hill Hospital in Newry at 1pm, which will be addressed by Kevin Daly, INTO’s Southern Area post-primary representative, and another at 2pm at South Tyrone Hospital in Dungannon, where the speaker is Mary Dorman, the union’s Southern Area primary representative.

Among the school transport routes confirmed cancelled are the following: