Tunnel drinking den to be ‘alley-gated’ 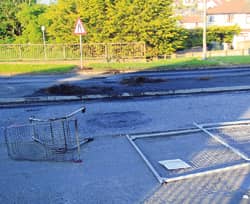 AN underpass beneath the Killylea Road in Armagh – which has been a magnet for underage drinking and anti-social behaviour for many years – is likely to be ‘alley-gated’ and closed off to the public, Armagh I can reveal.

Regional Development Minister Danny Kennedy has signalled a fresh impetus to get something done after meeting on site with Newry and Armagh Sinn Fein MLA Cathal Boylan and City Councillors Cathy Rafferty and Roy McCartney.

They described the meeting this week as “very positive” and hope that such a barrier will protect residents and their properties.

Known locally as the ‘Tunnel’, the delegation say the location is renowned for young people gathering to drink carry-outs, light fires and generally cause annoyance, fear and intimidation for the local residents, many of whom are elderly or have young children.

In one recent incident, residents at Nialls Crescent had to be evacuated after a shed caught on fire. And, as our picture shows, the burning and vandalism is not confined to underground. Fencing erected was placed across the Killylea Road in June and an attempt made to block traffic by burning tyres.

Speaking after the meeting, Assemblyman Cathal Boylan said Minister Kennedy had ljstened to – and taken on board – the concerns expressed on behalf of the local community.

Mr Boylan told Armagh I: “He (the Minister) has agreed in principle that the local Roads Service will work with a local promoter to find a suitable resolution that will be of benefit to the  residents.”

Councillor Rafferty added: “Myself and Cllr McCartney spoke to a number of residents afterwards who were delighted to hear that agreement to alley-gate this tunnel has been made.

“We will be seeking to progress this scheme as quickly as possible and the first actions will be an independent consultation with the local community. I would urge everyone who wishes to see a resolution to this problem to engage with this consultation and allow us to move this forward.”

In addition, Councillor McCartney thanked Minister Kennedy and local PSNI Inspector Nigel Graham, who provided details of incidents at the location over the last number of years.

He said: “I feel once the Minister understood the sheer number of reported incidents – leaving aside those that were not reported to the PSNI – he realised that there was justification to allow a scheme to progress at this site.

“I know there is a process to go through, but I am confident there is goodwill from all concerned to resolve this matter in the coming months. Local people have been calling for action for a long time on this particular problem and now we feel we have overcome a significant hurdle to deliver the outcome they have been calling for.”