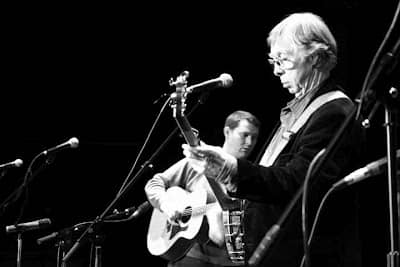 SDLP Councillor Thomas O’Hanlon has welcomed the news that DOE Planning Service has given the go ahead for the new Tommy Makem Community and Arts Centre in Keady.

The Keady councillor is also calling on the council to explore a formal link between internationally-renowned folk musician Makem’s hometown Keady and his adopted homeplace of Dover, New Hampshire.

The approval for the centre will be presented before Armagh City and District Council tonight (Monday) and Cllr O’Hanlon, chair of the council group in charge of the project, expressed his delight at the news.

“The new Community Centre for Keady has been a long time coming and to finally get Planning Permission means the end is in sight,” he said.

“We meet again in the coming days to put the final touches to the tender documents and then the project will go out to tender and a builder appointed.  A separate tender process has been carried out for the demolition of the existing building so it’s now all systems is go.

“This project, as well as the development of a new play park for Keady are key capital projects for the Council this year and we are keen to see works begin on site as soon as practically possible.

“The new state of the art Community Centre and exciting Play Park are much very needed and Councillors and indeed the local community are anxious to see works begin as soon as possible.”

Cllr O’Hanlon is calling on Armagh City and District Council officials to make contact with their counterparts in Dover, USA, and open up discussions about entering into formal twinning arrangement between the two cities.

“Tommy Makem was known the world over.  He never forgot where he was from and despite settling in Dover New Hampshire, he always remained proud of the place of his birth,” he added.

“Just as he was proud of Keady and Armagh, the people of Dover are very proud of their most famous adopted son Tommy Makem.

“Over recent days, I have been in contact with representatives from Dover who are keen to enter into a formal twinning arrangement between our two cities.

“At this point, I have asked that Council officials make initial contact with the representatives in the US and establish what a twinning arraignment would look like and what would be involved.

“This can be as expansive or as limited as each side wish, but I believe it would be wrong not to explore the potential which is there and to give real consideration to developing strong links to benefit both our cities.”