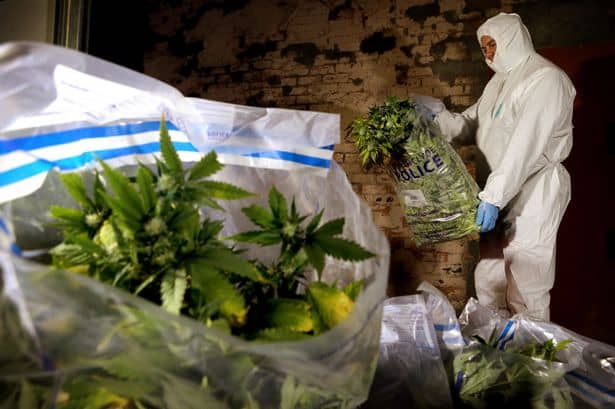 Three men were arrested in Portadown after a police raid in Craigavon uncovered a cannabis factory.

Following a planned search of a property in the Obin Street area of Craigavon yesterday, police from E District Tactical Crime Unit uncovered a cannabis factory. A quantity of suspected herbal cannabis plants was seized.

Police conducted a follow up search of a property in the Markethill Road area of Portadown. Again a number of suspected herbal cannabis plants were seized.

Detective Inspector Keith Gawley, Tactical Crime Unit said: “Three men, aged, 22, 28 and 44 were arrested on suspicion of a number of drugs offences. The 22 and 28 year old men have been released on bail pending further police enquiries and the 44 year old man remains in Police custody.

“The estimated street value of the herbal cannabis plants is believed to be approximately £15,000.

“I know tackling the scourge of drugs is something the local community want us to focus on and this find and arrests highlights our determination to do so. I would like to thank those members of the community who continue to support us in our efforts to stop this drain on our society. Without their courage and assistance we could never hope to achieve such results.

“I would appeal to anyone who has concerns about drugs in their community to contact police. We will look into any report that we receive as we work with the community to reduce the harm caused by illegal drugs.

“I would appeal to anyone who has any concerns or information about illegal drugs to contact their local Police on the non-emergency number 101. Or, if someone would prefer to provide information without giving their details they can contact the independent charity Crimestoppers and speak to them anonymously on 0800 555 111.”

*Main picture for illustration purposes only