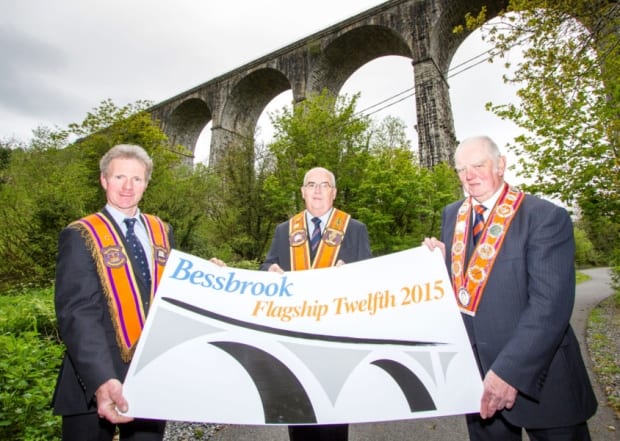 The largest of 18 Twelfth demonstrations to be held on Monday will take place in County Armagh – in Bessbrook.

And Bessbrook District LOL No 11 expects that upwards of 15,000 spectators will turn out for the occasion.

The organisers were recently afforded ‘flagship Twelfth’ status and are looking forward to hosting the County Armagh Twelfth Demonstration, which is the biggest day in the annual parading calendar.

Some 5,000 Orangemen and women will parade along with more than 80 bands – pipe, silver, accordion and flute. Lambegs as always will feature prominently.

The 11 district lodges are made up of 154 private lodges, and also taking part in the procession will be ladies from the Women’s Institution and junior lodges.

Local bands Crimson Arrow Pipe Band and Bessbrook True Blues will walk with the lodges of Bessbrook, the smallest of the 11 county districts.

The brethren will assemble at the foot of the Kidds Road, making their way through Bessbrook before finishing at the demonstration field just past the Orange Hall.

At 8am, Bessbrook brethren will parade to the Kingsmills Memorial for a short service to commemorate the 10 local Protestant workmen murdered by the IRA in January 1976.

At the demonstration field the resolutions will read, proposed and seconded and the guest speaker will be Grand Master Edward Stevenson.

The first of the bands will leave the field for the return journey at 3pm, and this time Bessbrook District LOL No 11 will be last out.

With flagship status, a host of activities had been planned leading up to the demonstration.

And tonight (Saturday) July 11, there will be a Family Fun Night in the village.

This gets underway at 6.30pm with a Pipe Band Tattoo at Bessbrook Town Hall, followed by a fancy dress parade from the Town Hall to the demonstration field, on the Maydown Road, at 7.30pm.

There will be characters from the hit movie Frozen as well as Disney favourites.

The whole evening will culminate with a fantastic fireworks display.

The Twelfth demonstration then takes place on the Monday, July 13 – owing to the fact that July 12 falls on a Sunday.

Police in Newry and Mourne, meanwhile, are warning motorists of traffic delays in and around Bessbrook on Monday.

There will be diversions in place on the following roads:

From 8.30am to 9.10am diversions will be in place at Main Street, Fountain Street, College Square West, North and East, Main Street and Millvale Road.

From 9.30am to 1.30pm diversions will be in place at McKnight’s Hill, Derrymore Road, Boiler Hill, Fountain Street, Wakefield Terrace, Fountain Street, College Square West, North and East, Main Street and Maytown Road to the field.

From 3pm to 6pm diversions will be in place at Maytown Road, Millvale Road and the parade will disperse at Millvale Road/Doctors Hill.

Local residents and carers will be facilitated.

If you are travelling to Newry or Armagh you are advised to find an alternative route and avoid the A28 – Armagh Road. You should also allow extra time for your journey.

Further information in respect of this event is also available via the organiser’s Facebook page https://www.facebook.com/BessbrookOrange